When the pandemic hit their dine-in business in Penang and PJ, Yin’s started a food mart to stay afloat

Yin pouring the kaya jam into a bottle. — Picture by Steven Ooi KE
Follow us on Instagram, subscribe to our Telegram channel and browser alerts for the latest news you need to know.
By OPALYN MOK

GEORGE TOWN, March 21 — While Yin’s Sourdough Bakery and Cafe is pretty established in Penang, it too suffered a drastic drop in business due to the Covid-19 pandemic.

The bakery and cafe has an offshoot in Petaling Jaya and two other restaurants, Ying’s Wholefood Manufactory, on the island so the business model had relied heavily on dine-in previously.

However, with the movement control order (MCO) and various SOP restrictions that came with dining in, the number of customers frequenting their restaurants and cafes dropped.

“Dine-in makes up about 70 per cent of our overall business but with the MCO, we had to think of ways to diversify so that we do not rely too much on dine-in,” said founder Chan Su Yin.

She said they decided to turn their focus on making products for their retail section so that they can sell other food products instead of only delivering food through food delivery services like Grab and Foodpanda.

The bakery and cafe has over 30 employees and they did not want to resort to cost-cutting measures that could affect their employees.

Chan said they started making sourdough noodles during the first MCO last year so customers can order and cook them at home. 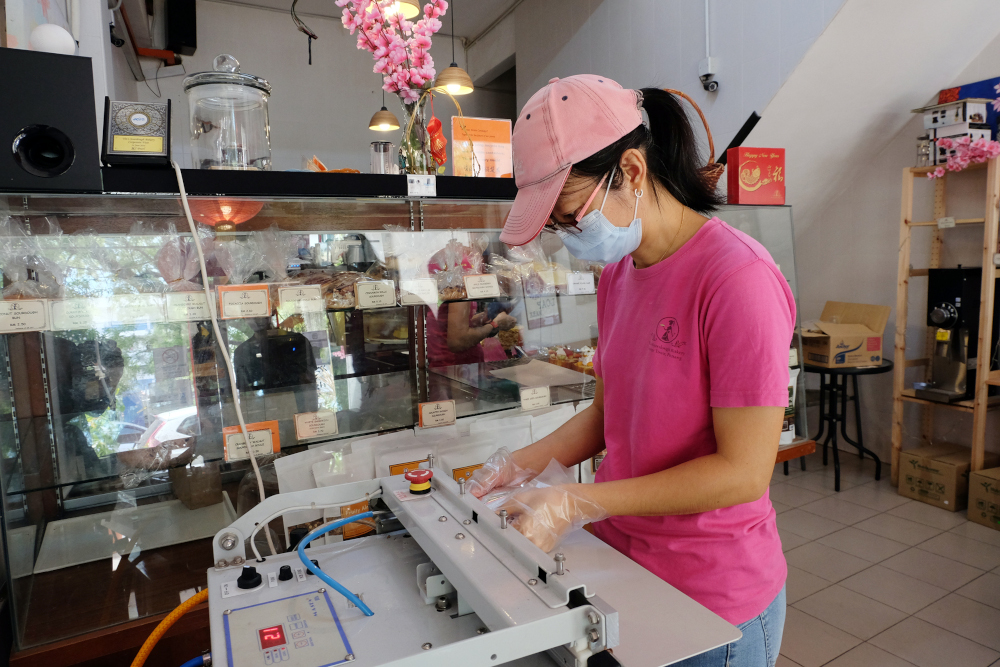 The noodles are made from a sourdough starter that is naturally fermented and are then air dried.

They come in three flavours: Original, pumpkin and spinach. Each pack of noodles is made with basic and natural ingredients such as unbleached flour, sourdough culture, filtered water, fibre and salt.

She said they originally made the noodles in their own kitchen but it did not keep well. They then found a manufacturer with a good air drying facility to air dry the noodles so they can keep longer.

“We also pack our homemade sausages and chicken luncheon meat so customers can buy back to cook,” she said. 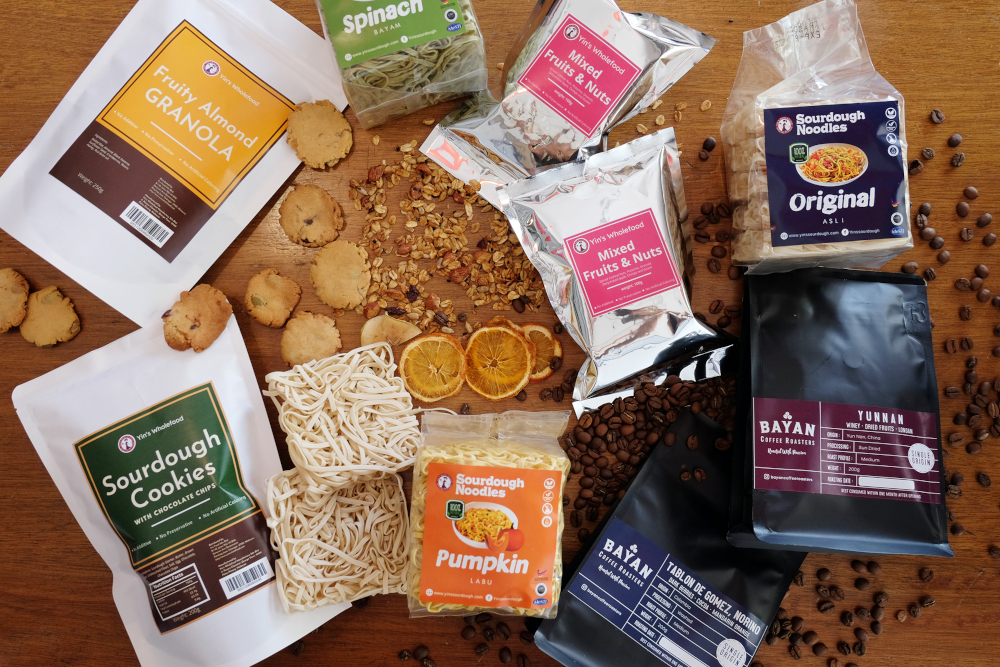 These are some of the products on sale, such as Mixed Fruits & Nuts, Sourdough Noodles, Grandola, Coffee Beans and Sourdough cookies. — Picture by Steven Ooi KE

This was the beginning of Yin’s Mart where they introduced grocery items such as bread spreads, jams, granola, sourdough cookies and roasted coffee beans.

This year, they introduced Chinese New Year hampers and packages so customers can order and send to their relatives and family members.

“We anticipated that MCO might happen again so we imported Chinese New Year packaging so people could order for their relatives since they couldn’t visit and we delivered to the whole of West Malaysia,” she said.

The festive season hampers came in various sizes and sets that included their specialty jams, tea, coffee beans, cookies and the sourdough noodles.

Yin’s Bakery has also produced their own whole fruit jams such as mango passion and orange papaya and now they have expanded to produce strawberry jam, almond spread, peanut spread and coconut jam (kaya). 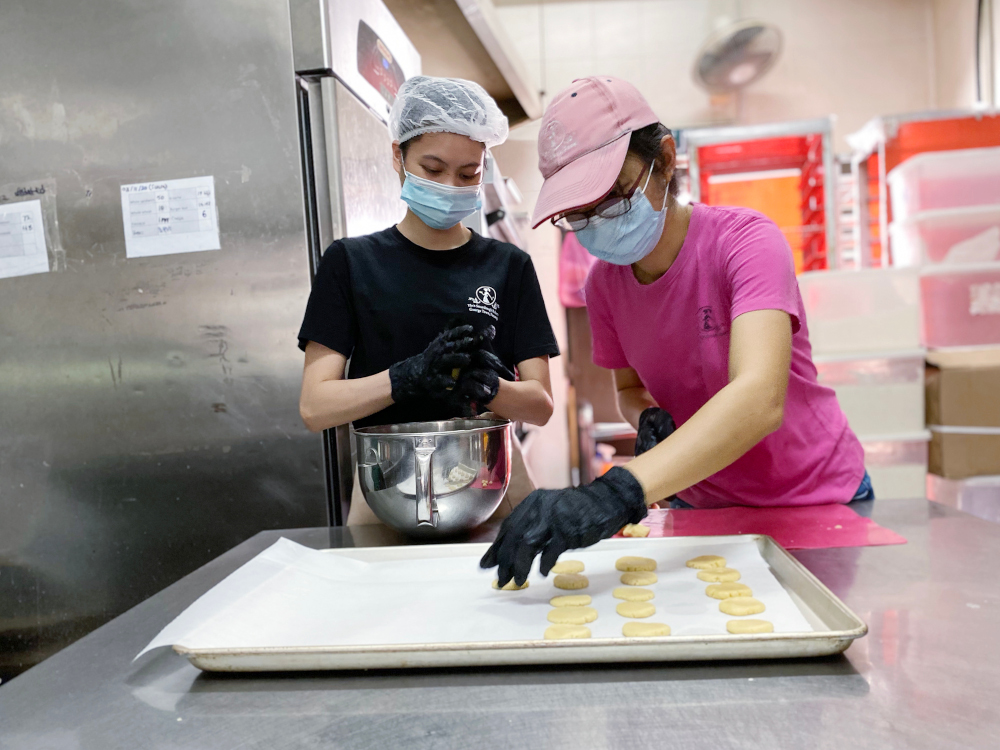 Yin preparing the cookies in their kitchen. — Picture by Steven Ooi KE

“We also introduced more sourdough cookies… previously we only made the giant cookies that are sold at our bakery but now we are making smaller ones and selling these in packs,” she said.

Chan said they have to introduce more products to get more retail sales so they can cover the cost of running the whole business.

“These products did help us to get through MCO 2.0 as business has dropped and delivery is slow too,” she said. 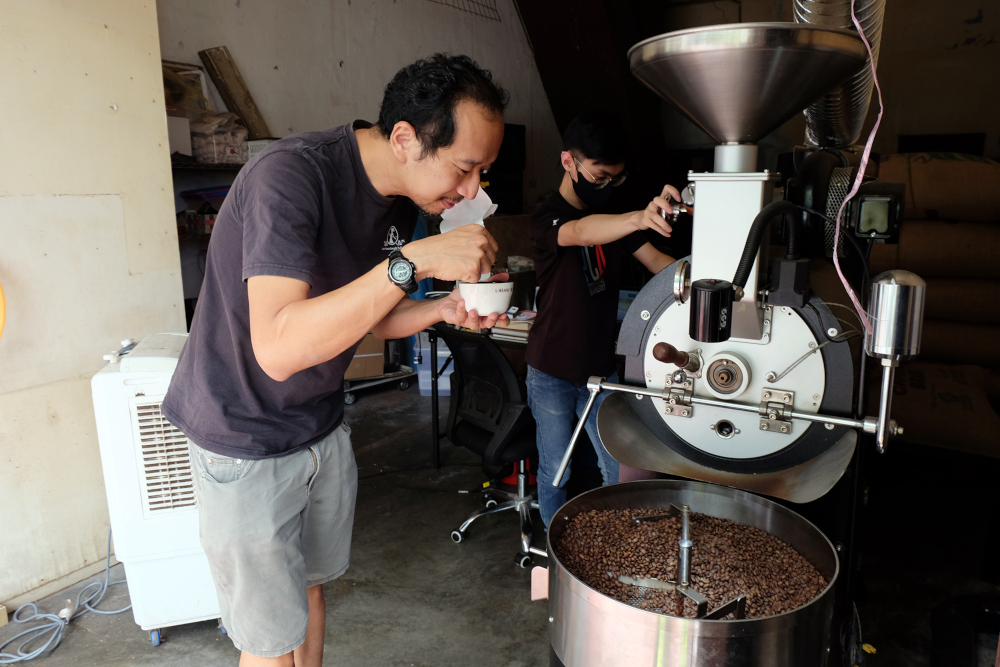 Steven checking on the quality of the coffee bean during the roasting process. — Picture by Steven Ooi KE

She said they have now started roasting their own coffee beans and are selling roasted coffee beans using the honest pricing concept.

“We get our beans directly from the supplier, roast it ourselves and we sell it at an honest price… we don’t mark it up,” she said.

Previously, they were selling two types of coffee bean blends but now they are planning to introduce 10 types.

To reach out to more customers, Yin’s Mart products are available on popular shopping platform Shopee and also on their own website.

They continue to offer cooked food such as their sourdough pizzas and sandwiches and orders can be made on Grab, Foodpanda or through their own app, Yin’s Wholefood.

Customers may order food or any of Yin’s Mart products on Yin’s Wholefood app which is available for download free on the Apple App Store and Google Play Store.