What does it mean for otters to be spotted in urban KL?

A group of otters is spotted in a lake at Taman Tasik Metropolitan Kepong. — Picture by Hari Anggara
Follow us on Instagram, subscribe to our Telegram channel and browser alerts for the latest news you need to know.
By SOO WERN JUN

KUALA LUMPUR, Oct 16 — The appearance of a romp of wild otters in Taman Tasik Metropolitan Kepong seems to have caught the public by pleasant surprise, but left many questioning how they got there in the first place and why?

Speaking to Malay Mail after our report on the creatures, an expert from the Malaysian Nature Society (MNS) explained that it would be far more worrying if otters were absent — as the species is an indicator of healthy wetlands and a functioning ecosystem.

Woo Chee Yoong, a MNS research assistant focusing on otters, said the disappearance of an otter population from an area it once populated is a sign that a water body is no longer “healthy”, signalling a disrupted ecosystem.

“Otters are very intolerant to dirty or polluted water. For example, the Greater Ulu Muda Forest Complex supplies water to Perlis, Kedah and Penang. There, otters are found.

“As compared to Sasaran Sungai Buloh in Kuala Selangor, back then, people sighted 30 otters, but now, we can hardly see any because there are some water issues there. We only saw one last year,” Woo said in a recent interview at the MNS headquarters.

Citing the Sasaran Sungai Buloh situation, Woo said otters are very smart mammals, and if they sense that the water is no longer healthy, and with fish resources decreasing, they will move on to other areas.

A wildlife officer, who is also a wetland expert, Ng Wai Pak, explained that as a top predator mammal in a wetland ecosystem, otters play the most important link between the wetlands and humans, as they signal the condition of their surroundings.

“If you take out one member from the ecosystem, the ecosystem will reshuffle and we don’t know what will happen next.

“Similarly, with the tigers, they are the top predator on tropical land. If there are no more tigers, wild boars will flourish. Wild boars are efficient at consuming young saplings, and when this happens, there will be no continuation in a tropical ecosystem,” he said. 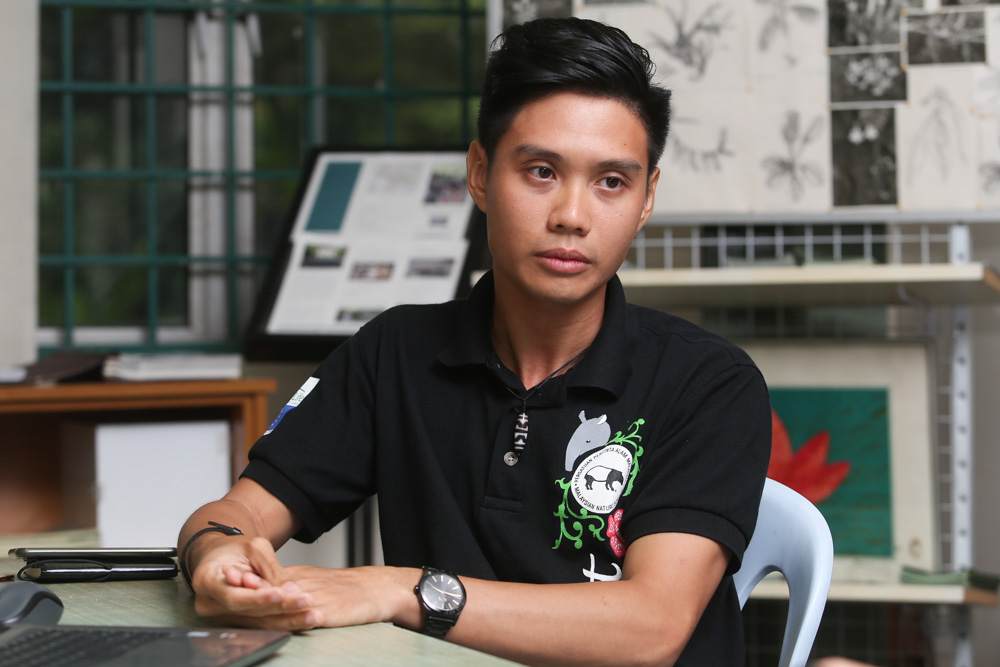 Could the Kepong otters just be passing by?

Last month, Malay Mail reported that smooth-coated otters could be spotted at the 222-acre public park popular with the residents of Selayang and Batu Caves, usually hunting, frolicking, or just basking in the sun.

However, Woo and Ng are both stumped as to the origins of the otters. Due to insufficient data, they are unable to determine whether the otters were displaced.

“It is very hard to track otters, because they are very sensitive toward humans. Once they sense human presence, and when you are too close to them, they will dive into the water and disappear,” Woo said, relating MNS’ experience of tracking otters at Kuala Selangor Nature Park.

“They could have come from a nearby water body. In this case, likely the Bukit Lagong Forest Reserve [in the vicinity]. But we don’t have strong evidence to support that, it is just a possibility.”

He, however, said these sightings are no surprise, as the smooth-coated otters, or their scientific name Lutrogale perspicillata, are very adaptable to urban areas.

“I keep in contact with counterparts in Singapore. They too found that smooth-coated otters are very adaptable in urban areas located in Singapore,” said Woo, referring to the animals that have since become unofficial mascots and proof of the republic’s nature conservation efforts.

As more sightings in other parts of Kuala Lumpur are being reported by the public, Woo said the sightings are no surprise at all as all the water bodies in the vicinity link back to the Klang River.

“We recently found otters in the Brickfields area. They have a big home range and can travel quite far,” he said, acknowledging that otters were once sighted in the Klang River as well.

Much of MNS’ knowledge on otters comes from operating the Kuala Selangor park for over 30 years, where three of the four otter species in Malaysia are kept.

Meanwhile, zoologist Chan Yik Khan said without historic data, it is hard to tell what led to the otters making the Kepong park their home now.

According to Chan, if there are rivers in the vicinity, then developments over the last decade could have shrunk the habitat available for these otters.

“They may have somehow relocated themselves to the lake. The lake is an ideal habitat albeit considered as ‘unnatural’ since its man-made, but the abundance of food is definitely an attraction to stay,” he said, referring to the fish possibly released by the public.

“These are wild animals, and wild animals always prefer the wild, but when such an option is no longer available, they have to settle within urban environments.

“Some species of animals adapt well, but many don’t, and thus perish under urbanisation pressure. They are likely displaced, and have found refuge in the lake. But their origin is hard to confirm,” Chan told Malay Mail.

When asked if the otters can be traced back to their original habitat, Chan said while it is possible, it takes time and is hard to determine with absolute certainty.

“Anyone can do that. But it just raises the possibility, not the absolute certainty, that they came from a certain place,” he added.

Don’t even think of taking otters as pets

Woo, however, cautioned that the focus should not be on tracing the origins of the Kepong otters, but their conservation — which is by protecting their habitat.

“This is how otters are linked to the wetlands. When we protect the otters’ habitat, in return, we will be protecting them too.

“By protecting their habitat, you are helping to fight climate change,” he said, lamenting that wetlands that can absorb carbon dioxide have been cleared for development in recent years, contributing to climate change.

Selayang MP William Leong has since told Malay Mail that he would endeavour to protect the semiaquatic animals, while Kepong MP Lim Lip Eng said Kuala Lumpur Mayor Datuk Nor Hisham Ahmad Dahlan has agreed to form a special team on the matter.

Chan too agreed that the otters should be left undisturbed, and suggested that Malaysians take after Singapore where otter sightings have sparked interest in citizen scientists.

“They have even set up a Facebook group to assist monitoring of the otters and to educate the public.

“They even named the otters, that’s how involved they have gotten,” he said.

Chan said this has encouraged awareness of habitat loss and the need for conservation work and understanding animal behaviour.

Woo also reminded the public that otters are wild animals, and should not be perceived as tame enough to be kept as pets.

“People still view that otters can be kept as pets, but they belong in the wild. Those which are kept as pets, most have their canine teeth removed so that they don’t bite humans,” he said.

When the otters no longer have their canine teeth, they cannot chew on fish. As owners then substitute their diet with dog or cat kibbles, research shows that this causes liver and kidney problems, among the otters.

“This is cruelty towards the animal and that is why we want to educate the public against keeping otters as pets,” he said.

Based on photographs featured in recent news reports, Ng said, the otters at Taman Tasik Metropolitan Kepong look healthy, not malnourished, and their behaviour does not suggest they are tame.

“They look very happy and they should be left that way. We also strongly discourage feeding them as this will cause them to be overfed and dependent on humans for food.

“When wild animals become dependent on humans for food, they become aggressive when they are not given food as expected,” said Ng.