‘Big fishes’ nabbed, charged in Pakatan’s first-year rule: Who else besides Najib, Rosmah?

KUALA LUMPUR, May 14 — It has been an eventful week: Pakatan Harapan (PH) marking its first year in power and its political foe Umno celebrating its 73rd anniversary on the same day as the Sandakan by-election.

The Umno-led Barisan Nasional (BN) coalition is perhaps known best in recent times for the massive 1Malaysia Development Berhad (1MDB) financial scandal while it was in power, with investigators and prosecutors perceived to be seemingly fettered or hampered in taking full action then.

In contrast, the PH coalition's administration is well-known for its aggressive drive against corruption that culminated in the National Anti-Corruption Plan 2019-2023, as well as its swift, decisive crackdown on the alleged perpetrators of misdeeds during the BN-era.

The first “big fish” once thought to be untouchable and to be hauled to the courts for alleged crimes is former prime minister Datuk Seri Najib Razak, who quit as BN chairman and Umno president on May 12, 2018 ― a day after Umno's first birthday celebration as an Opposition party in a sombre event.

Here, Malay Mail gives you a quick recap of a selected list of the other “big fishes” facing charges in court, which is predominantly made up of leaders linked to or with positions in Umno, including Tan Sri Isa Samad who quit the party last year to contest as an independent against Datuk Seri Anwar Ibrahim in the Port Dickson by-election.

Low Taek Jho or Jho Low, who is alleged to be a key player of the 1MDB scandal, has not actually been charged in local courts as he is not in the country. Charges have however been filed here against Low who remains in hiding, so he gets a special mention here.

Getting charged in court is actually quite an expensive affair, as one would usually have to post bail with guarantors to avoid being put in lock-up while waiting for the case to go on trial.

Bail is meant to make sure the accused shows up in court for proceedings including trial, with the bail amount fixed at the court’s discretion depending on various factors.

In the case of Najib whose salary was revealed in court recently, his lawyer had previously told Malay Mail that his second bail involving RM3.5 million was paid in multiple installments within a one-week deadline via crowdfunding, loans from friends and Najib’s personal Affin Bank account that “receives his salaries and pension from his years of service in government”.

Here is a quick summary of the total amount of bail posted so far by a select list of those charged, with the courts sometimes allowing bail posted in previous cases to be extended to cover new cases: 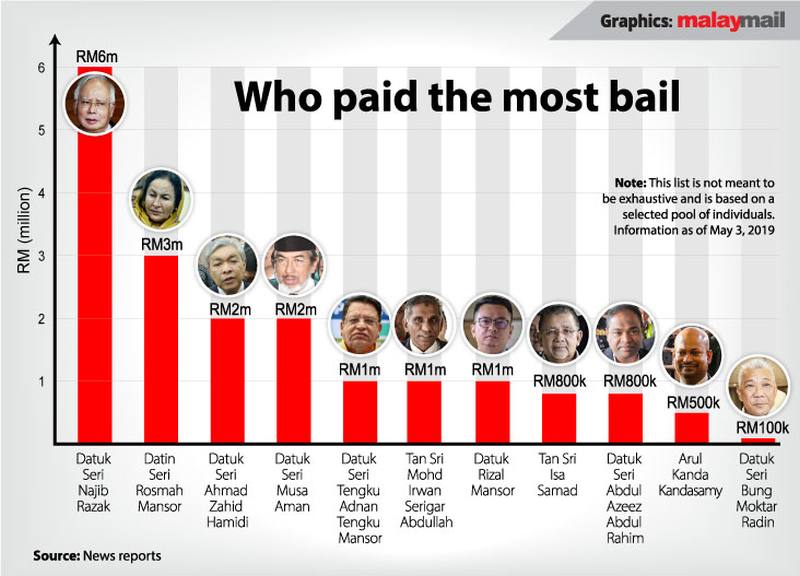 Najib was the first to be charged on July 4, 2018, just a few days short of PH's first two months as the federal government.

Here are the dates from July 2018 to early May 2019 where the “big fishes” were charged, all at the Kuala Lumpur court complex: 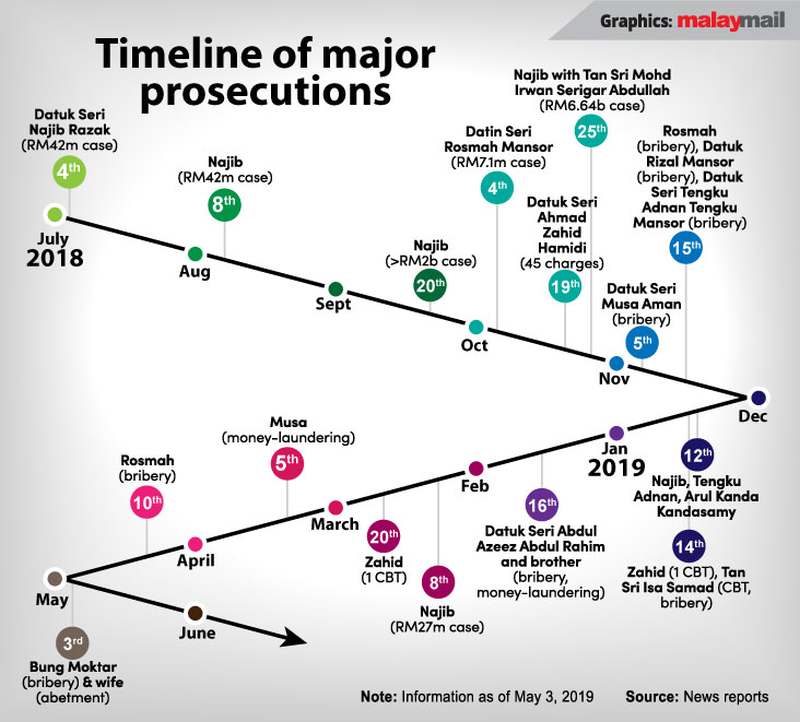 It takes time for these cases to go on trial, as there would be preliminary processes such as for lawyers from both sides to exchange documents, or to finalise matters such as whether the case would be heard in the Sessions Court or the High Court.

For example, Najib's wife Datin Seri Rosmah Mansor's cases have yet to go on trial or to have trial dates fixed. It is in the early stages where the courts will decide matters such as whether several cases would be heard together, as well as whether she has to declare her assets before trial.

Based on news reports, these are the trial dates that have already been fixed so far, including for two individuals who will be put on joint trial with Najib: 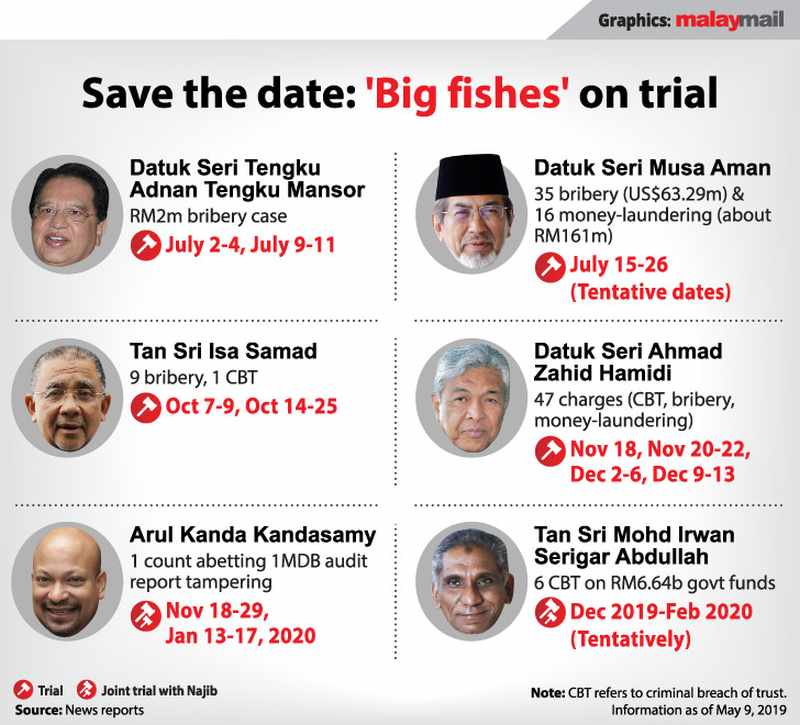 Najib himself gets his own calendar here, where trial dates for four of his cases have already been scheduled since April this year up to tentatively February next year. No trial dates have been fixed yet for the fifth case.

The actual trial dates for two of the cases are set to be finalised on May 14 (Tuesday), including for the additional dates of Najib's ongoing trial involving RM42 million of RM42 million of SRC International Sdn Bhd's funds. 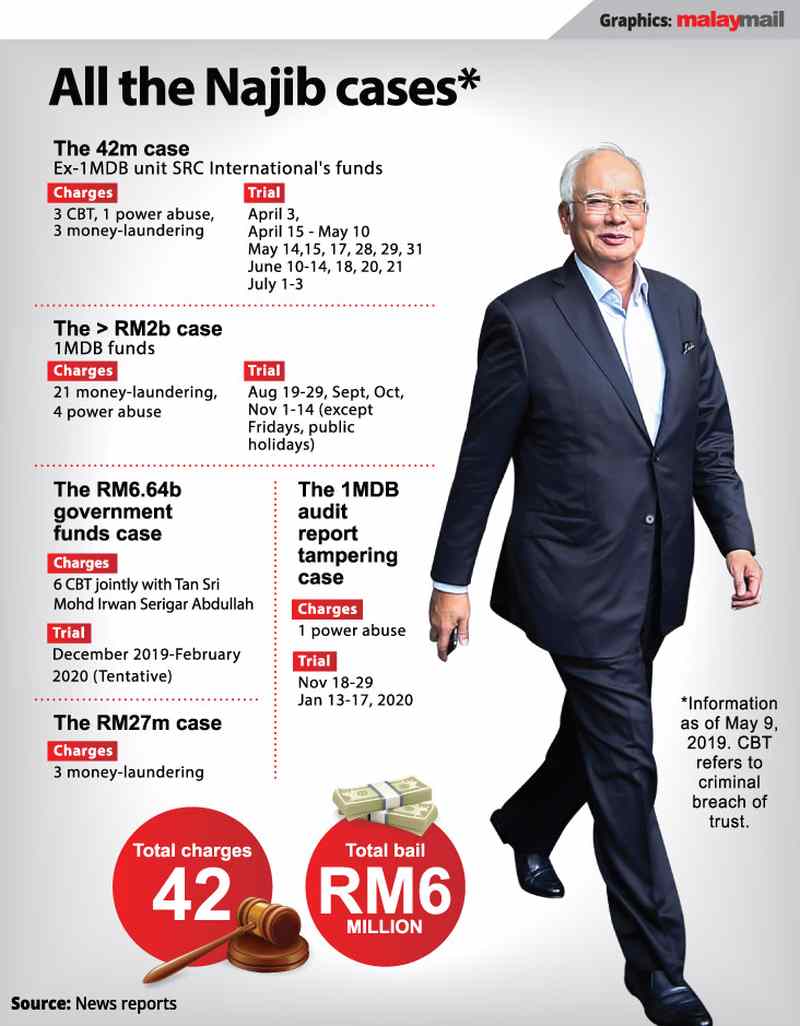