After travelling 236km, Indonesian man goes viral for crying when woman he met on Mobile Legends rejected him (VIDEO)

Young man’s love gone to waste. ― Picture via Instagram/fakta.indo
Follow us on Instagram, subscribe to our Telegram channel and browser alerts for the latest news you need to know.
By SIVAA TANGAI RAJU

KUALA LUMPUR, Aug 13 ― A video of an Indonesian man sobbing in front of a shop in Kota Padang Panjang, West Sumatra, Indonesia, has gone viral on social media.

He was weeping in the video posted by fakta.indo on its Instagram account after his love was rejected by the woman he loved and hoped for.

He met the woman while playing the war game Mobile Legends, and love sparked between the two Indonesian youngsters.

However, his long motorbike ride all the way from Pekanbaru to Padang Panjang (236 kilometres to be exact) to meet his ideal girlfriend ended in heartbreak as his love was apparently rejected by the woman.

Mobile Legends is a mobile multiplayer online battle arena, developed and released by Moonton, a subsidiary of ByteDance, has grown in popularity in Southeast Asia, and it was one of the titles picked for the inaugural medal event E-sports competition at the 2019 Southeast Asian Games in Philippines.

The man's plight drew the attention of a large number of individuals.

“Did she call you a bad guy? Has he turned down your love?” she asked.

He replied “Yes”, while nodding his head.

It is obvious that humanity did not fail as many people were seen consoling and supporting the devastated man, even during this ongoing worldwide Covid-19 pandemic. 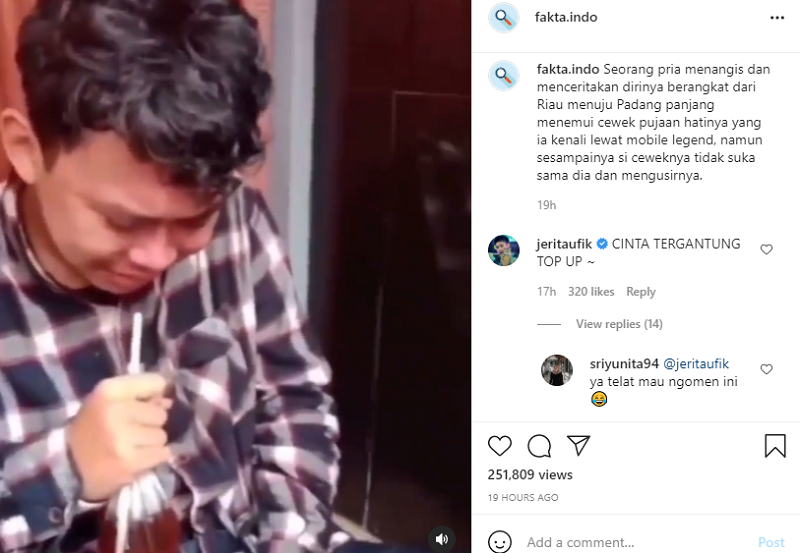 The people around him offered him a drink and told him to calm himself down. ― Picture via Instagram/fakta.indo

Many Instagram users reacted in the clip's comment section with their opinions on love in today’s era.

“Love depends on the amount of prepaid top up,” one user said.

“Why didn’t you try making a video call before meeting her?” another comment read.