Even families took part in the 15-minute patriotic sing-along at Irama Wangsa Condominium. — Picture courtesy of Syed Khalid Alwee Aljuned
Follow us on Instagram, subscribe to our Telegram channel and browser alerts for the latest news you need to know.
By ARIF ZIKRI

KUALA LUMPUR, March 26 — Residents at a condominium in Wangsa Maju came together in a patriotic singalong from their balconies last night with news that the movement control order (MCO) would be extended to April 14.

After a rallying call was made by the residents committee via the residents’ Whatsapp group, folks at Irama Wangsa merrily joined in the 15-minute patriotic sing-along which included the national anthem in Negaraku and Inilah Barisan Kita. 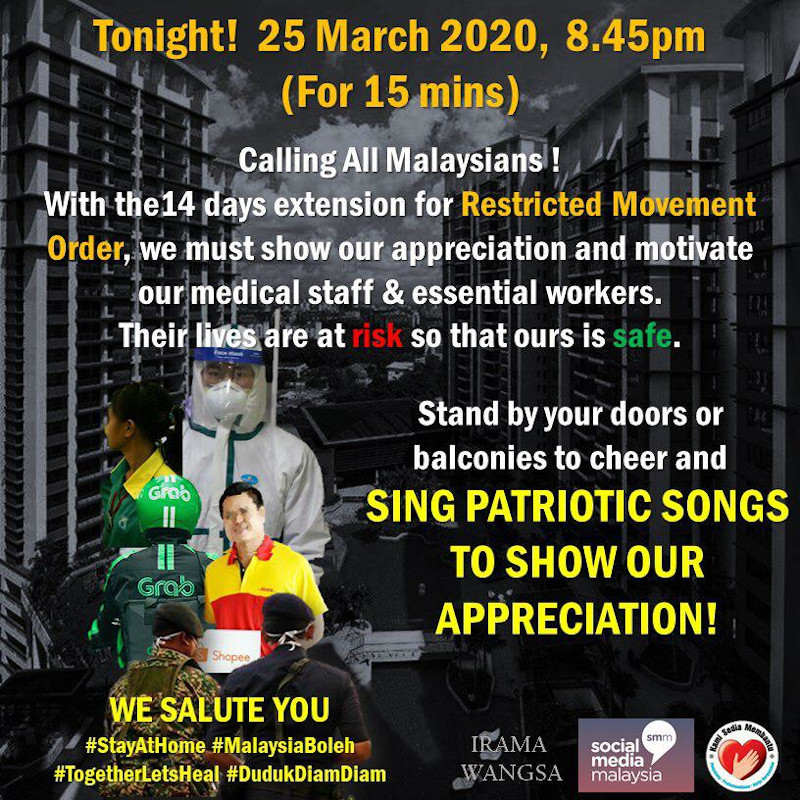 Residents were alerted by the committee about the patriotic sing-along. — Picture courtesy of Syed Khalid Alwee Aljuned

According to one of the residents, Syed Khalid Alwee Aljuned, the sing along were due to the extension of the MCO and also as a way to boost up the morale of the people and front-liners.

“After the announcement for the RMO was to be extended another 14 days, many felt restless and a bit worried.”

“There are medical front liners in the building and we decided to do this to lift up their morale as well as those who stayed in their houses. Everyone needs a morale boost from the uncertainty.”

Syed who has been a resident at Irama Wangsa for a year-and-a-half now noticed the environment at the condominium had turned sombre with all the facilities there closed and neighbours restricting their interactions.

To him, the sing along is a great way to lift up the spirits of the people as they are stuck inside their homes thinking that they are alone facing this new unprecedented environment.

“This event was not only about wanting to show appreciation and lifting the morale of the front liners.”

“It was actually more for the residents too, that no one is alone facing these testing times that we are together as one, the patriotic songs reminded us all that we are all Malaysians and what we are doing now, is something for the country, not only for ourselves.”

The idea of throwing a singalong was brought forth by Wan Salmizan, a member of the resident’s committee and the management of Irama Wangsa had also been notified by the committee of the singalong.

This is not the first time a singalong has taken place in Irama Wangsa as they did it last week in the early days of the MCO.

“Around 80 per cent of the residents joined in this time, compared to possibly 50-60 per cent the last time. Around 250 units, I would say, took part,” said Syed.