Pretty in pink... and white

That’s my first thought whenever I encounter the sala fruit (or salak in Malay) at wet markets and supermarkets. Its scale-like and prickly exterior gives rise to its other moniker: snake skin fruit. But appearances can be deceiving.

Properly known as Salacca zalacca, the sala fruit is, in fact, a species of palm tree native to Indonesia though it’s cultivated in many South-east Asian countries such as Malaysia and Thailand. 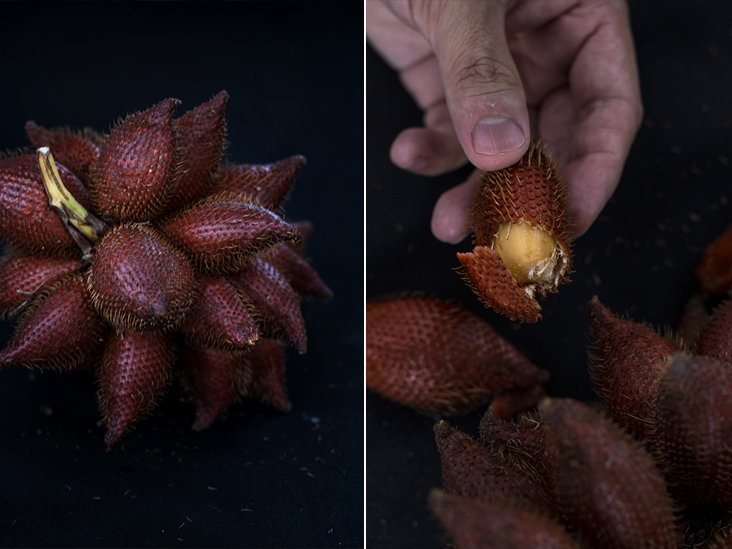 The scale-like skin of the sala fruit is why it’s also known as snake skin fruit (left). Peel the fruit to reveal the golden-hued flesh inside (right)

The latter is where the fruit has seen a resurgence of late, thanks to a popular Thai television series revolving around university life called SOTUS: The Series.

In SOTUS, one of the lead characters — a hot-tempered head hazer — is discovered by one of his juniors to have a secret affinity for nom yen, a sweet iced pink milk. (Nom means milk in Thai; yen is cold or iced in this instance). Hardly suits his fierce image, one would imagine. Appearances can be deceiving.

It turns out the senior hazer is a big softie, convinced to take on the thankless task out of a sense of duty and tradition. His love of the pretty pink milk is the audience’s introduction to this gentler side of his. But what on earth has all this got to do with the sala fruit, you may very well ask?

As it turns out, the pink milk is a blend of milk and a ruby red syrup... made from the sala fruit. The cactus-like sala, just like the head hazer, has a softer side. If you pry apart its scaly skin, you will be rewarded with its juicy flesh hidden within.

Just like many a human being. Everyone a unique and special snowflake. We just have to get closer, look past the exterior, and look within. In Thailand, nom yen is usually sold by street vendors from their stalls or motorcycle carts. The drink is especially popular with Thai children who don’t drink coffee as an iced drink is the default way of warding off the hot and humid weather.
(Older teenagers and adults prefer cha yen which is Thai iced milk tea; both drinks are very sweet.)

Pay attention to how these street vendors make nom yen and you will observe that everyone uses the same brand of sala syrup — Hale’s Blue Boy Brand. The ubiquity of this drink reminds me of another iconic drink, the three-layer tea of Sarawak.

Also known as “Teh C Peng Special”, the beverage gets its name from its three distinct layers of tea, evaporated milk and gula Melaka syrup.

Which made me wonder, why have pink milk when you can have milk that’s both pink and white at the same time? Looking almost like a liquid form of some Nyonya kuih lapis, no one would have guessed that this pretty drink owes its two tone hue to a rather ugly fruit. 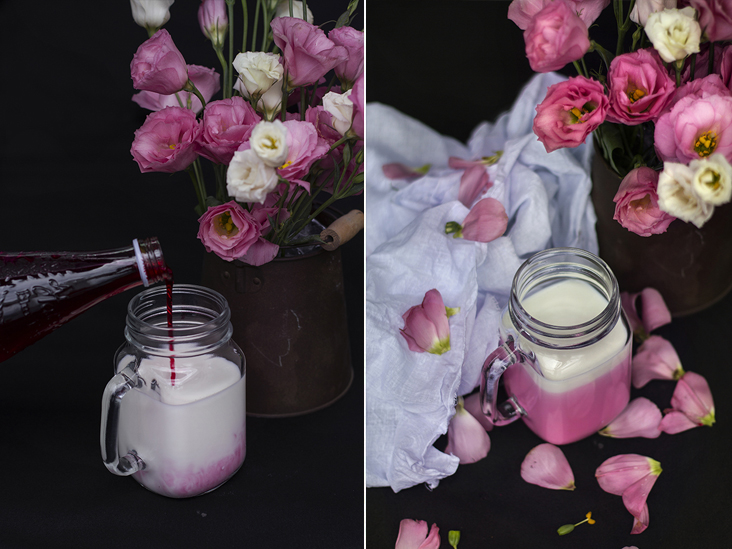 Here I’ve used fresh milk (nom sot in Thai) as it’s less sweet and has a creamier mouthfeel, which balances the inherent sweetness of the sala syrup. If you prefer a more authentic Thai flavour (and don’t mind cloyingly sweet beverages), you can replace the fresh milk with the same amount of water mixed with four tablespoons of condensed milk (nom tamada) or evaporated milk (nom kom).

Using fresh milk means the finished beverage will merely have a hint of sweetness, albeit with a strong fragrance of rose petals.

Having said that, it may still be too sweet for some tastebuds, so adding some ice could help to dilute the drink. It may interfere with the carefully composed twin layers of white and pink so be gentle when adding it.

Pour the fresh milk into two separate 100ml glass mugs equally. Add one tablespoon of the sala syrup into the milk without stirring. The lower half of the milk will mix with the denser syrup which falls to the bottom of the mug, creating a layer that is pastel pink in colour.

Top with some crushed ice if desired and serve immediately while it’s chilled.