SEPTEMBER 9 ― Opinion surveys over the past two weeks show that President Joe Biden’s popularity has dropped. An NBC poll saw his approval level fall from 53 per cent in April to 49 per cent in mid-August.

Several polls revealed similar results which, taken together, raise questions about Biden’s performance during the first year of his presidency.

At the same time, these polls also gave Biden a disapproval level which was slightly less than his approval mark.

This is significant in many ways, especially as analysts measure the public’s view of his performance when compared with that of his predecessor, Donald Trump.

Indeed, over the course of his four-year tenure Trump never enjoyed net approval among Americans.

Why the dip in Biden’s poll numbers? The surveys reveal predictable reasons: unhappiness over matters associated with the US withdrawal from Afghanistan; nagging pandemic issues, including rising case numbers and tussles with state and local officials, especially governors in the large states of Texas and Florida; and concerns about the economy, especially rising inflation.

The issue most responsible for Biden’s overall decline is the pandemic. Indeed, over a four-month period the president’s Covid-19 approval number fell 16 points, from 69 per cent to 53 per cent.

The immediate concern shared by Biden and fellow Democrats is whether his poll numbers will adversely affect the chances of congressional Democrats in the 2022 mid-term election.

A more distant, but very real, concern is whether Democrats will be able to win the presidency in 2024.

Since the beginning of the twentieth century, the party of the president has struggled in mid-term elections, losing seats in the House of Representatives 26 out of 30 times, and in the Senate 20 out of 30 times.

When the president’s party does manage to pick up seats in these elections it is, invariably, due to highly unusual events or conditions in the country.

In 1934, the party of Franklin Roosevelt (FDR) gained seats in the Senate and House — but this was the first mid-term round during the Great Depression, and most Americans placed extraordinary faith in FDR’s Democrats to engineer an economic recovery.

In 1998, the next time such a thing happened in House elections, polls showed that voters were unhappy with Republicans’ efforts to impeach Bill Clinton, and as a result rallied behind Clinton the only way they could, by voting for his party in the mid-terms.

Are there unusual conditions now? Yes. First there are once-in-a-century issues such as mask-wearing and compulsory vaccinations associated with the long-lasting pandemic.

And there is the unusually deep partisan split between “blue” and “red” voters owing to the partisan feud beginning with Trump’s presidency, continuing with his 2020 re-election defeat, and dragging on because of his refusal to accept the voters’ decision to oust him.

These have had a lasting impression on voters, one consequence of which is that the percentage of Americans identifying themselves as Republicans has fallen slightly.

Since 2016, the gap favouring Democrats over Republicans has increased by only a few percentage points, which in itself does not suggest political upheaval of any sort.

But what has changed dramatically is the percentage of voters identifying as “independent.”

This number, pre-Trump, averaged about 35 per cent, but now averages in the mid-forties. Could this result in a mid-term surprise, one benefiting Democrats?

This depends on the performance of Biden and fellow Democrats, as well as the way voters assess the behaviour of Trump and his loyalists over the next year.

Arguably, Biden’s performance during his first eight months has been fairly good. He has taken the lead in getting businesses and schools to promote mask-wearing — in spite of loud, often senseless opposition by governors and other leaders, especially in “red” states where Trump remains popular.

Indeed, the resistance Biden has faced on vaccines and masks is almost entirely partisan.

More than 170 million American adults — 51.5 per cent ― are fully vaccinated, but the vaccination rate among Republicans is about ten per cent lower than among Democrats. 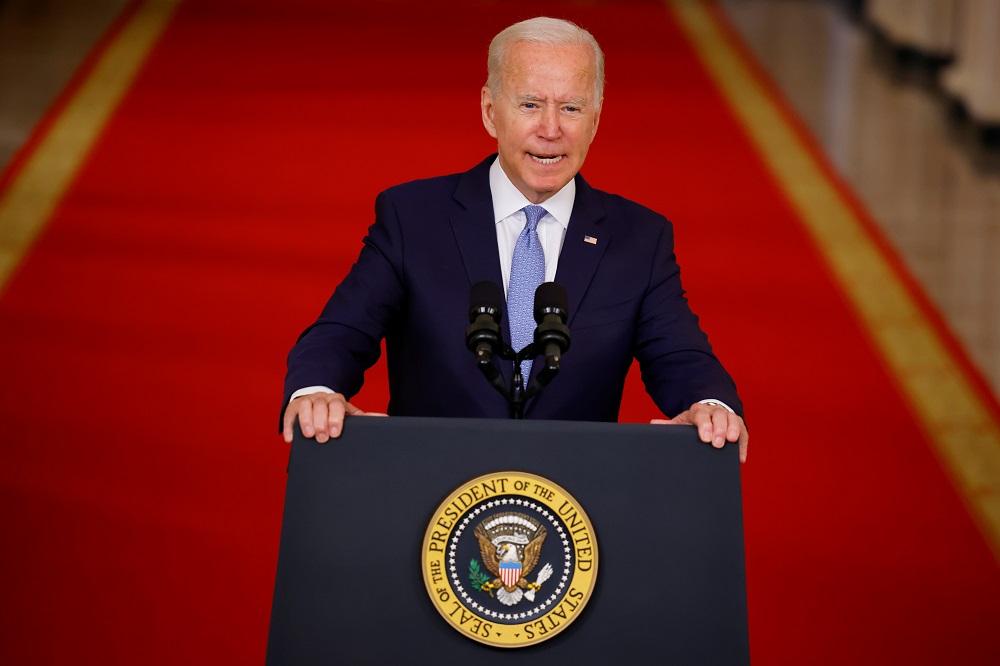 US President Joe Biden delivers remarks on Afghanistan during a speech in the State Dining Room at the White House in Washington August 31, 2021. — Reuters pic

iden’s progress on improving the economy has been solid. Along with fellow Democrats he managed to push through Congress a much-needed, US$1.9 trillion (RM7.8 trillion) economic stimulus package, which included direct payments to most Americans.

This alone went a long way in revitalising an economy ravaged by Covid-19. One consequence of the stimulus is the current unemployment rate of 5.4 per cent, the lowest it has been in more than 18 months. And inflation, while a very real threat, remains under control.

An infrastructure bill was promised by Trump, but never materialised or was even seriously promoted during the Republican’s four-year term. And it now appears that Democrats will have enough votes in Congress to pass both Bills by October.

Broadly viewed, it is unclear whether this month’s dip in Biden’s approval level reflects temporary dissatisfaction with his leadership or something more serious and long-lasting.

As for his 2024 re-election prospects, Gallup polls taken over several decades teach us that average approval numbers in a president’s first term do not always foretell a president’s chances.

For instance, Barack Obama’s first-term approval average was just over 49 per cent, yet he won re-election by a handy margin. The same was true of Ronald Reagan (50.3 per cent). On the other hand, George HW Bush averaged over 60 per cent, but lost by a significant margin in his 1992 re-election bid.

Still, as the last five years have shown, politics often surprises us all.

* The writer is a Professor at HELP University.