The Four Horsemen of Malay-Only Politics: How deep is your race love?

Thursday, 03 Mar 2022 8:08 AM MYT By Praba Ganesan
Follow us on Instagram, subscribe to our Telegram channel and browser alerts for the latest news you need to know.
By Praba Ganesan

MARCH 3 — It was easier to vote for a far-right Malay exclusive party before 2018.

Like Coke or Pepsi, it was either Umno or PAS — in that order.

Malays had to only decide if they were race driven, and if YES, choose between the two. Red or green pill. (The NOs end up with Pakatan Harapan, Warisan, Muda or are still looking for a better option.)

Not anymore. The surge of far-right Malay parties crowd the stage and confuse race-based voters.

A disinclination to layered thinking which leans people to oversimplified race choices, therefore asking the very people to make fine distinctions of the four present contenders threatens their mental well-being.

This is partly about Johor as a test case, but more so about how typical race-biased Malays must process Umno, PAS, Bersatu and Pejuang in the impending general election.

This column proposes several filters to be adopted by these wary voters.

Mindful that PAS and Bersatu bundle their votes together under Perikatan Nasional but their fundamental separation differentiates the votes they collect even if aggregated.

So much so, after the election either party can claim who has brought in more of the Malay heartland vote. In Melaka last November, it was assumed Bersatu did the heavy lifting. 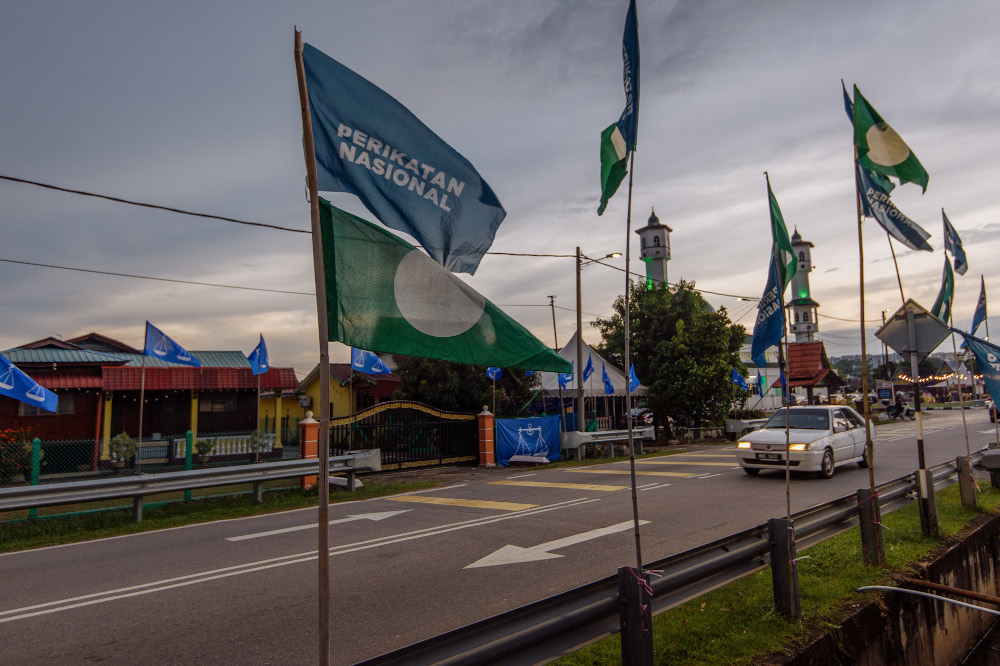 All four parties are convinced the one among them to finish with the most race-based votes from Malays will have their man sworn in as mentri besar a day after March 12. Expect the race rhetoric to crescendo days before polling day. That should come with a health warning.

This is the most frivolous filter. And also the hardest.

Ask the parties, if they love Malays in turns, it would begin with 100 per cent and end with however high they can count with their hands and toes — a kajillion million per cent.

PAS slips on account it prioritises religion over race, although in these mad days, it is hard to tell anymore. Their president Hadi Awang has been so pliant with Bersatu inside PN there are those who claim PAS merely follows Bersatu’s leadership.

Umno has the romantic edge in Johor as the hometown party. Bersatu has governed the state after 2018, unsuccessfully. So too has Umno ruled and failed.

But on account of longevity, Umno might be the choice based on years in existence rather than actual proof of love. He loved you long time.

Top of the ticket has always been the superior consideration in our still developing democracy. Three of them have a current or ex-PM at the top of the ticket.

To belabour the point, the menteri besar pick for Johor is inconsequential when compared to whether Bersatu is under Muhyiddin Yassin, Umno under the tandem of Zahid Hamidi and PM Ismail Sabri Yaakob and belated Pejuang guided by Mahathir Mohamad.

If the voter trusts Muhyiddin, or Ismail Sabri or Mahathir, then they believe their MB nominee would reflect the respective leader they choose to back.

In this regard, in descending order, it’s Mahathir, Muhyiddin, Ismail Sabri and then Hadi.

Ismail Sabri struggles in that he is not party president, just a vice-president, and Zahid looms large over him. Those who vote Umno are unsure if the support is for the almost caretaker PM or PM in waiting/president.

Here’s where it gets unstuck.

Muhyiddin and Mahathir are unmatched masters of their respective parties, but their lead weight also drags down their parties’ appeal.

There are numerous ungenerous memes about Bersatu deputy president, Ahmad Faizal Azumu. Pub quiz experts would struggle to name three more names in the main Bersatu committee, they are that much anonymous. After all, it is a revolving door of middling ex-Umno leaders passing back and forth among these parties.

If Bersatu gets ridiculed for its unspectacular cast members, it’s diabolical in Pejuang.

Party president Mukhriz Mahathir is the moon to his father’s burning sun. All of the firepower is with Mahathir.

While Umno is messed up, there are many recognisable faces associated with the mess. So many have pursued power — even if for personal use — inside the grand old party, that for casual observers Umno has the highest number of leaders, infamous or otherwise.

Big tick on this for Umno.

Burn this whole city down

When it comes to rhetoric, riling the people up, there are computations. It can get to absurd levels and turn volatile.

PAS used to claim those who shy from them risk the fires of hell. They are muted on that these days, but they remind of how far down the rabbit hole some do go.

Pejuang gambles on 42 seats in the least Mahathir-state of the Semenanjung west coast. Mass losses along with deposit forfeiture would stillborn the party. If they want to fire up the community to support them, they would need a central message of the others failing the Malays, laced with toxic vitriol.

Going negative is a natural course inside the world of Malay-first politics.

They are not ALL

While the Four Horsemen of Malay-Only Politics swear by racism as their basic creed, their electoral pathway, their hypothesis relies on the premise that a vast percentage of Malays gravitate their choices purely on race.

Even if things are beginning to change, there is truth in the claim the four share: The largest share of Malay votes is predicated on Malay issues, and the absolute winner of that battle will likely form government.

However, if the votes are spread in small variance among them, not unlike how votes were split in the 2018 general election among Pakatan (with Bersatu), BN and PAS, then all four parties might flounder in terms of seat count.

Umno will probably emerge with the most number of seats, but if the vote fracture among the four parties leads to Pakatan winning slimly in enough constituencies, a political stalemate might materialise.

And then the spectre of Umno and PN to ask Pakatan or worse Pejuang to cooperate becomes real. A race to form a majority in the state assembly. Otherwise, Johor might end up exactly where it was when the year started, uncertain.

Adopting or factoring the filters above may aid Malay-first voters to pick their party without remorse but the eventual outcome might only frustrate them.

That’s the summary of too many far-right Malay-exclusive parties. What was expected to be an oasis away from liberal and progressive politics, is now an uncertain patch because of the numerous players involved.

Four parties in the fray is untenable, and unsatisfying for the race-first Malay voters.