Simpson: How I maintain a balanced family life as a top-five player in the world

Tuesday, 04 Aug 2020 6:42 PM MYT By Player's Blog
Follow us on Instagram, subscribe to our Telegram channel and browser alerts for the latest news you need to know.
By Player's Blog

AUGUST 4 — We knew all along that we wanted to have a big family. My wife, Dowd, is the oldest of five children and I am second to the youngest of six. We didn't know exactly how many children we wanted, but we knew we both had great experiences growing up and wanted to create something similar to that in our life together. We have five children now, ages nine, seven, six, four and 18 months.

Our life is constant, busy and fun. We feel like we fail every day at what we want to be as parents, but we're thankful our kids give us grace and they forgive us when we mess up. We are constantly learning. We ask questions to parents who are five, 10 years ahead of us — what did they do that worked well? And when it comes to teaching our kids or disciplining our kids, I feel like parenting is one of those fluid processes unlike anything else. You learn as you go. You learn from your mistakes. It's simultaneously the most joyful and challenging thing that I've ever done. Some days you feel like you want to have 20 kids and some days you feel like you just want to run into your closet and hide for a little while. But we are having fun. I mean, our kids bring so much joy to us.

Dowd and I truly are partners in this journey. Most of the things I've implemented as a father have come from her and from watching her be a mom. I think communication is so big when it comes to any marriage — any relationship, really — and especially one like ours where we're apart so much. You’ve got to know how to talk to each other. Sometimes I play golf more than I want to because of the schedule that time of the year, but Dowd has been great about it.

In fact, a few years ago she told me when I'm on the road, I should be fully on the road and trust that she's got everything taken care of at home. And then when I'm at home, be fully home. So, if I have an off week, I don't need to be spending two hours a night watching Golf Channel … be fully with the kids, present minded, that kind of thing. Obviously, I miss them when I’m on the road and think about them a lot, but Dowd just said, "Hey, listen, if you're going to be gone from us, why don't you make it count? Go work hard and have a great week of golf, then come home and deal with us." So that really changed my mindset and it's really helping. 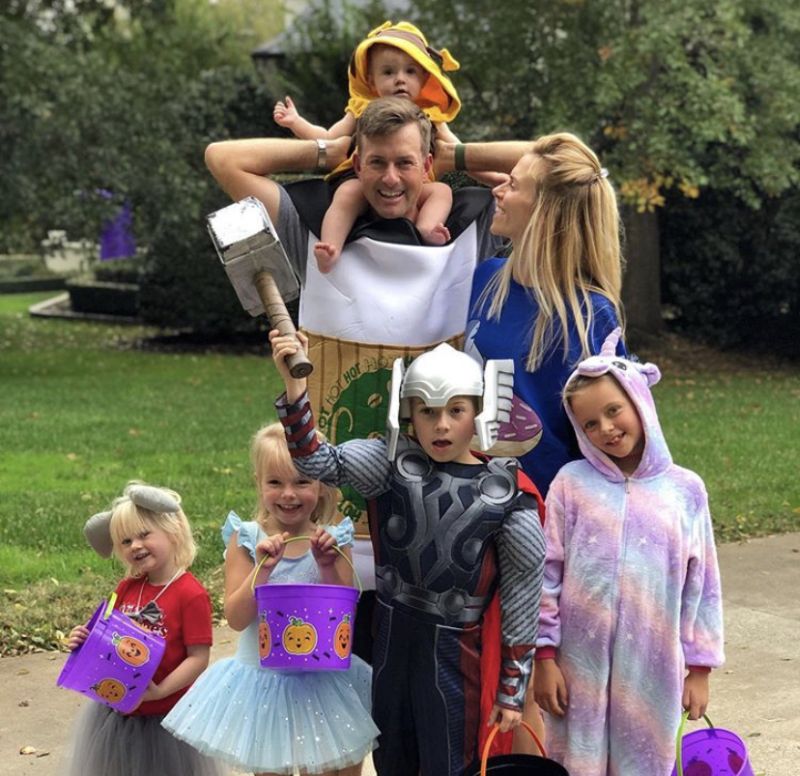 Simpson is pictured with his family. — Picture courtesy of Webb Simpson

When the kids are in school, they don’t travel a lot — maybe six or seven tournaments at the most, sometimes just on the weekend. Sometimes Dowd will fly out by herself, maybe one or two weekends a year, to be with me, but it's not that often. We’re fortunate living in Charlotte, North Carolina, though. We have our hometown event, the Wells Fargo Championship, and there are a lot of tournaments that are easy drives for Dowd and the kids – the Masters, the Wyndham Championship and the RBC Heritage, which I won earlier this year. All of those events are special to me. In fact, we named our third child Wyndham after I won Greensboro in 2011. That said, I know a time will come when it’s not as easy for the whole family to travel. We’ve got three in school now and our four-year-old can’t wait to get started. They’ll be doing sports or theater or whatever and there will be conflicts. Plus, it will be harder for me to leave knowing that there are important events or activities going on.

And leaving home is never easy. I remember when Jack was probably six years old and I told him I was going to be gone for eight days to go play in the Open Championship. He started crying in the driveway and then I started crying. I literally kissed everyone, told them I loved them and told Dowd, with tears in my eyes that I’ve got to go. Then I sat there and cried in the back of the car that was taking me to the airport. As the kids have gotten older, the dynamics change a little. They can tell you they don’t want you to go in a very clear way like Jack did that day. But they also understand my job better and how it takes me away from them. When I’m on the road, we stay in touch on FaceTime. I try not to call during dinner or disrupt the bedtime routine because sometimes the kids get a little hyper after talking to me. Our youngest, Eden, she cries immediately when she hears my voice on the phone. But we talk several times a week and we try to talk individually so I can hear about their day. I don’t know if it helps them, but it definitely helps me.

Of course, there are things you miss when you are on the road. The week I won the US Open in 2012, Jack, who is our first-born, took his first steps. I remember Dowd called me and said, "Hey, I know you'd want to know this. I know it's going to be hard, but I want to tell you, James took his first steps today." And it really broke my heart. But once I did it for a while and started travelling, you get used to missing certain things and in a sad kind of way it becomes easier. But I will say during Covid-19, I got to be home for four straight months — maybe for the first time since we got married — and seeing Eden develop and grow was one of the highlights of me being a parent. Seeing that constant day-to-day growth and change makes me honestly feel close to her in a special way.

So, we just came up with a game plan that when I am in route, whether it's on the airplane or in a car driving back home, I pray. I ask God for help to just be patient and lay my desires down for a little while and try to help the family. It's a conscious effort that I have to make and it's a joy. Obviously, I want to come back home. But there's these little nuances and subtleties to that transition when you go from being by yourself for a week to the constant noise and fun and loudness of a big family. And it definitely took time and we had to come up with a game plan of how to make it a better. And I wouldn’t have my life any other way.

* American Webb Simpson is a seven-time PGA Tour winner, including this season’s Waste Management Phoenix Open and RBC Heritage. You can watch the current FedExCup No. 2 and the PGA Tour on Astro Golf Channel and GOLFTV powered by PGA Tour.