Is there a downside to academic excellence?

JULY 17 — Never ever hire anyone with a Grade Point Average of 4.0 ~ Tom Peters

This issue is not at all new. It’s talked about and lamented at business workshops and conferences each time education is brought up but — lo and behold — the problem will continue for at least another generation (especially in Asia).

Is there a downside to academic excellence? (see Note 1)

For an Asian kid to do well in school, it usually means that s/he has developed a certain habit of mind: memorisation.

Unless all the SRKs and SMKs have undergone a (literally) mind-blowing revolution, how Malaysian teachers educate students today wouldn’t be that different from how they did back when the Form 3 exam was known as SRP.

You can’t write off more than half a century of Malaysian education.

Memorisation, in fact, is an apt symbol for our attitudes towards formal education i.e. it’s “safe” and it’s effective. How can there be a downside?

That’s why millions of Malaysians use the method. Likewise, “scoring well in school” is seen as the non-negotiable trajectory all parents want their kids to be “on.”

If our kids do well in school, it’s good for morale, it promises a bright future — what could possibly be wrong with that?

As anyone who’s ever thought hard about learning knows, memorisation isn’t merely an inferior way to learn — it also prevents us from adopting something better. That’s why I termed it a habit of mind.

It’s like, if you’ve been using a QWERTY keyboard all your life, suddenly being asked to use the DVORAK or COLEMAK format is going to be torture. Or, if you’ve been reading slooooow-ly, line by line, for the past 30 years, attempting to speed-read is going to make your eyes feel like popping out.

Ditto with memorisation. The method forces your mind to react in a particular way on cue. It’s a form of mental behaviourism.

Heard of Pavlov and his dog? Pavlov saw that his dogs would drool each time he brought them food. Then he noticed that his mutts would salivate at the mere sight of him entering the room even without food.

It’s conditioning, and this is what the education system (at least the Malaysian one) does to students.It’s like, each time Form 5-ers see the word “exam” or “learn” or “education”, they go into “how many pages of which topic do I have to upload into my memory before downloading into an exam answer sheet?” mode (see note 2).

So that’s the first downside of academic excellence i.e. it’s (almost) one and the same with excellence in committing vast portions of textbooks to memory. Nothing more.

Academia and the turkey illusion

As with memorisation, so with the “our-kids-must-excel-in-school-end-of-argument” mindset. Precisely because it’s “safe”, brings lots of “fast” benefits (like glowing report cards and status among peers) and intuitively tallies well with future prospects, Asian parents almost never question it.

It’s very unlikely that an Asian parent will do what the parents of world chess champion Magnus Carlsen did i.e. take a whole year off.

Off school. Off classes. A full 12 months just to relax and “enjoy life.”

I’m just guessing here but I think such prolonged time-outs help youths like Carlsen experience a life without the need to achieve, hardly something Asian kids are used to. Our youngsters, in contrast, are drilled from young to perform, succeed, excel — and what better mode to thrive than in one’s studies?

Parents, likewise, are pressured to pressure their kids. What do you think your friends and relatives will say if you announced you wanted to remove your kids after Standard 6 for a year so they can a) learn something they love independently of the system or b) go travelling or c) why do we even need to justify it?

It’s almost as if parents are running away from something and dragging their kids with them. And kids? They usually just follow along.

The downside, obviously (then again, it seems very non-obvious to many people I converse with), is that a young life spent “chasing” academic excellence and being in fear of a poor report card very easily leads to a limited mode of thought and fragile emotional structures.

I don’t know how else to put it. But I’ll try again.

You know how in America the thanksgiving turkey is very well fed weeks before it gets slaughtered? Months before the bird is fed and fed and fed i.e. all the “data” suggests progress and success. Until, of course, Thanksgiving Day arrives.

It’s a similar phenomenon with academia. The “benefits” of education — good scores, parental approval, etc. — may mask a deep problem. What problem? The fact that the student a) has a very incomplete and inadequate set of mental tools to learn and b) has developed an unhealthy association of status with academic marks.

The first problem will rear its ugly head the second the student is required to perform tasks which have zero correlation with academic work (e.g. managing a project). The second problem will hit with a vengeance the moment getting an A in Biology ceases to be mean a damn i.e. any occasion outside school.

In short, not unlike the Thanksgiving turkey, a top student who has unwittingly relied on the tools needed to excel academically may just find himself in a sudden crisis-point. 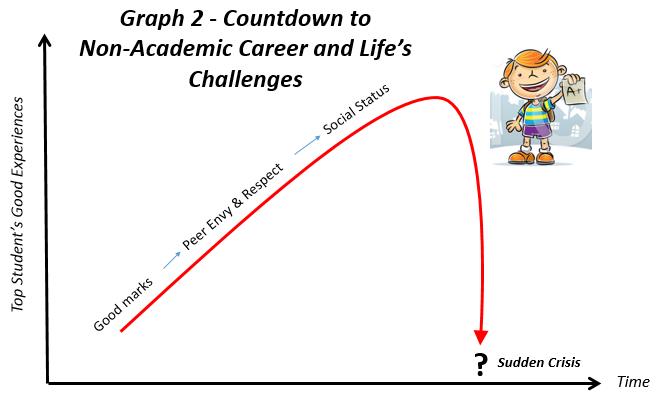 So what am I saying? Everybody should fail all their subjects, skip school and play World of Warcraft all day? Hardly. But that topic is for another day.

For now — especially if you’re still in school — think about this?

Note 1: Caveats. My main focus is on later primary to Bachelor degree students. Post-graduate education involves heavy specialization and early years’ learning is a lot of fun, so IMO these “bookends” to formal learning remain high-value. The focus on memorisation naturally, doesn’t apply to subjects like Maths, Statistics and Accounting. Unfortunately, this still leaves 70-80 per cent of school and uni subjects which students will continue to suck in and “vomit out” during exams.

Note 2: Strictly speaking, nothing wrong with conditioning itself. It’s what precisely we’re being conditioned to do. Nicol David is blessedly “conditioned” to trash opponents in squash. Alas, I think Malaysian kids — especially those who excel — are “conditioned” to memorise.