Singaporeans hold off Malaysia trips via land due to confusion over MySejahtera app, travel insurance requirements

A view of Johor Baru from Woodlands Waterfront Park in August 2021. — TODAY pic
Follow us on Instagram, subscribe to our Telegram channel and browser alerts for the latest news you need to know.

SINGAPORE, March 31 — When news broke that Singapore and Malaysia were easing travel restrictions for people from both countries, Singaporean freelancer Lim Hui Hui was ecstatic.

Having been used to making weekly day trips to Johor Baru before Covid-19 struck, the 23-year-old immediately made plans to resume her usual shopping getaway with her boyfriend on April 1, the first day of the border controls would be eased.

“I haven’t seen my friends living in Johor Baru for over two years, and I also want to pump petrol since it’s cheaper,” she said on Wednesday (March 30).

However, she encountered problems while registering for MySejahtera, a contact tracing application that is required for entry into Malaysia.

She was also confused about whether she needed to buy travel insurance to enter Malaysia.

So Lim decided to put off her getaway. “It’s such an overwhelming process,” she said, adding that she would wait until the kinks are ironed out before heading to Malaysia.

She is not alone. Five other hopeful travellers told TODAY that they have held off their trips, or are worried that they will not be allowed entry into Malaysia due to similar concerns.

TODAY has contacted the Malaysian immigration department for clarification.

Lim’s first hurdle was registering for an account on the MySejahtera app, which required her to provide a Malaysian residential address. She did not have one since she had no plans to stay in Malaysia.

“They require us to put a Malaysian state, so I just put Johor but typed my Singapore address,” she said. Although she was able to create an account, she is unsure if this would affect her entry into Malaysia.

Aside from that, she also found it difficult to update her vaccination status on the app, only to realise that it would take up to five working days for it to be approved.

“It’s quite a long period, and I’m not sure if I did it right since there aren’t any (clear) guidelines,” she added.

Suria Hafees, 44, a part-time assistant at a maid agency, said that her husband did something similar. “He registered his residential address with his Singapore address but put a Malaysian state since there was no option for ‘Singapore’.”

The Malaysian had not been back at her hometown in two years since the Covid-19 pandemic hit, and hopes to visit her parents in Port Dickson with her sons, aged 10 and seven. Her sons and husband are Singaporeans.

However, their plans to drive up next weekend are on the rocks.

When the couple tried to change his registered address to her parents’ address, they realised that they could only do it through MySejahtera’s help desk, which was closed on weekends. They have since managed to put in a query but have yet to get a response on whether the address can be changed.

Suria said: “I am afraid that since the address is totally wrong, it may affect the approval of (my husband’s) vaccination status. I really hope to be able to see my mother again, but we can only wait and see.”

On Malaysia’s MySafeTravel website, it is stated that travellers headed to Malaysia should verify their digital vaccination status on the site before entering Singapore.

Chong, a Singaporean who declined to give his full name, said that he, too, was unsure of the status of his MySejahtera registration and the need for travel insurance.

The 56-year-old had hoped to travel to Johor to buy groceries during the weekend, but he said that he was worried he would be turned away because he does not have travel insurance.

Malaysia’s Health Minister Khairy Jamaluddin said on Tuesday that all short-term visitors must get Covid-19 insurance to enter the country.

However, on Wednesday, the Malaysian health ministry tweeted an infographic clarifying that fully vaccinated travellers heading there via land crossing would not need to get travel insurance. 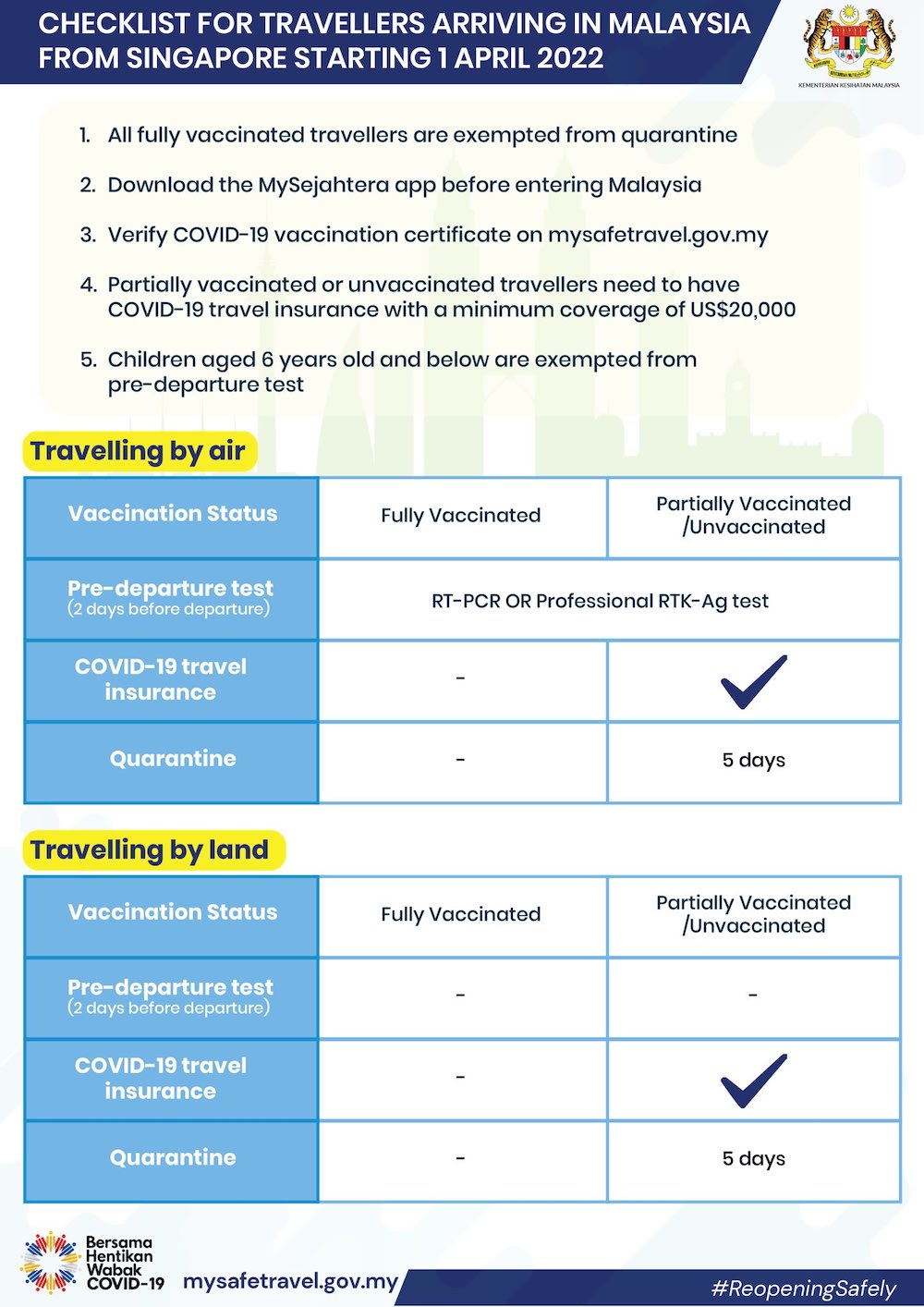 Chong said: “For a one-day trip that will only take a few hours, it’s too ma fan (Chinese for troublesome) to deal with all this.”

For now, he plans to wait and see how travel goes on the first weekend before deciding if he will resume his once-weekly grocery runs to Johor.

As for Suria, she only hopes that she will finally be able to visit her mother come next Saturday.

“My mother said we should quickly go up (north) in case the travel restrictions change again. She really wants to see the grandkids, more than her own daughter,” she joked. — TODAY