Timeline: How a deadly crush at an Indonesia football match unfolded

Chicks are seen at a farm in Bukit Cherakah, Puncak Alam February 8, 2022. ― Picture by Yusof Mat Isa
Follow us on Instagram, subscribe to our Telegram channel and browser alerts for the latest news you need to know.
By ASHMAN ADAM

KUALA LUMPUR, Feb 21 — “Every time a festive period rolls around, it is the same thing. For one reason or another, there will always be a shortage of chicken. Honestly, many chicken vendors are fed up with it, but this is our bread and butter. We do what we can with what we have.”

These were the words of Usman Mohd Rashid, a 30-year-old poultryman who plies his trade at Pasar Awam Moden Seksyen 6 in Shah Alam.

The ongoing saga of the nationwide chicken supply shortage is one that is familiar to Malaysians, who have faced this issue not once, but many times over the years — noticeably around major holidays.

Usman said that he did not understand why there should be a shortage, because the method of breeding is a constant, and it dictates the amount of chickens being slaughtered and sold to chicken mongers.

“From what I understand, it takes a month to breed chickens to be ready for slaughter. Every month, we always get the same amount of chickens. But come Hari Raya or Chinese New Year, suddenly, there are never enough chickens to go around.

“We need to make ends meet too, so when there is a shortage of chickens, we increase the prices to make sure we can pay all our bills. And when that happens, the government comes in and sets a ceiling — and we lose from there,” he told Malay Mail.

The federal government set a ceiling price of standard chicken to RM8.90 per kilogram. It took effect on February 5 and will last until June 5.

With the fasting month coming up in early April, 47-year-old Zainal Jamali, also a poultryman, shared his frustrations with Malay Mail, claiming that the government did not care about the well-being of ordinary folk like him.

“They put the price ceiling for chickens at RM8.90 per kilogram. We honestly barely make any profits from this. Maybe 30 sen, 40 sen at the highest.

“I have two helpers here. I have to pay their bills. I have to pay rent and utilities. Life is already hard enough for us, regular people. The government does not care about us,” he said.

Taking notice of the regular pattern of chicken shortages during the festive season, Usman — who has been selling chicken for over 30 years — always makes a contingency plan, but sticking to it has never been easy.

“I make plans to try and maximise my savings so I can provide a good life for my family, but it is so difficult to save. I complain to the officers (from the Domestic Trade and Consumer Affairs Ministry) when they come around, but they say they can't do anything,” he said.

As for egg shortages, minimart owner Mohamad Yusri Khalid, who has been operating at Dato’ Keramat Market in Kuala Lumpur for 23 years, said the shortage of eggs during Chinese New Year was unexpected, and something he had never experienced before.

He said that the supply of eggs has been one that he has depended on for a steady income, and that he had received lots of complaints from regular customers who either worked at or frequented the market. 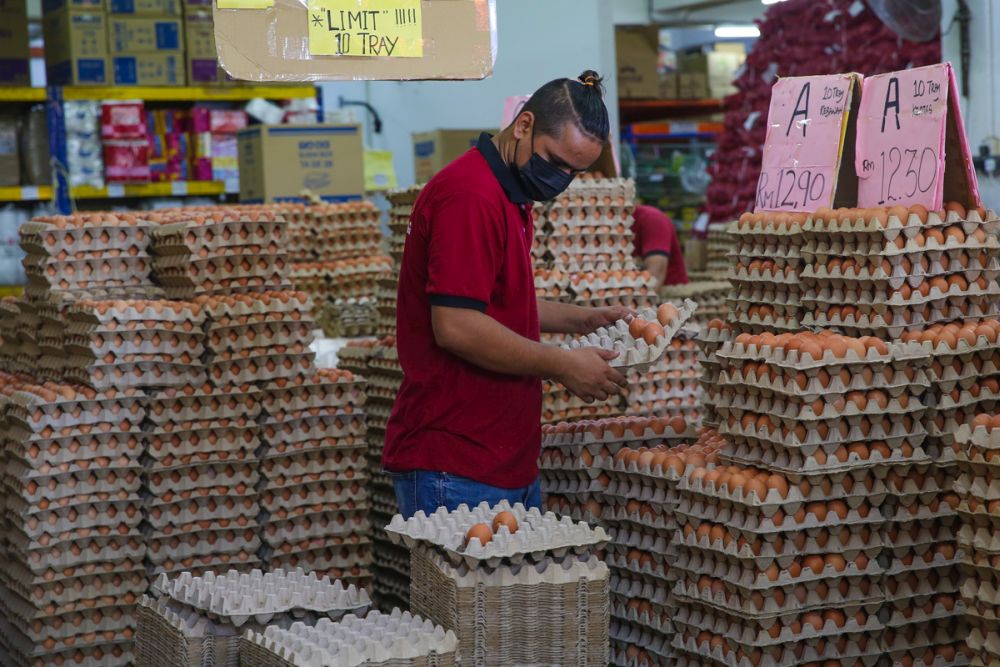 A worker arranges eggs for sale at a shop in Kuala Lumpur February 15, 2022. — Picture by Yusof Mat Isa

The chicken and egg shortages do not just affect poultrymen, but also consumers as the increase in chicken prices eats into household budgets.

Meena Tharshini — who does her weekly grocery shopping at Dato’ Keramat Market — has been forced to buy less chicken as her family cannot afford it.

The 41-year-old housewife said with her husband as the family’s only breadwinner, they barely have enough to feed themselves and their three children, aged between five and 11.

“Between my husband and I, I manage the family money. So I decide the grocery budget as well. I set aside RM150 a week for all my raw produce — fish, chicken, vegetables; once in a while some mutton.

“I will usually buy two chickens because my children’s favourite dish is my chicken curry — so I’ll make it twice a week. But nowadays, I can only budget for one,” she told Malay Mail.

Things are even harder for 32-year-old Nazmi Idris, who owns and runs a catering company.

Speaking to Malay Mail outside Dato’ Keramat Market, Nazmi said that the shortage of chickens has affected his already-fragile business, which is still recovering from the Covid-19 pandemic.

“This whole situation is a massive headache,” he said, while lifting a styrofoam box filled with chicken and ice into the back of his Ford Ranger.

“Fasting month is coming around, and I thought to myself, ‘Finally, I can bring in some business’ — with people holding doa selamat and breaking fast together and ultimately, Hari Raya.

“Now with the chicken prices going up, I have to up my price and limit the amount of food I can provide. People, who are my regulars, who order from me every year, question me and think I’m doing this just to make more profit when the truth is I am only just above the water,” he said.

Nazmi said that he used to charge RM30 per kilogram for any of his chicken dishes, but now to guarantee he makes the same amount, he charges a little bit more — RM40 per kilogram.

On January 31, Prime Minister Datuk Seri Ismail Sabri Yaakob announced the ceiling price of standard chicken had been set to RM8.90 following an increase in the price of chicken — effective from February 5 to June 5.

In addition to this, the price of eggs would remain the same as under the maximum price scheme, also to be in effect until June.

Recently, Agriculture and Food Industries Minister Datuk Seri Ronald Kiandee said the government has yet to decide whether to extend the subsidy for poultry farmers after June 4.

He said the current subsidy is provided for the period between February 5 and June 4, which is during the implementation of the Keluarga Malaysia Maximum Price Control Scheme (SHMKM), involving an allocation of more than RM500 million.

On February 15, the Ministry of Agriculture and Food Industries said it expected the supply of chickens and eggs to stabilise in the next four months to meet domestic demand following various incentives and subsidies provided to industry players, especially poultry farmers.