Muafakat already on its last breath, Umno's Zahid says of pact with PAS

Prepare to pay more as durian supply shrinks in Malaysia due to bad weather and changing growth cycle, Singaporeans told

Founder of KL Funeral Services, Parama Sarathy Naidu and his daughter, Managing Director of KL Funeral Services, Daniya Naidu take a photo during an interview at their headquarters on February 3,2022. — Picture by Miera Zulyana
Follow us on Instagram, subscribe to our Telegram channel and browser alerts for the latest news you need to know.
By YISWAREE PALANSAMY

KUALA LUMPUR, Feb 6 — For many, seeing death up close may be an unnerving idea but for 26-year-old Daniya Naidu, it’s just another day in her job as an undertaker.

A graduate with a degree in economics from an Australian university, Daniya never expected to join the morbid line of her father, Parama Sarathy Naidu.

Instead, the decision was something Daniya reluctantly made after the Covid-19 pandemic hit, leaving her jobless and unable to continue her master’s degree programme in Australia as she had initially planned.

From young, she had always envisioned herself as an “office lady” climbing the corporate ladder.

The eldest of four siblings, Daniya said she was always more academically inclined compared to her more business-minded siblings who joined their father’s business way earlier.

“The master’s degree programme I wanted to take was only being conducted online, and for me, the concept just would not work. I need physical classes to learn but some things had to change and so I decided not to take it and stayed put here in Malaysia. Searching for a job was extremely hard during the pandemic.

“So, one day, my father told me to follow him to his office and work for him. He said I was just sitting at home, aimless and wanted to distract me. I wanted to be a statistician. The pandemic changed the course for me, and I saw huge prospects here. In another two to three years’ time, getting jobs will be hard also, but death is imminent, it always happens and this pandemic is not showing signs of stopping, so I decided to stay put in Malaysia and join my father,” Daniya told Malay Mail.

Daniya has since taken to the business seriously and has visionary ideas to improve its appeal to women, whom she said remained reluctant to join the “rewarding” industry.

“I was never afraid of the dead. I have been seeing dead bodies since I was a child as I followed my father to work. My siblings, too. To me, at that time, I would think they were all sleeping while doing my school work. It was a routine thing,” she said. 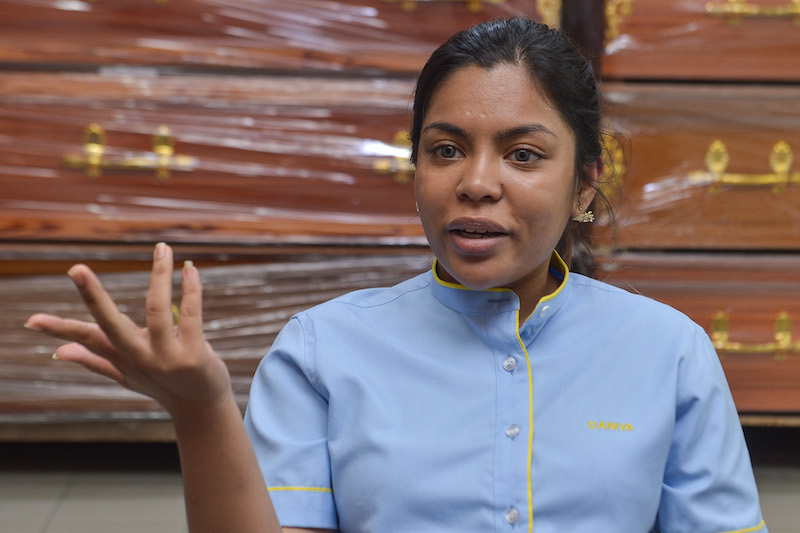 Managing Director of KL Funeral Services, Daniya Naidu is seen during an interview at their headquarters on February 3,2022. — Picture by Miera Zulyana

Despite her youth, Daniya, who is also fluent in Mandarin, said she felt under pressure to make up for the time she spent idling.

“I’m not young anymore, I’m already 26!” the University of Queensland graduate exclaimed while checking on the paperwork at the family business, KL Funeral Services in Taman Tan Yew Lai.

Her younger sister, Danija, is 18 years old and has been learning the trade since she was seven.

“I finished my SPM in 2013, then went to college and then abroad to University of Queensland in Brisbane. My dream was to work there. Open a restaurant there as a side hustle after I became a statistician. I wanted to branch out from the business. I had a dream.

“A lot of hardships happened. In my first semester in university, my brother passed away. I was distraught, distracted. I struggled to keep up my CGPA. In December 2019 I finished my studies and then in February 2020, I came back. I was supposed to go back in June 2020 for my graduation, but the lockdown happened. To add to things, our home went up in flames after an electricity short circuit.

“After that I started looking for jobs. I needed to get moving. But I had bad experiences at the places I went for interviews. So then, my father saw me and offered to work with him until I landed a job. So, I took his offer up. There is flexibility here, but work is still work. I got interested in this field and I started dealing with embassies, dealing with dead foreign citizens,” she said. 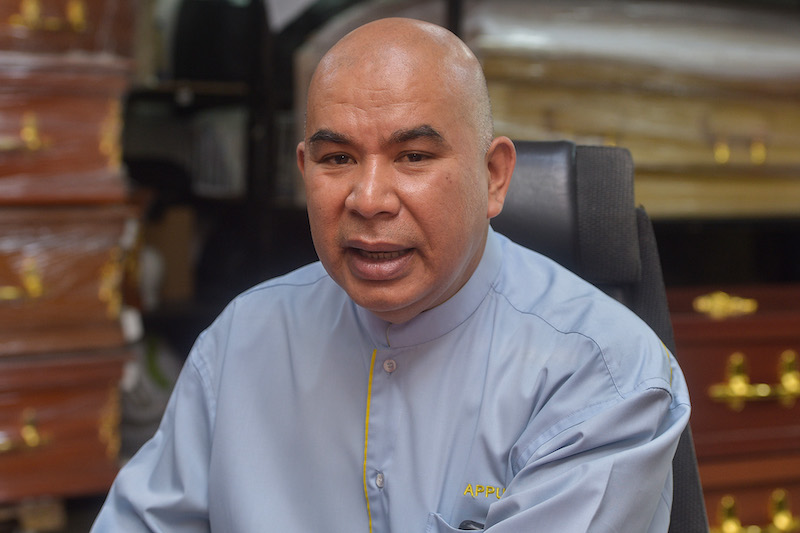 Founder of KL Funeral Services, Parama Sarathy Naidu during an interview at their headquarters on February 3,2022. — Picture by Miera Zulyana

It was during this time that a business idea hit Daniya.

“I saw many cases where families will be asking us if we provide female embalming services and have female workers bathing dead female family members. Then it hit me: Why can’t I do it? There is a demand for this and many women don’t want to be in it, so I started learning from our workers here. My other brother is a certified embalmer, so he trained us and I started learning,” said Daniya, who is working on her certification.

She and her sister, Danija, hope to change the perception of the industry among the fairer sex and to encourage more women to join the field.

Daniya was exceptionally passionate in explaining the process of preparing the dead before their funeral rituals.

She acknowledged that steps could be hard to stomach for those unaccustomed, but said it was important to remember that each body she cleans was once a living person.

“I view them as a family member, a human helping another human. I felt bad when we had to say no when families asked for female embalmers. Malaysia is a rare case in this matter when compared to Australia, which has many women in this field.

“We need more women to be open-minded and to see this as a decent job. A job which accords dignity to your loved ones. Some family members don’t even want to bathe their loved ones, and ask us to do it. This job is dignified and affords dignity, too. I want their last journey to be one with dignity. I am yet to get my certification as an embalmer, but I am almost completing my learning. My sister is also learning and is able to do it. We have another female worker who is also learning, but she has more experience. So we are busy, as we do have a demand for such a service. It stands the test of time.

“It’s not a job to be ashamed of. I’m an economics graduate and I am not ashamed to say that I clean and embalm the dead for a living. We are the biggest exporter in this business. My vision is to bring more women to this line. It is one of my biggest visions, as this is an interesting field, it’s niche and rewarding regardless of the stereotype some label us with, Daniya added.