Disunity among Opposition now normal, should resolve itself by GE15, say analysts

A volunteer putting up PH flags at Jalan Klebang for the Melaka election, November 8, 2021. — Picture by Shafwan Zaidon
Follow us on Instagram, subscribe to our Telegram channel and browser alerts for the latest news you need to know.
By YISWAREE PALANSAMY

KUALA LUMPUR, Jan 29 — The current disunity among the Opposition was not unusual and should resolve itself in time for the 15th general election, two political analysts said.

Political analysts Prof Kartini Aboo Talib @ Khalid and Prof Sivamurugan Pandian said the open disagreements among the allies likely suggested that a general election was near.

Despite the apparent disunity, they said political rivals should not discount the Opposition parties.

“Opposition seemed to be disunited during both the Sarawak and Melaka elections. However, they always put aside the differences during the general election,” Sivamurugan from Universiti Sains Malaysia (USM) said.

“Although Parti Warisan (Warisan) has been showing its interest to lead and become a strong viable alternative, it depends on who they will work with during polls. The other Opposition parties might also have their plans during the general election and they would not be easy to defeat if the people still want them as a strong alternative to avoid a big mandate,” he told Malay Mail.

In November last year, Barisan Nasional (BN) won the Melaka state election with a supermajority and comfortably formed the state government without needing any other support including from its estranged allies in Perikatan Nasional (PN).

Pakatan Harapan’s (PH) representation in the state was slashed to just five seats, with DAP winning four and Parti Amanah Negara (Amanah), one.

In the 12th Sarawak state election in December, PH was reduced to just two seats — DAP’s Padungan and Pending — while PKR and Amanah lost in all the seats they had contested.

According to Kartini, the cracks in PH date back to when Datuk Seri Mohamed Azmin Ali decided to abandon PKR for Parti Pribumi Bersatu Malaysia (Bersatu), in the “Sheraton Move” of 2020.

However, she said she expected the pact to close ranks again when the time came.

“PH has been non-cohesive before, especially when team Azmin decided to leave PKR and be with Bersatu led by Tan Sri Muhyiddin Yassin. In addition, PAS left PH, Amanah was born, plus members of the DAP started to criticise the eminent leaders, namely Lim Kit Siang and the likes, for their old school approach and demanded for a new team of leaders.

“Internally PH is divided, but close to the 15th general election, they will find ways to realign and to be together strategically,” the Universiti Kebangsaan Malaysia (UKM) academic said.

She said it remained to be seen how others such as Warisan and the Malaysian United Democratic Alliance (Muda) would fit into the equation.

“They can stand on their own and decide later to be with the alliance that forms the government, or if they prefer to be on the Opposition's bench to balance democracy,” she said.

Kartini said, however, that the parties’ best chance for victory would be to band together.

Among Opposition parties, PH is the largest and most visible, which also made the coalition’s disagreements the highest profile.

However, the former ruling coalition has worsened the perception by openly telegraphing its internal disagreements. 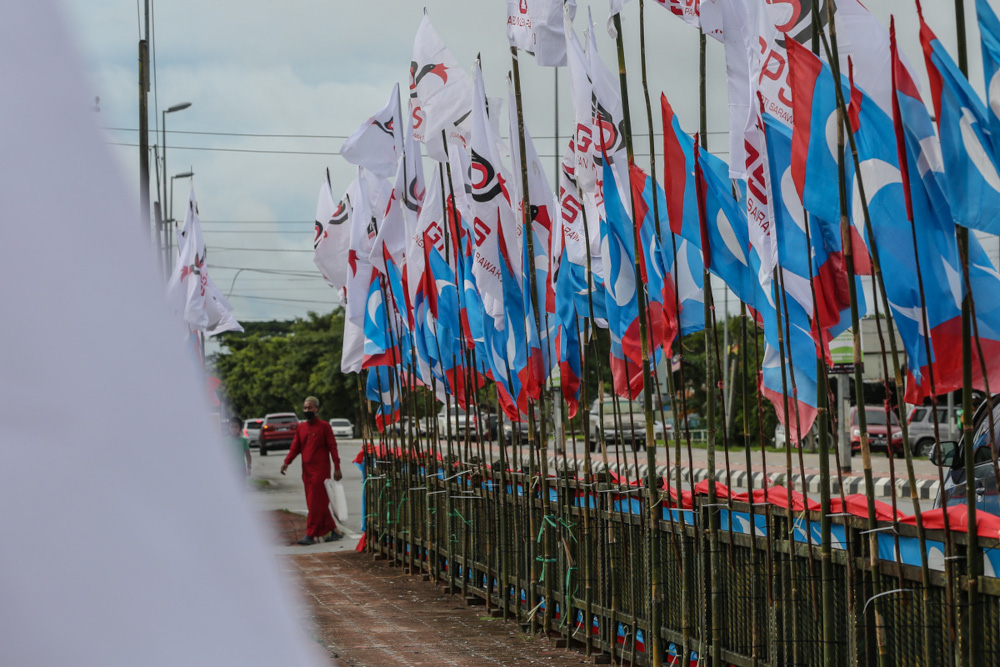 Party flags are pictured ahead of the 12th Sarawak state election in Kuching December 10, 2021. — Picture by Yusof Mat Isa

In the Sarawak state election, for instance, the PH parties of PKR, DAP, and Amanah all contested using their own logos instead of running together as PH.

The apparent disunity will continue in Johor where PKR will use its logo while DAP and Amanah will contest as PH, despite the coalition’s attempt to portray the decision to use separate logos as having been reached by “consensus”.

DAP's party strategist Liew Chin Tong suggested that some in PKR were pushing for the party to use its own brand, even as the DAP and Amanah felt the coalition should unite under PH that was now a formal coalition.

PKR organising secretary Nik Nazmi Nik Ahmad claimed the party’s decision to use its own logo in the upcoming Johor state elections, is due to “overwhelming” requests to do so from the party’s grassroots and supporters.

According to Senior Fellow at the Nusantara Academy for Strategic Research (NASR) Prof Azmi Hassan, the disunity among the Opposition will allow Umno and BN to pick them off easily during elections.

He said that this was why Umno pushed the Johor state election, as the party is already “looking for the bigger picture of the general election”.

Unlike in 2018, he said there was no unifying force like Tun Dr Mahathir Mohamad for the Opposition to rally around.

Worse still, he said newcomers such as Pejuang, Muda, and Warisan likely saw themselves as better placed to lead the Opposition charge, making it more challenging to convince them all to cooperate as part of a larger coalition.

“If the state election of Johor is to be held soon and Umno sweeps Johor as what they did in Melaka, then most probably GE15 will be very, very soon and with a soon GE, the Opposition I think will be in deep trouble because they are currently at the weakest point right now,” Azmi added.

Last Saturday, Sultan Ibrahim Sultan Iskandar consented to the dissolution of the Johor State Legislative Assembly to pave the way for the state election.

Osman’s had left the previous Johor government with a one-seat majority, allowing Umno to seek the state election ostensibly for greater political stability.