A Nasi Kandar Hameediyah staff holds up fried calamari rings at the restaurant on November 24, 2021. — Picture by Sayuti Zainudin
Follow us on Instagram, subscribe to our Telegram channel and browser alerts for the latest news you need to know.
By OPALYN MOK

GEORGE TOWN, Nov 24 — Hameediyah Restaurant, famous for its nasi kandar, defended the price it charged a customer who posted on social media that two fried squid from the outlet cost RM100.

Hameediyah Restaurant director Mohd Riyazz Syed Ibrahim said they have different sizes of fried squid, from small to extra large, that are priced between RM10 and RM120 each.

“We have even sold a large squid that weighs 1.2 kilogramme which costs over RM120 for one when there were VIPs dining here and we have never received a complaint about the price,” he said.

He said the restaurant is known for offering exotic food items such as extra large squid, turkey, duck and even rabbit meat.

“Our regular customers know about our exotic food items and the higher prices for these items,” he said. 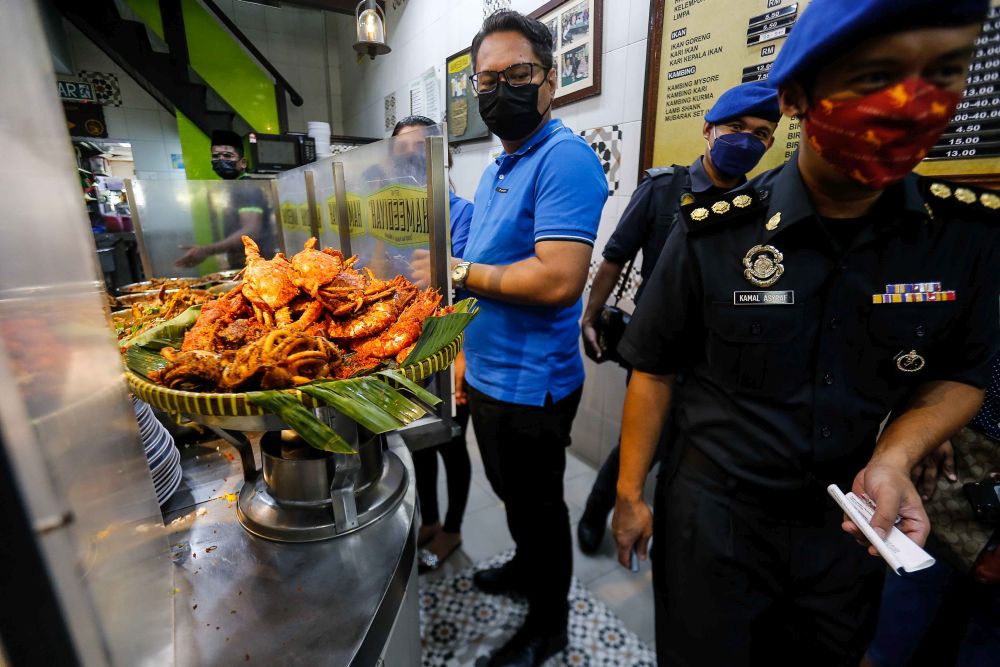 As for the social media post that was shared around showing a receipt from the restaurant that itemised fried squid at RM100 for two pieces alongside a picture of one of the squid, Riyazz said he was the one who calculated the bill for that order.

“The customer ordered it for takeaway and when the prices were entered and shown on the register, the customer did not say anything and when I told them the total price, they paid for it without complaining or rejecting,” he said.

He said if the customer was unhappy with the price, they should have immediately rejected it when he gave them the bill.

“We will not force them to pay because they were ordering takeaway, so they can choose not to take the food if they are unhappy with the price,” he said.

He also stressed that the squid ordered by that customer were the large sized ones, which are RM50 each.

“In the picture, it looked small but in reality, it is larger than the normal squid,” he said.

Riyazz said the cost of ingredients such as chicken, squid, crabs and prawns have also increased in recent weeks.

“The customer has probably not been to the market to buy seafood because the prices of these items have increased and of course, we have to charge higher than the raw ingredient price because we have to take into account other costs such as manpower and spices,” he said.

He said most of their ingredients are sourced locally and the squid they offer are freshly frozen orders from a local supplier.