A view of the city skyline in Kuala Lumpur August 17, 2021. ― Picture by Yusof Mat Isa
Follow us on Instagram, subscribe to our Telegram channel and browser alerts for the latest news you need to know.
By ASHMAN ADAM

South-east Asia’s third largest economy has chalked up 1,489,460 cumulative cases to date since the start of the pandemic last year.

“Overall, 17,981 or 78.4 per cent of those infected today either have only received one dose of the Covid-19 vaccine or have not had it at all,” said Dr Noor Hisham.

Malaysia also recorded 178 new deaths today, involving 155 locals and 23 foreigners. This number includes 35 who were brought-in-dead (BID), of which 26 were locals, while nine were foreigners.

“Of the 178 deaths today, 65 were cases from Selangor, 36 from Johor, 23 from Kuala Lumpur,  11 from Sabah, eight each from Penang, Pahang and Melaka, five from Kelantan, four each from Negri Sembilan, Sarawak and Terengganu and one each from Kedah and Perak,” said Dr Noor Hisham.

Dr Noor Hisham added that there are 1,060 currently being treated in intensive care units (ICU), with 528 of them needing the help of ventilators to help them breathe.

On Covid-19 clusters, 42 were detected in the last 24 hours, with 23 of them involving workplaces, 15 from community transmissions, two involving holding facilities, one involving a high risk group and one involving a religious activity.

Dr Noor Hisham also shared that the nationwide rate of infection still stands at 1.04, with Perlis still the highest and recording an increase in its rate of infection at 1.33, followed by Sarawak at 1.21 and Sabah at 1.19.

“Every state is recording a rate of infection higher than 1.0 except Selangor, Kuala Lumpur, Putrajaya, Labuan and Negri Sembilan,” he said.

On the brighter side, 21,720 people have recovered from the deadly disease, bringing the cumulative number of recoveries in the country past 1.2 million, with 1,220,446 or 81.9 per cent recovered cases recorded. 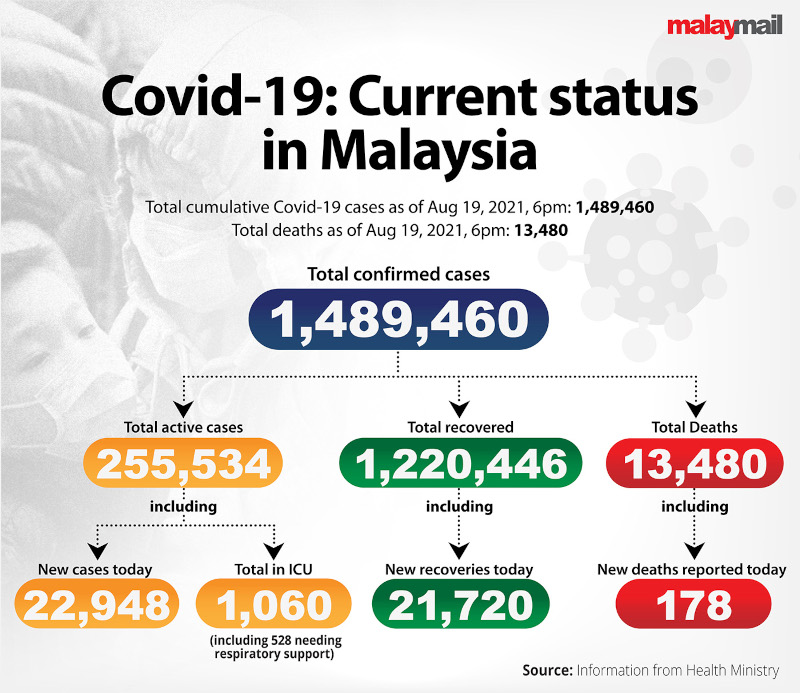