Members of the public adhere to Covid-19 SOPs as they take part in the ritual slaughter of a cow during Hari Raya Aidiladha at the Kota Damansara mosque in Petaling Jaya July 20, 2021. — Picture by Ahmad Zamzahuri
Follow us on Instagram, subscribe to our Telegram channel and browser alerts for the latest news you need to know.

The people concurred with bans in some states against performing the rites for the good of all quarters.

In Seremban, the Taman Bandar Senawang Mosque secretary, Nazri Mat Noh, when met, said the atmosphere of the Aidiladha celebration was still felt with the residents in the housing estate reciting the “takbir raya” in their respective homes.

“This is the first time I am not performing the activity of slaughtering sacrificial animals at the mosque but we comply with the ruling for mutual safety,” he said.

The Negri Sembilan State Mufti Department issued a statement postponing the sacrificial rites in the state following the spread of Covid-19 variants of concern.

In Shah Alam, State Islamic Religious Affairs, Consumer Affairs and Halal Industry Committee chairman, Mohd Zawawi Ahmad Mughni told Bernama that Selangor allowed the sacrifice of three cows a session with each animal being handled by five workers who had been vaccinated.

“The sacrificial meat is also distributed to zakat recipients, the poor and groups impacted by Covid-19,” said Mohd Zawawi.

In Kuantan, the Sultan Ahmad 1 State Mosque fixed a maximum of five cows in a sacrificial session with not more than 10 people assigned to avoid congestion.

The second imam of the mosque, Mohd Saiful Bahari Kasim said the individuals involved in the slaughtering and butchering the meat of the sacrificial animals had undergone Covid-19 screenings yesterday.

The meat would be sent to the roadblock tents to be picked up by the “ibadah korban” participants or the poor from areas placed under the enhanced movement control order (EMCO), he said.

It was a muted celebration in KOTA BHARU following the ruling that banned Aidiladha prayer at the mosques to curb the spread of Covid-19 and only allowed the sacrificial rites to be conducted at selected mosques. 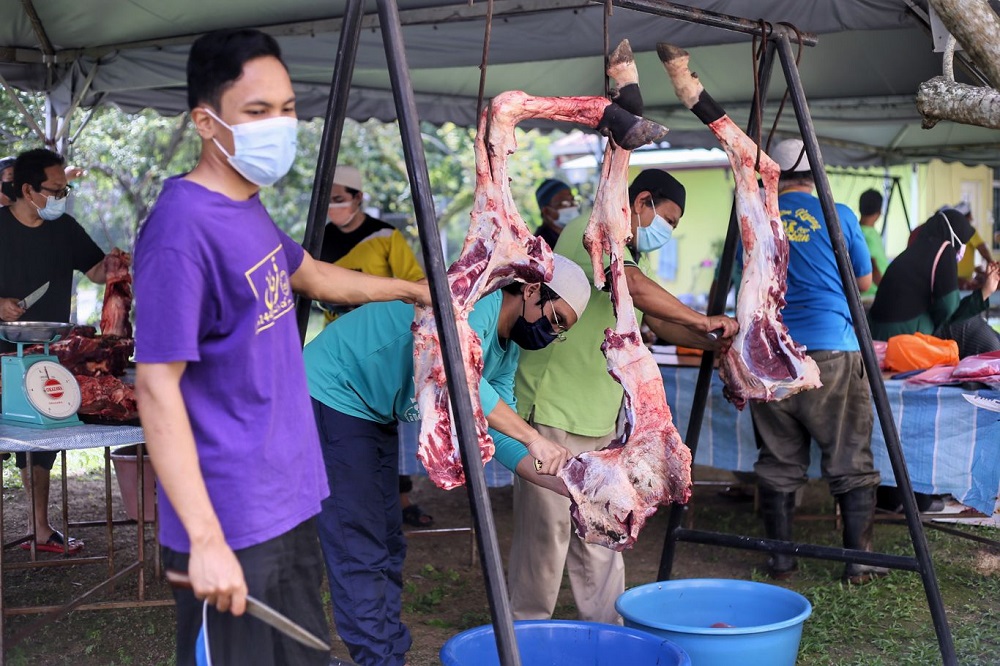 Members of the public adhere to Covid-19 SOPs as they take part in the ritual slaughter of a cow during Hari Raya Aidiladha at the Kota Damansara mosque in Petaling Jaya July 20, 2021. — Picture by Ahmad Zamzahuri

The Imam Muda of the Sultan Muhammad II Mosque, in Telipot, Mohd Faiz Mohd Zainudin said 10 cows would be sacrificed at the mosque today and tomorrow with five cows being slaughtered a day by 25 workers.

Meanwhile, in Kuching, the animal sacrificial rites are not allowed following the finding of a new Covid-19 variant in Sarawak despite entering Phase Two of the National Recovery Plan (PPN).

In Penang, Deputy Chief Minister 1 Datuk Ahmad Zakiyuddin Abdul Rahman, who is also Penang Islamic Religious Council (MAINPP) president, said only five animals were allowed to be slaughtered in mosques and surau daily in the state.

He said the sacrificial committee for every mosque and surau must get consent from the district religious offices first and ensuring all SOPs were met.

In Terengganu, At-Taqwa Mosque in Batu Enam Kuala Nerus, Aidiladha sacrifice programme manager, Mohd Akmal Othman said they took the initiative of obtaining relatively smaller animals as they were cheaper since the community were facing financial constraints due to Covid-19. — Bernama