KUALA LUMPUR, July 29 ― A total of 13 new Covid-19 cases were recorded in Malaysia over the past 24 hours, while five more patients recovered and were discharged.

Health director-general Datuk Dr Noor Hisham Abdullah through a statement today said that of the new infections, eight are imported, while the rest are local transmissions.

He said the eight imported cases involved four Malaysians and four foreigners returning from nations such as the United Kingdom (two cases), India (two cases), and one case each from travellers arriving from the Philippines, Pakistan, Gambia and Ukraine.

Dr Noor Hisham said of the five local transmission cases, three involved Malaysians: one in Johor involving a seamen signing off from work, one case in Sarawak as part of the Sentosa cluster, and another in Sabah following symptomatic screening done at Hospital Queen Elizabeth in Kota Kinabalu.

The remaining two cases of local transmissions that involved foreigners saw one case reported in Sarawak as part of the Mambong cluster and one in Perlis of an illegal immigrant screened before being moved to the Kangar Immigration Detention Depot.

“As of now, only two Covid-19 positive cases are being treated within Intensive Care Units. One (patient) requires breathing assistance,” he wrote.

No new deaths were recorded over the past day, leaving the mortality rate at 1.38 per cent with 124 deaths. 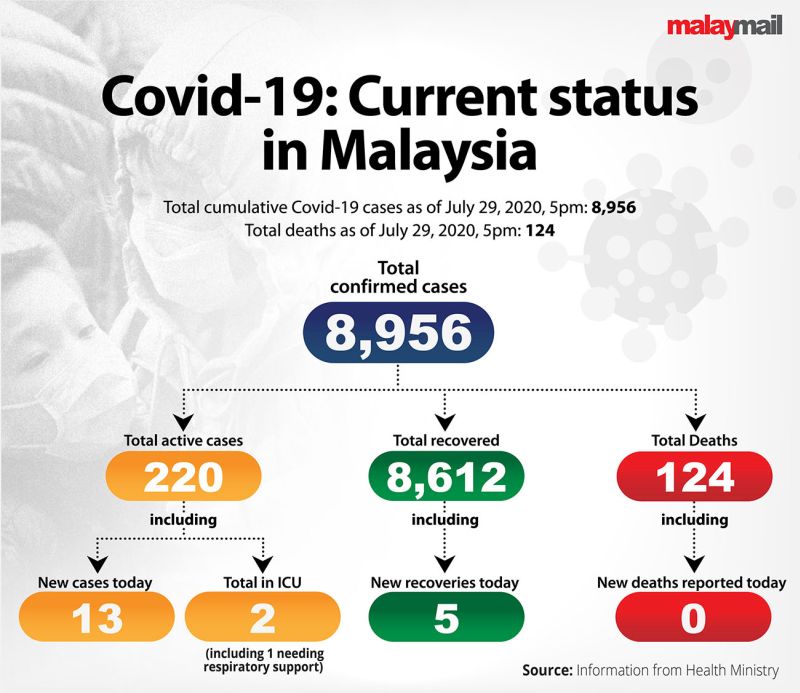