The owner of Permaculture Farm Vladislav Kuta shows fruits and herbal crops cultivated at their sustainable farm October 1, 2019. — Picture by Farhan Najib
Follow us on Instagram, subscribe to our Telegram channel and browser alerts for the latest news you need to know.
By JOHN BUNYAN

The state government obtained a court order to evict the operators of Permaculture Farmstay which was once featured in a National Geographic TV series.

The farm, run by Amy Tan, 40, and her husband Vladislav Kuta, 46, was on land leased from the Perak State Development Corporation’s (PKNP) back in 2008.

Tan said that the eviction notice was first served to them in 2011 after PKNP approved 80.93 hectares of neighbouring land to a timber company for a eucalyptus plantation.

“Our eviction notice was first served in 2011 based on non-payment of rent. This was also the same time after the landlord rented the neighbouring plot to a timber company for monoculture plantation,” she told Malay Mail, when met during the eviction process here today.

Tan, who is a former accountant, explained that they did not pay the rent in 2011 as there was a squatter issue.

“Before the timber company came, there were some individuals who encroached into our land. Despite several complaints to the owner, no action was taken.

“However, after we received the eviction notice, we resumed our rental payments, including arrears, but they were returned multiple times,” she added. 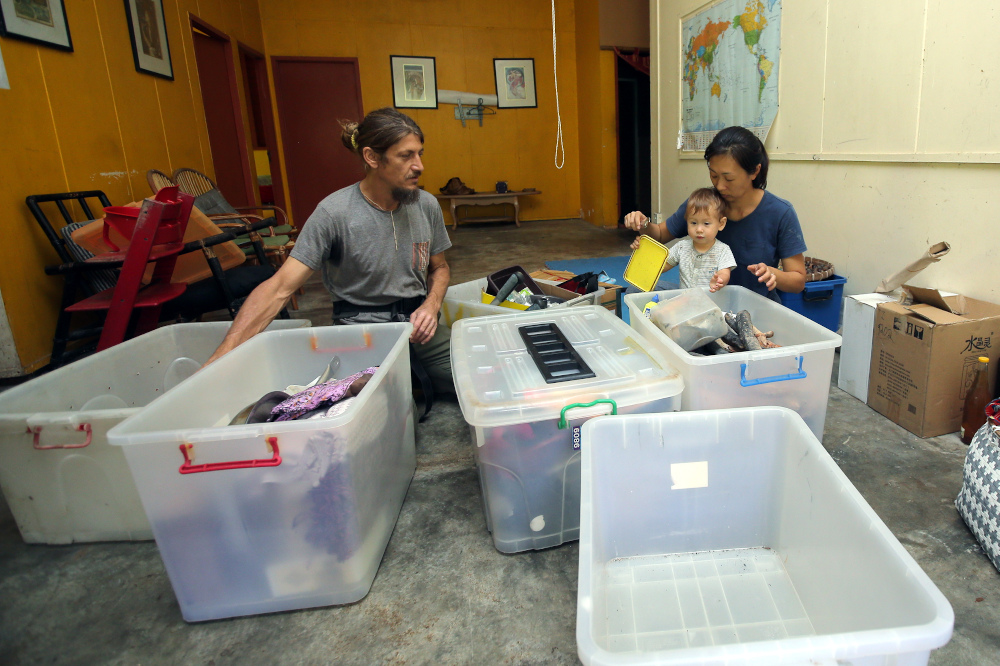 The owners of Permaculture Farm Amy Tan, 40, and her husband Vladislav Kuta, 46, packing up their things after their farm in Lenggong was closed following eviction by the state government October 1, 2019. — Picture by Farhan Najib

The mother of three children aged between one and six explained that the farm is a sustainable living education centre which teaches visitors on how to live off the grid.

“We have hosted thousands of local and international tourists in our farm. We also have a group of students coming in almost every month, where they will get hands-on experience on how to set up a garden, water and solar system and also learn how to plant trees and herbal crops in a sustainable way,” she said.

Tan also said their approach is not focused so much on commercial organic farming on an industry level, but more on individual sustainable lifestyles.

She also said the farm promotes tourism in the state as the area is a haven for wildlife such as hornbills, gibbons, wild elephants, monkeys and even tigers, which makes it an ideal nature retreat.

“However, with the recent vast land clearing and monoculture plantations, some of this wildlife has lost their habitat,” she added. 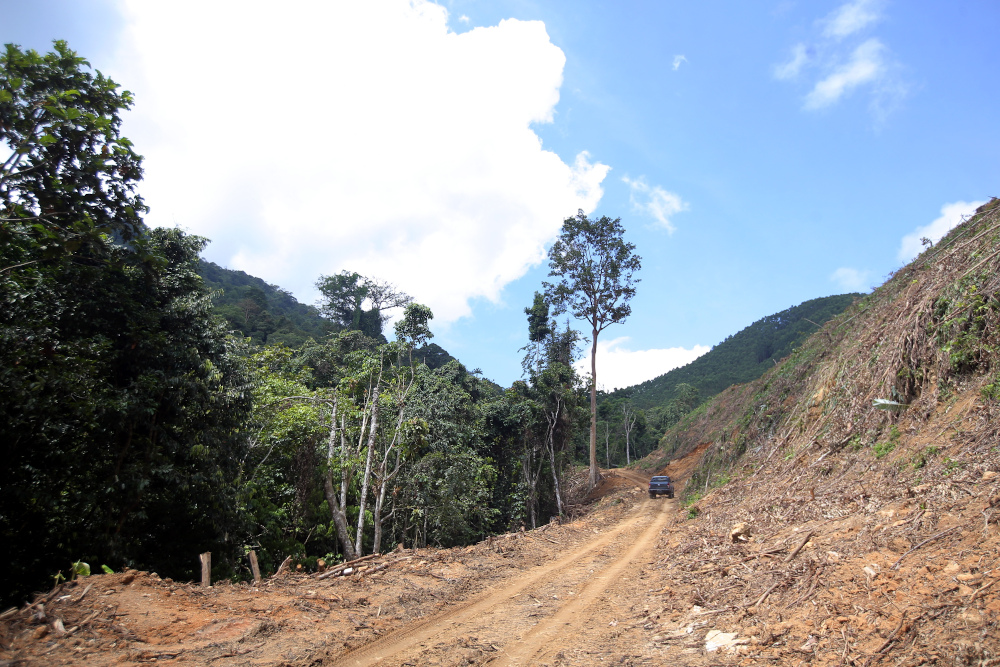 The owner of Permaculture Farm, Vladislav Kuta, shows the neighbouring land which was cleared for monoculture plantation near their sustainable farm October 1, 2019. — Picture by Farhan Najib

Tan said that the timber company also affected their sustainable farm after it cleared about 4.05 hectares out of 15.57 hectares of their land, on which crops like lime, sorghum, coconuts, pomelo, and pumpkins were planted.

“We lost about RM100,000 due to the illegal clearance by the company. We have made reports to the landlord, but again it has fallen on deaf ears.

“The timber company also cleared the land they rented, which was once a forest with huge towering trees. The land in the area is steep, any clearing there will eventually cause landslides and affect the quality of the river water nearby,” she said.

Tan said that they have filed reports of open burning to the Department of Environment of this new eucalyptus project and also submitted reports to the Human Rights Commission of Malaysia (Suhakam) about the water contamination downstream of Lenggong town.

Despite several attempts to meet the authorities and state government to talk over the land issue, Tan said no one has responded to them.

“After the government changed, we were told by the new PKNP management to send a new application for the land as we’re willing to lease or buy it. We had submitted several applications since then, but nothing was heard from them.

“We showed our National Geographic episode on ‘Living Free With Kim Werner’ in 2016 to the State Tourism Committee chairman Tan Kar Hing.

“He said he was willing to meet us after seeing the video, but despite following up with his personal assistant, no response was given,” she said.

“We also submitted our application to the Mentri Besar’s office twice and in April Water, Land and Natural Resources Minister Dr Xavier Jayakumar was on a working visit to the eucalyptus plantation.

“We managed to speak to him and gave him a copy of our proposal and explained to him our intentions and challenges,” she added.

She said that they don’t have an alternative place to open a new farm and vacating the place had cost them about RM400,000 as they could not move the 2,000 fish they were breeding and hundreds of crops and herbs, which they had cultivated over the past 11 years. 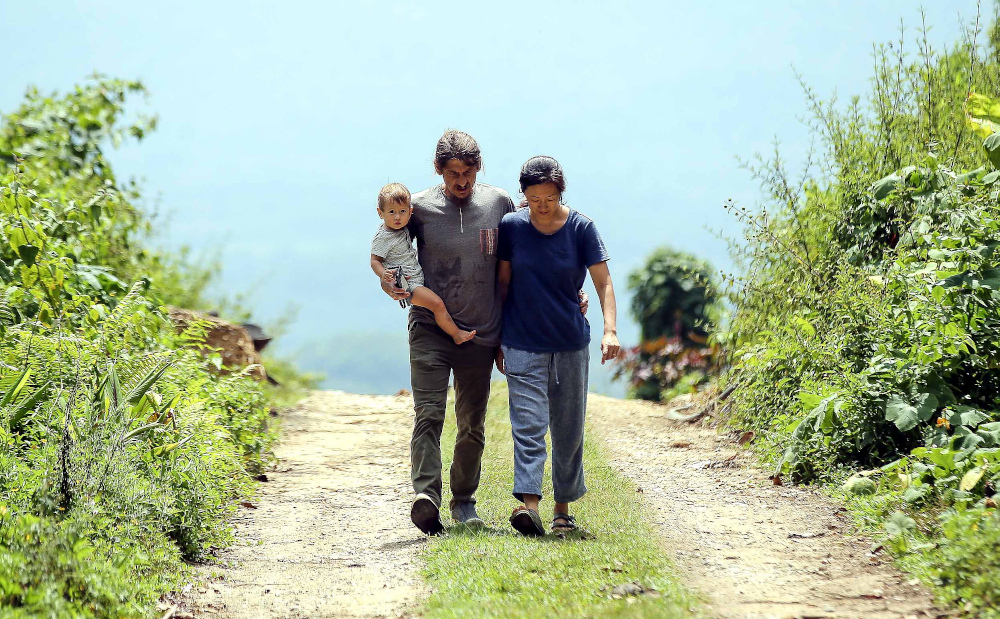 The owners of Permaculture Farm Amy Tan and her husband Vladislav Kuta were left devastated after the farm in Lenggong was closed following eviction by the state government. — Picture by Farhan Najib