Anyone who flies out from Malaysia will have to pay tax in the form of a departure levy ranging from RM8 to RM150 from this September 1. — Reuters pic
Follow us on Instagram, subscribe to our Telegram channel and browser alerts for the latest news you need to know.
By IDA LIM

KUALA LUMPUR, Aug 2 — Anyone who flies out from Malaysia will have to pay tax in the form of a departure levy ranging from RM8 to RM150 from this September 1, the government has announced.

In a ministerial order gazetted by the Federal Government on July 31, Finance Minister Lim Guan Eng set out the departure levy rates depending on the destination abroad and whether the flight is economy class. 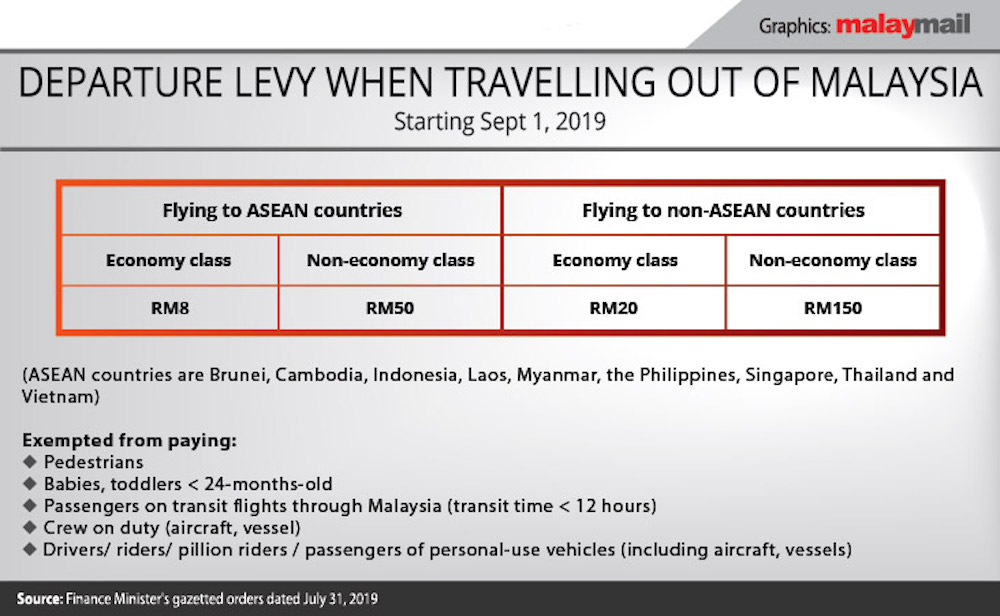 If you are flying from Malaysia to Asean countries, you will have to pay either RM8 as an economy class passenger, or RM50 if you are not flying economy.

Economy class refers to flights that are advertised and sold by airlines using economic terms or their equivalent, or having the lowest prices when compared to other packages, the Departure Levy (Rate of Departure Levy) Order 2019 explained.

In a separate order also dated July 31, the finance minister said the departure levy will be imposed from September 1.

Separately in another order dated July 31, Lim said the departure levy will not be imposed on infants and toddlers aged below 24 months, or pedestrians.

According to the order from the finance minister, certain operators are exempted from having to register and charge the departure tax on passengers.

These include operators of any water or land vehicle, any government operating any type of vehicle carrying out passengers from Malaysia, or any commercial vehicle operators who provide chartered air transport services for carrying workers to oil rigs or platforms.

The Departure Levy Bill 2019 was passed by both the Dewan Rakyat and Dewan Negara this year, with the new law granted royal assent on July 3 and gazetted on July 17.

According to the Departure Levy Act 2019's Section 9, anyone who fails to pay the departure levy where applicable may be fined up to RM500,000, imprisoned up to three years, or both.

In his speech when tabling Budget 2019 on November 2, 2018, Lim had said the government was proposing to impose a departure levy for all outbound travellers leaving Malaysia by air starting from June 1.

Lim had then said the proposal was intended to encourage domestic tourism, also noting that the proposed rates then of RM20 for Asean destinations and RM40 for non-Asean destinations was consistent with rates charged by others such as Thailand (US$20), Hong Kong (US$15) and Japan (US$10).