Prime Minister Tun Dr Mahathir Mohamad with Communication and Multimedia Minister Gobind Singh Deo ride the 5G autonomous car during the launch of Malaysia’s 5G network in Putrajaya April 18, 2019. — Pictures by Mukhriz Hazim
Follow us on Instagram, subscribe to our Telegram channel and browser alerts for the latest news you need to know.
By By Jerry Choong

PUTRAJAYA, April 18 — Prime Minister Tun Dr Mahathir Mohamad got his first glimpse of 5G network today as he was taken for a ride in an autonomous, driverless Proton Exora multi-purpose vehicle (MPV) at the showcase here.

Accompanied by Communications and Multimedia Minister Gobind Singh Deo, Dr Mahathir boarded the car’s back seats in front of the Palace of Justice, where it would take them to the Putrajaya Corporation Complex 100 metres away.

With the help of air drones and cameras in the vehicle, both men could be seen gesturing and waving to the crowd as the vehicle slowly made its way to the complex for the 5G Malaysia Showcase. 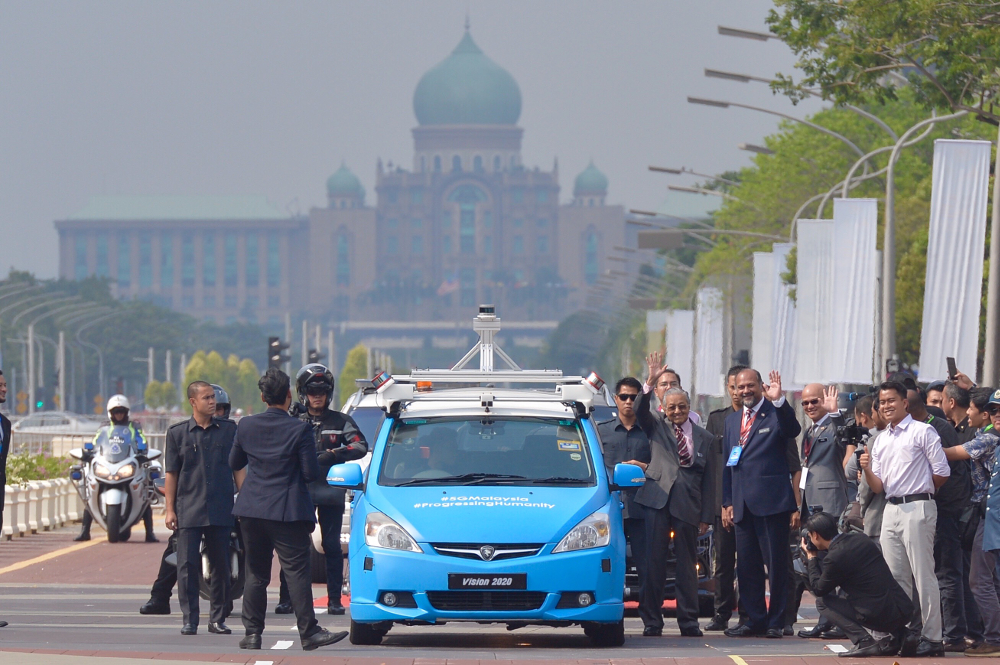 Prime Minister Tun Dr Mahathir Mohamad and Communication and Multimedia Minister Gobind Singh Deo wave at the crowd as they stand next to the 5G autonomous car.

Although the car drove itself, a safety driver sat at the front seat with both his hands visible in the air to indicate he was not holding the steering wheel.

The driver also explained the operation mechanism of the autonomous car to Dr Mahathir and Gobind.

Moving at a slow pace along Persiaran Perdana, the car arrived at the complex’s front entrance within five minutes, to generous applause by the crowds gathered to welcome the prime minister.

The MPV is fitted with an array of cameras, radar and LIDAR sensors which enables the car to sense its surroundings, according to tech website SoyaCincau.

The driverless system is developed by eMooVit, a tech startup that focuses on autonomous vehicle software.

This customised Exora is considered to be a level 4 autonomous system as it can drive by itself including turning the steering wheel and pedals. However, a driver is still required behind the wheel.

In addition to 5G’s touted performance of offering 100 times faster Internet connectivity than 4G, companies around the world are also endeavouring to make autonomous, driverless into mobile data centres which enable them to make complex decisions in real-time.