Services driving economy, but what’s next?

KUALA LUMPUR, June 12 — Malaysia’s Gross Domestic Product grew 4.2 per cent last year and more than half of it came from the services sector.

With a 5.5 per cent growth last year, services has also overtaken manufacturing, plantations and mining and is expected to hold its economic pole position for the foreseeable future in line with the government’s ambitious transformational agenda in its 30-year roadmap for developed nationhood by 2050.

“In comparison, the manufacturing sector recorded a slower growth of 4.8 per cent per annum with its share to GDP leveling off at 23 per cent in 2016 from 23.4 percent in 2010,” economist Yeah Kim Leng said.

According to data from the Department of Statistics (DOSM), last year’s growth rate would not have been possible if not for the services sector that covers retail, real estate, recreational activities and more.

Based on DOSM reports, the biggest services sub sectors are wholesale and retail trade, which has been steadily growing at 7.2 per cent since 2011 and alone contributed 14.4 per cent of the GDP last year.

The other significant contributor within the services sector is the information and communications industry, which contributed 5.9 per cent to the GDP last year. 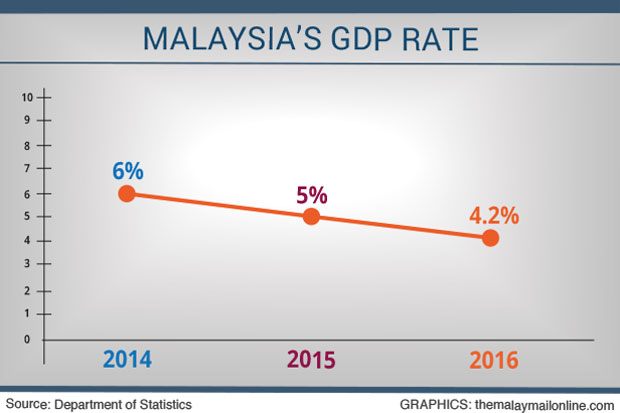 How did services grow so big?

The services sector has been steadily expanding its role as a key economic driver over the past six years at an average rate of 6.1 per cent; it represented 54.2 per cent in terms of its share-to-GDP at the end of 2016 compared to 51.2 per cent in 2010.

Economists said the sector’s gallop to the economic forefront for Malaysia is typical of countries aspiring to developed nation and high-income status, adding that the demand for new types of services helped it rise to the top even as it acts as a support for other industries like manufacturing and commodities.

“When tin mining was the main business for Malaysia in the late 19th century, the train system was introduced to support the sector by transporting workers and tin,” said Firdaos Rosli, a fellow of economics at the Institute of Strategic and International Studies (ISIS).

“For Malaysia, greater emphasis has been placed on pushing the services sector as the prime growth of the economy,” he told Malay Mail Online.

Like Lee, Jayant Menon, lead economist at the Asian Development Bank, said the services sector in high-income countries is usually dominated by education, health and finance.

However, in Malaysia, the health and education sub-sectors have expanded relatively slower than the wholesale, retail and real estate activities. 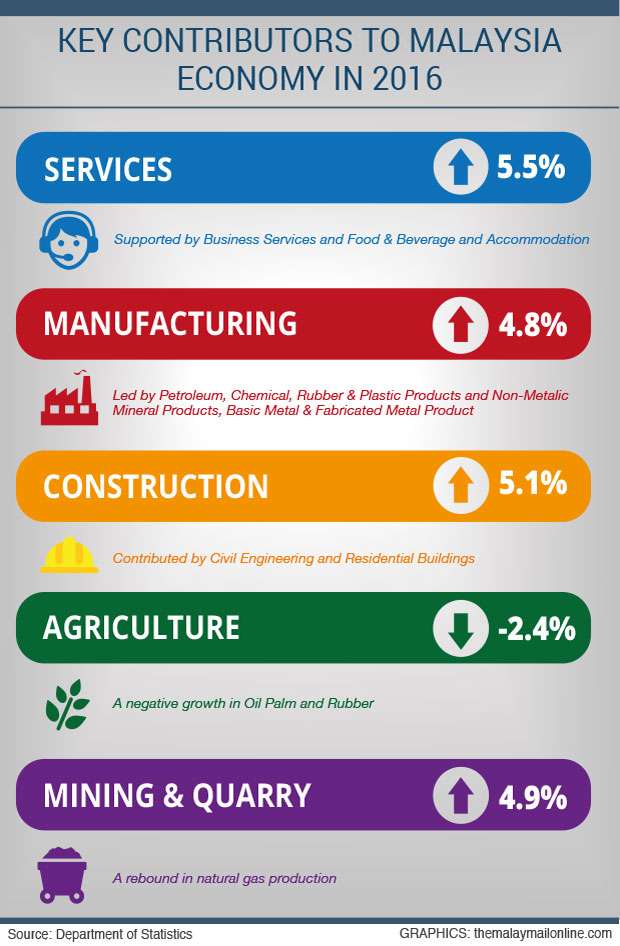 MIDF Amanah Investment Bank chief economist Kamaruddin Mohd Nor said he expects the support services will experience a similar growth momentum as other sectors in the second half of the year.

“Given a broad-based recovery in global economy, we are expecting all of these sectors to perform better in 2017, hence contribute to higher growth.

“Technically, ancillary services will experience similar growth momentum as other sectors. Tourism sector is expected to register an encouraging growth in 2017,” he told Malay Mail Online.

While the services sector looks set to climb, it is the opposite for Malaysia’s once-booming manufacturing industry of the 1990s which has been hard hit by a global economic slowdown and other external factors for the past 10 years.

The slowdown across all markets had cut the output of factories here, resulting in more than a handful of multinational corporations (MNCs) across all subsectors shifting their manufacturing bases to rival emerging economies in the region like Thailand, Vietnam, Cambodia and China which offer comparatively cheaper labour.

Tobacco firms too are joining a wave of manufacturers leaving Malaysia, citing expensive labour costs here as one of the top reasons.

Other reasons given were the political nature of the business climate here.

The Federation of Malaysian Manufacturers said new government policies like the Employment Insurance Scheme and the Employer Mandatory Commitment made it harder for businesses to stay afloat.

But Firdaos, the economics, trade, and regional integration director at ISIS, said there may be more aggravating factors at stake.

“These companies may have had a weak business model or maybe their businesses were already bad when the slowdown started,” he said.

To make up for the manufacturing slack, the government has also started offering incentives to lure more services-based MNCs to operate here.

In the Greater Klang Valley that covers Kuala Lumpur, Selangor and Putrajaya, InvestKL is targeting to bring in 100 MNCs by 2020; it has succeeded to bring in 64 since 2011.

With the Najib administration shifting into high-gear to undertake its Transformasi Nasional 2050 (TN50) masterplan, Yeah predicts that Malaysia will soon have to embrace “Industry 4.0” as the future business model for all sectors.

“This will dominate the landscape towards TN50. Services such as e-commerce together with disruptive technologies will be the order of the day in all business models across all sectors by then,” Yeah, an economics professor at Sunway University said.

SERC’s Lee also said Industry 4.0 could revive the manufacturing sector by equipping it with cutting edge technology and innovation to increase its yield at reduced costs.

“Robotics, Artificial Intelligence and IOT as well as predictive analytics will be used to reduce lead time and production efficiency,” he said.

“This is very fundamental. The government must be able to take drastic steps to reform the education system to allow the transition to happen by then,” he said.

Industry 4.0 combines computers and automation, with the use of cyber-physical systems to monitor the physical process of a manufacturing factory.

Such factors, dubbed as a “smart factory”, will reduce human dependency and enable pure transparency in day-to-day operations.

But, reports indicate that data security and over dependency on computers could inherent challenges in achieving optimum operations.

While several nations have started looking at its pros and cons, Cincinnati Mayor John Carnely has proclaimed his state in the US as “Cincinnati to be Industry 4.0 Demonstration City”.