Will Hadi’s Bill resurface and why should we care?

PAS president Datuk Seri Abdul Hadi Awang's private member’s Bill — known as Hadi’s Bill — in its latest form now wants to increase the Shariah courts’ maximum sentencing limits to 30 years’ jail, RM100,000 fine and 100 strokes of the cane. — Picture by Saw Siow Feng
Follow us on Instagram, subscribe to our Telegram channel and browser alerts for the latest news you need to know.
By By Ida Lim

Although the Islamist party president’s private member’s Bill was tentatively listed on the Dewan Rakyat’s Order Paper for today, it remains to be seen if it will actually be listed.

If it does appear in the Order Paper, this will be the fifth Parliament meeting where it makes its appearance, showing just how long PAS (and the government, to a certain extent) have been playing a “will they, won’t they” game with citizens on the controversial Bill.

Known as “Hadi’s Bill” after its chief proponent, it has also been given the nickname of “RUU355”, as it is a Bill aimed at amending the Syariah Courts (Criminal Jurisdiction) Act 1965, or Act 355.

Hadi’s Bill in its latest form now wants to increase the Shariah courts’ maximum sentencing limits to 30 years’ jail, RM100,000 fine and 100 strokes of the cane.

This was after Hadi’s Bill appeared in the Dewan Rakyat’s Order Paper in four parliamentary meetings without going through the first reading or being debated, either due to lack of time or Hadi’s own requests twice for deferment. 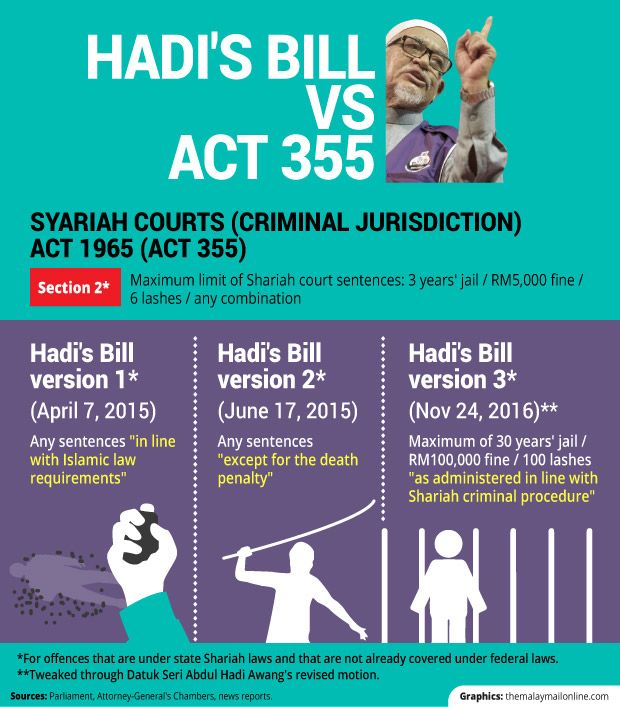 Since Hadi’s private member’s Bill is tucked under a parliamentary motion, it will arguably not become law automatically even if he manages to secure the required simple-majority vote from members of Parliament.

But the contents of Hadi’s Bill will likely be pursued by Putrajaya, as Prime Minister Datuk Seri Najib Razak had, at the Umno annual general assembly last year, said the federal government will eventually take over the Bill.

This should hardly come as a surprise as leaders from Umno have always been involved right from the very start and had even held a special briefing for all Muslim MPs just two days before Hadi presented his latest version of the Bill.

Despite PAS’ and Umno’s insistence that Hadi’s Bill is not about the harsh hudud punishments, PAS Dewan Ulama information chief Datuk Mohd Khairuddin Aman Razali had, last November, confirmed that it would allow the enforcement of three Shariah offences listed in state laws, namely premarital sex (100 lashes), “qazaf” or false accusation of adultery or sodomy (80 lashes), and drinking intoxicating drinks (40 to 80 lashes).

These three offences can be found under the hudud section of Kelantan’s Syariah Criminal Code (II) Enactment 1993, which covers all Muslims who are of sound mind and aged at least 18 and have committed an offence in Kelantan.

As PAS has yet to seek amendments to the Federal Constitution, Shariah courts will still be unable to enforce hudud punishments for three other Shariah offences under the same Kelantan Islamic penal code, including theft (amputation of right hand and left leg for first and second offences respectively, maximum 15 years’ jail for subsequent offences).

The two other Kelantan offences in the hudud category beyond the Shariah courts’ sentencing powers, even with Hadi’s latest Bill, are robbery (maximum five years’ jail or amputation of right hand and left leg or death penalty depending on severity of offence) and apostasy (death penalty and property seizure if no repentance).

Muslim folks in Terengganu may want to be on the lookout as well, as the state also has a Shariah law for hudud punishments.

PAS, Umno and other backers of Hadi’s Bill have repeatedly told non-Muslims to keep their nose out of the proposed legal changes which they assert will only affect Muslims, but the at-times conservative stance and increasingly expansionary bid for an Islamic veneer over virtually all aspects of Malaysians’ lives have made non-Muslims anxious and wary.

Some non-Muslims are embroiled in interfaith child custody disputes or caught by policies meant to protect the Muslim community such as halal certification and labelling, as seen in cases like the birthday cake rule adopted by a popular fast-food chain and seizures of unlabelled brushes made from pig bristles.

Hence, non-Muslim critics of Hadi’s Bill have voiced lingering concern over the wider implications of such legal changes amid an alleged push for Islamisation of the country.

Sharing the same concerns, some Muslims have spoken up against Hadi’s Bill — which they feel is a political tool that has nothing to do with religion or justice. The Muslim critics have also asserted that non-Muslims should have a say in the laws of a country shared together.

To travel back further in time and trace the evolution of PAS’s bid for hudud enforcement to harsher Shariah punishments, click here. 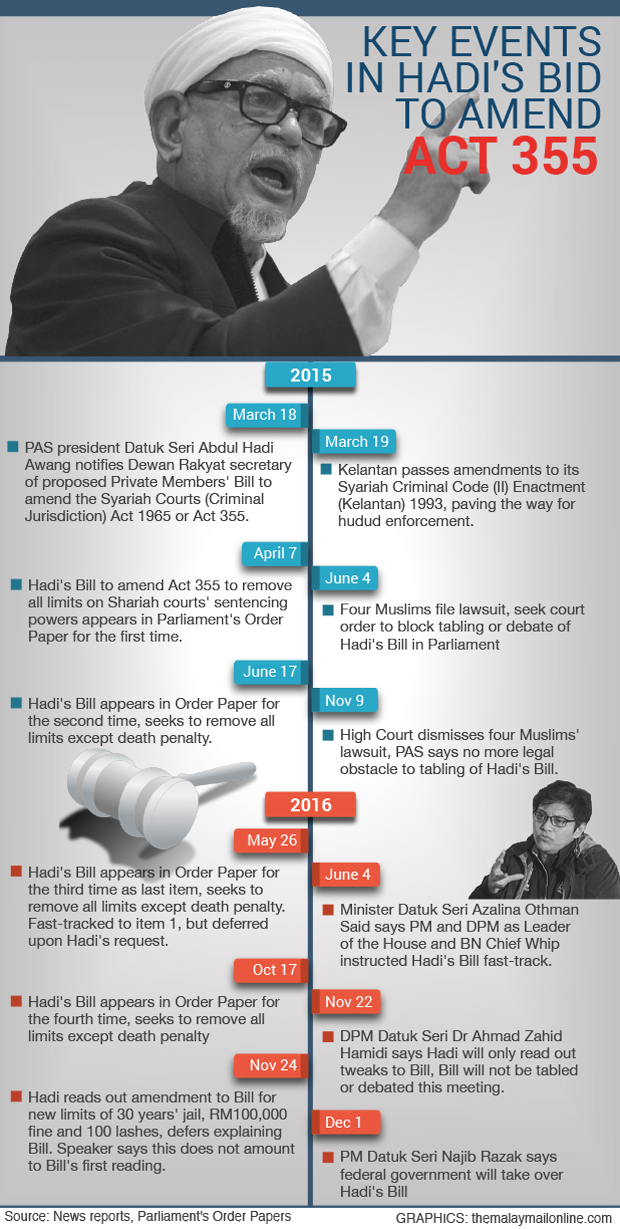