KUALA LUMPUR, Jan 4 — Doctors are proposing a countrywide health insurance system that would allow all Malaysians to visit any hospital, private or public, and eventually remove the distinction between the two.

They contend that the scheme would alleviate the burden at government hospitals which are being swamped now due to their low costs, while making private hospitals — currently shunned due to their prices — more accessible.

Additionally, it would also provide patients with greater rights to demand the level of service that they currently may not enjoy at government hospitals.

The system would entail a single-payer, multiple-provider arrangement where public and private institutions would functionally be the same to the patient.

“Having an insurance system based on a single-fund and single-payer system is the most efficient and economical system,” Tan Sri Dr Abu Bakar Suleiman, chairman of IHH Healthcare Berhad, the largest private hospital group in the Pan-Asian region, told Malay Mail Online in an email interview.

“Moving to a national system of health insurance provides greater stability in health financing, with coverage for all citizens. It is community-rated, not risk-rated, and excludes no one; contributions are decided based on ability to pay. There is pooling of risk and pooling of funding,” added the former Health Ministry (MoH) director-general, who served in the government from 1991 to 2001.

While acknowledging the technical proficiency and professionalism of public hospitals, Dr Abu Bakar said such a system would force both public and private providers to improve in terms of service, as they would essentially be competing on parity.

He suggested that the MoH oversee the purchasing of health services, which would be paid for from the common fund, in addition to the ministry’s other roles on policy, enforcement, and quality control. Private health insurance can be co-insurers for services not included in the national health insurance fund, but it is the insurance fund that decides on the co-payments and not the service provider.

The set-up could mean lower overall health care costs for the country, as a single-payer system would have far greater leverage in dictating prices to providers than multiple buyers in the current system comprising various government agencies, individual patients, and insurance companies, he added.

The tricky part about a social health insurance would be the rate contributed by Malaysian citizens; the universal nature of availability would also require a similarly ubiquitous contribution by the public.

When the MoH proposed a comparable system in 2012 — dubbed 1Care, but which also included set limits on doctor visits, and assigned GPs — there had been strong resistance to the purported rate of 10 per cent of gross income.

“More contribution, more benefits. Eight per cent will be argued to be too much, five per cent may provide inadequate benefits. Difficult and the politicians have to persuade voters to accept. What will you be willing to contribute?” said Dr Abu Bakar.

Although Malaysia has universal health care, the system is currently multiple-payer, multiple-provider, in which the public sector comprises payers like MoH, the Higher Education Ministry, the Social Security Organisation (Socso), other federal agencies, local authorities, other state agencies, state governments, the Ministry of Defence, and the Employees Provident Fund (EPF).

The complexity is compounded by an extensive private hospital network that is funded by households’ out-of-pocket spending, private insurance, corporations, private managed care organisations, and non-profits.

According to the preliminary data on the Malaysia National Health Accounts: Health Expenditure Report 1997-2015 by MoH, health expenditure in the country in 2015 totalled RM52.6 billion, where public and private sector spending were almost equivalent. Public sector expenditure accounted for 51 per cent (RM27.078 billion), slightly larger than 49 per cent by the private sector (RM25.531 billion). 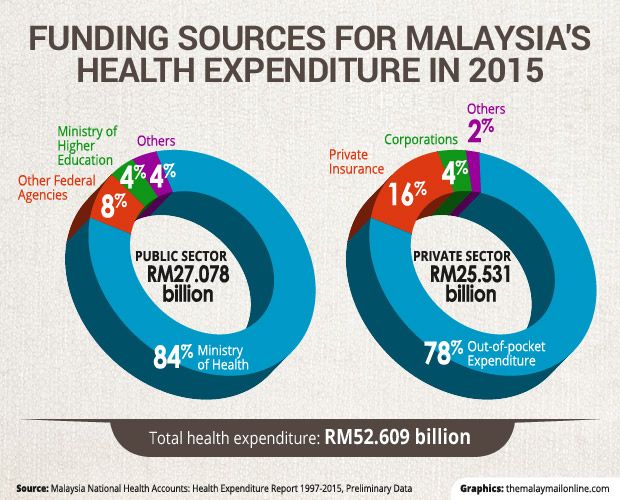 “The payer can set certain standards and insist of certain outcomes of care and this will promote competition amongst providers,” Dr Zaki Morad told Malay Mail Online.

“Value-based competition is now the major theme for healthcare providers. The NKF has advocated that the current fragmented funding for hemodialysis treatment by so many agencies be consolidated into one single payer,” he added.

Dr Zaki Morad said a fragmented health care system in which funding agencies do not have health care as their main business may have certain limitations, such as not being able to dictate the level of care or results that are expected.

He said the existing system — in which Socso, the Public Service Department (JPA), zakat authorities and other government agencies paid for hemodialysis — was also open to abuse such as duplicate claims by the same patient.

“There may be wastages if there is no central database to monitor payment. A single payer with multiple providers will improve outcomes as it can invest in activities monitoring quality,” he said.

“Patients still come to the private sector to top up because they find it better and easier. And they choose different hospitals depending on how competitive these hospitals are,” he said.

Can we trust a health care ‘EPF’?

The concern with a national health insurance fund is whether the government can run it well.

According to him, the advantages of a single dominant-payer system are lowered costs due to competition among health care providers and the ability to demand for better services from both the public and private sector, but the risk of a social health insurance model is an “incompetent, dishonest, unaccountable bureaucracy created to manage the fund.”

He said he was in favour of MoH retaining its safety net role instead, but urged Socso and JPA to own up to their health care financing responsibilities to their beneficiaries, like they currently do “selectively for dialysis, instead of conveniently sending them to MoH (which cannot turn down anybody).”

MoH must decide whether to be provider or regulator

He said, however, that one of the problems with a social health insurance is that less than 10 per cent of the Malaysian population pays income tax.

“You cannot ask the fellow who’s paying income tax to carry a lot of the burden for others,” Dr Lum told Malay Mail Online in an interview.

“So MoH has to decide -- what are we going to cover? And the MoH is in a very difficult position. On one hand it is a provider, on the other, it is a regulator. There is a lot of conflict of interest there,” he added. “MoH has to take a hard look at itself and decide what they want to be — regulator or provider.”

The former Malaysian Medical Association (MMA) president also said if there were to be any change in the health care financing model, MoH should not be the body collecting funds as they “know how to spend money only; it doesn’t know how to collect.”

Dr Lum pointed out that even private sector employers send their staff to MoH hospitals because of the cheap charges.

“For a start, you can charge private sector employers who send their staff to MoH facilities to at least recover their costs, that is assuming that MoH knows what’s their cost,” he said.

MMA president Dr John Chew said Malaysia must spend more on health beyond the overall 4.5 per cent of the GDP.

“Whether public or private, it is for the people to decide. At the moment, the split is 50:50. As private becomes more unaffordable, overcrowding in government hospitals is becoming a big problem,” Dr Chew told Malay Mail Online.

The Star reported Private Hospital Association Malaysia president Datuk Dr Jacob Thomas earlier this month as saying that patient volume in private hospitals has declined by 20 per cent to 30 per cent as more choose public hospitals.

When asked if there should be a more unified health care funding system, Dr Chew referred Malay Mail Online to the proposed 1Care in the early 2000s that had “floundered due to a trust deficit in the system.”

National newswire Bernama reported Health Minister Datuk Seri Dr S. Subramaniam as saying last July that the MoH was considering a government health insurance scheme, but it would be voluntary.