PUTRAJAYA, Dec 30 ― The Court of Appeal today reversed a lower court’s order quashing the unilateral conversion of M. Indira Gandhi’s three children to Islam, in a critical blow to the Hindu mother’s battle against her Muslim ex-spouse.

In a 2-1 decision today, the three-judge panel headed by Datuk Balia Yusof Haji Wahi also ruled that the civil courts have no jurisdiction over the Islamic matter, which it said was solely the purview of the Shariah courts.

“Having heard the submission from all parties and having considered the plethora of cases submitted before us, we are of the majority view in this court that, taking the subject matter approach, it is beyond the shadow of doubt that whether a person is Muslim or not falls strictly under the Shariah court.

“We accordingly allow the three appeals and we set aside the decision of the learned JC (Judicial Commisioner) and we make no order as to cost and for the deposits to be refunded,” Balia said reading the decision.

Indira had secured a Ipoh High Court order to quash the unilateral religious conversion of her three children in 2013, which the Perak Islamic Religious Department (JAIPk) and five others then appealed.

In his dissenting view, Hamid Sultan said that the matter was not the jurisdiction of any court, but a mistake that is legally void and made on the part of the religious authority concerned.

He said that for a non-Muslim child to utter the “kalimah syahadah” or Muslim declaration of faith, the minor must apply to the state religious department accompanied by a parent’s consent, which he said did not happen in the case of Indira’s three children.

“So what are the requirements? It is very simple... a person who is an adult must have an application and take the oath, kalimah syahadah, and if it’s a child, the child must make the application and the father must consent.

‘In this particular case, the father made the application and there is no provision for father to make the application, and kalimah syahadah was never taken by these children,” he said.

Hamid Sultan said the certificates of conversion issued were therefore null and void, and did not need deciding by either the civil or Shariah courts.

The court today also unanimously held that Indira's eldest daughter, Tevi Darsiny, who is now 18, was free to determine her faith as an adult.

Indira’s ex-husband, Muhammad Riduan Abdullah (formerly K. Pathmanathan), had in 2009 converted the couple’s three children — then aged 12 years old, 11 years old, and 11 months old — to Islam without their presence or Indira’s knowledge, just six days before he obtained a custody order for all three in the Shariah court on April 8, 2009.

He also snatched away the youngest child Prasana Diksa, now seven, about six years ago and has kept her away from Indira since.

The other remaining child, Karan Dinish, is now 17.

Outside the court today, Indira's lawyers, M. Kulasegaran and Aston Paiva, expressed their disappointment with the ruling, claiming that it could lead to added complexities in other cases involving unilateral conversion.

Aston said that the consequence of the ruling was to suggest that Indira would have to take her case to the Shariah Court, where she has no standing as a non-Muslim.

Kulasegaran expressed fear that children who are caught in similar situations would suffer in silence if critical issues in unilateral conversion cases are not addressed.

Kulasegaran said he will obtain further instructions from Indira on whether to pursue the matter to the Federal Court, but urged authorities to review ambiguous laws that gave rise to such cases.

The appellants in today’s case include Muhammad Riduan, the JAIPk director, the Federal Government as well as the Education Ministry which said it needed to determine if Indira's children should take moral or Islamic studies. 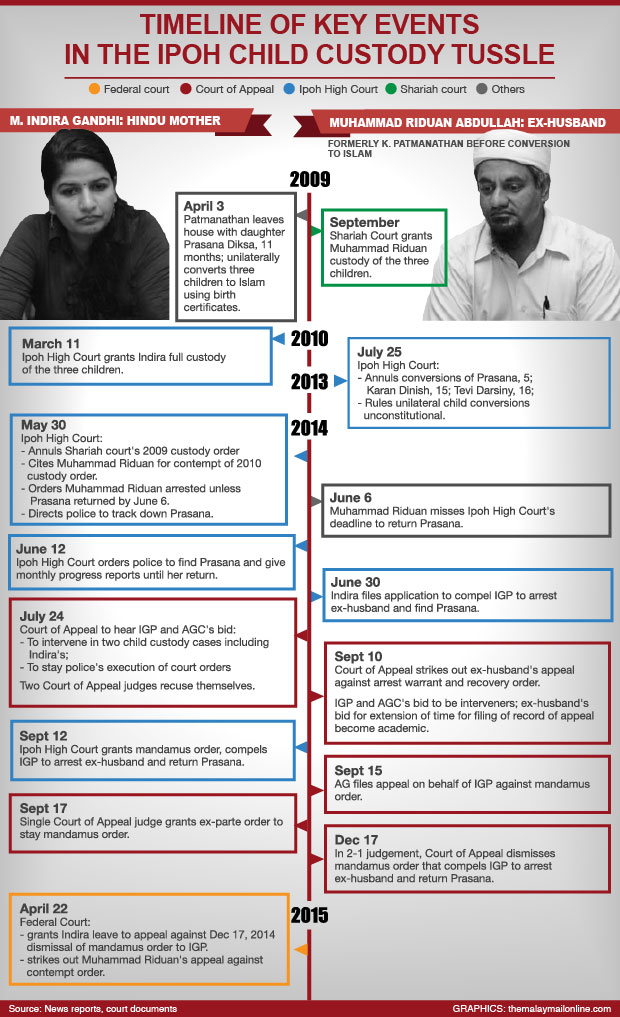