KUALA LUMPUR, Sept 19 — Slapped with a one year jail term for sedition today, Adam Adli Abdul Halim said there was “no turning back” for him in his joint campaign with other activists to push for the repeal of the Sedition Act 1948.

The 25-year-old law student is appealing his conviction, but said he was not fearful of the jail sentence as he had a good team of lawyers and others who were committed to push for the repeal of the Sedition Act.

“I’ve never been alone in this struggle so there’s no need for me to be afraid.

“Jail sentence is nothing compared to being taken away our freedom of speech,” Adam Adli calmly told reporters after he was released on a bail of RM5,000.

He expressed his worry that more Malaysians will be arrested and charged under the Sedition Act, also claiming that the one-year jail sentence today proved that the colonial-era law was being used “to punish those with differing opinions”.

“I think this is a form of intimidation and misstep by the government that is trying to show more state power on the citizens,” he said.

He said the sedition conviction and jail sentence today will further fuel his “struggle” to see the Sedition Act repealed, adding that he will continue to be part of pressure groups Gerakan Hapus Akta Hasutan (GHAH) and Gerakan Anak Muda Hapuskan Akta Hasutan (Hasut) against the law.

“I believe this is a very important matter due to be tackled by all of us especially in the struggle of opening up democratic space in Malaysia,” he said.

Adam Adli, who was wearing a white shirt with a dark blue ribbon on it, was accompanied by his parents.

Adam Adli later told Malay Mail Online that he was wearing the ribbon as a sign of protest against the Sedition Act and to show support for the upholding of academic freedom following the prosecution of law lecturer Dr Azmi Sharom under the same law.

Azmi, an associate professor at Universiti of Malaya, was charged earlier this month over his academic opinion on the 2009 Perak constitutional crisis.

Adam was charged on May 23 for his May 13 remarks allegedly inciting the public to overthrow the government through street protests during a forum shortly after the May 5 general election which saw Barisan Nasional retain power narrowly.

For first-time offenders like Adam, a conviction under Section 4 (1)(b) of the Sedition Act 1948 carries a maximum jail term of three years or a maximum fine of up to RM5,000 or both.

Two others were convicted under the Sedition Act this year, with the late DAP politician and senior lawyer Karpal Singh fined RM4,000 while activist Muhammad Safwan Anang was sentenced to 10-months’ jail on September 5.

Putrajaya has come under heavy public scrutiny for its recent sedition crackdown, which has seen at least 20 anti-government dissidents, opposition politicians and a journalist booked in the space of one month.

A government spokesman recently said the law was expected to be repealed by the end of next year, but Najib has indicated that it would not be abolished if replacement laws are inferior. 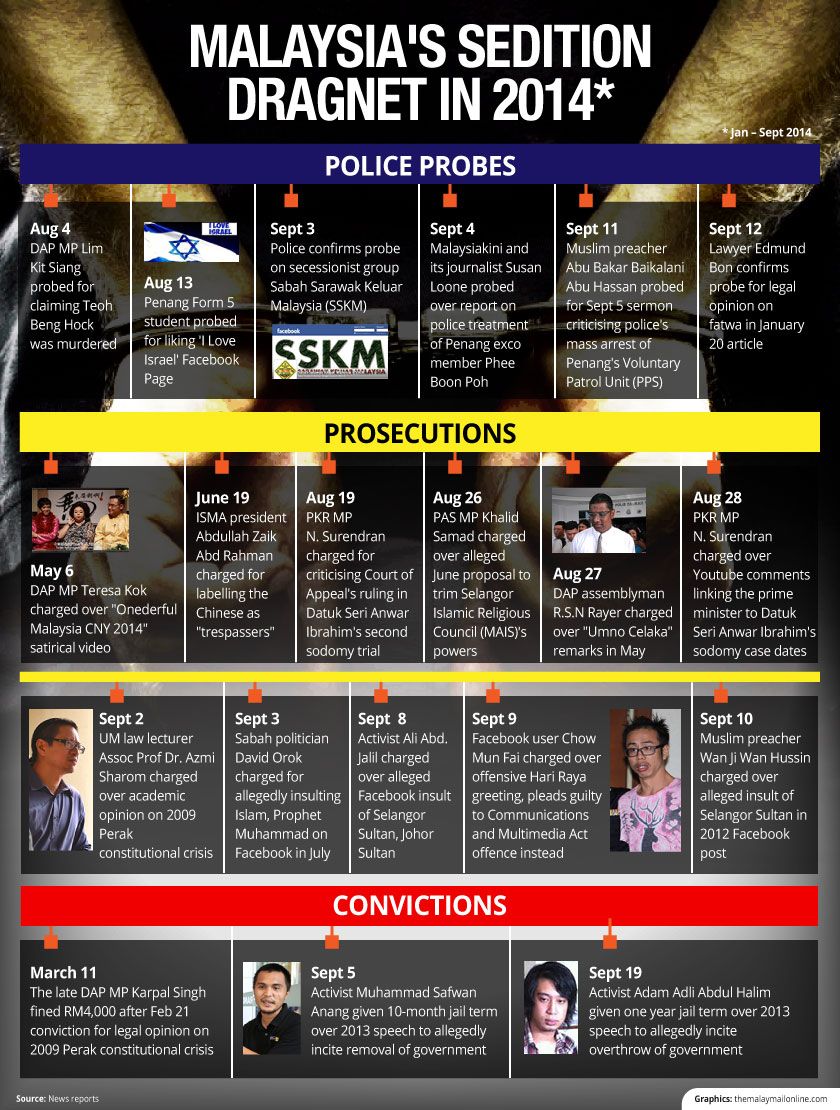