KUALA LUMPUR, March 12 — Malaysia, aspiring to become a developed nation in six years, is finding that more than 50 years under one coalition and tight control over information is a mismatch for handling a rapidly growing crisis followed across the world.

China is calling on Malaysia to be more transparent as Prime Minister Datuk Seri Najib Razak lets his cousin, Acting Transport Minister Datuk Seri Hishammuddin Hussein, be the face of the investigation into why a Malaysian Airline System Bhd. plane vanished on March 8. It was en route to Beijing with 239 people on board. Investigators from at least nine countries are trying to locate the jet.

Najib’s United Malays National Organisation leads the coalition governing the Southeast Asian nation. Only in recent years has it seen a move toward competitive elections, in some districts, that put a premium on public speaking. The government’s lack of a clear message, compounded by a series of false leads on the plane’s whereabouts and questions on coordination, risks undermining its image internationally.

“They’re handling a huge global issue as if it was domestic politics,” said Clive Kessler, Emeritus Professor of Sociology and Anthropology at the University of New South Wales in Sydney, who has analysed the nation’s politics for half a century. 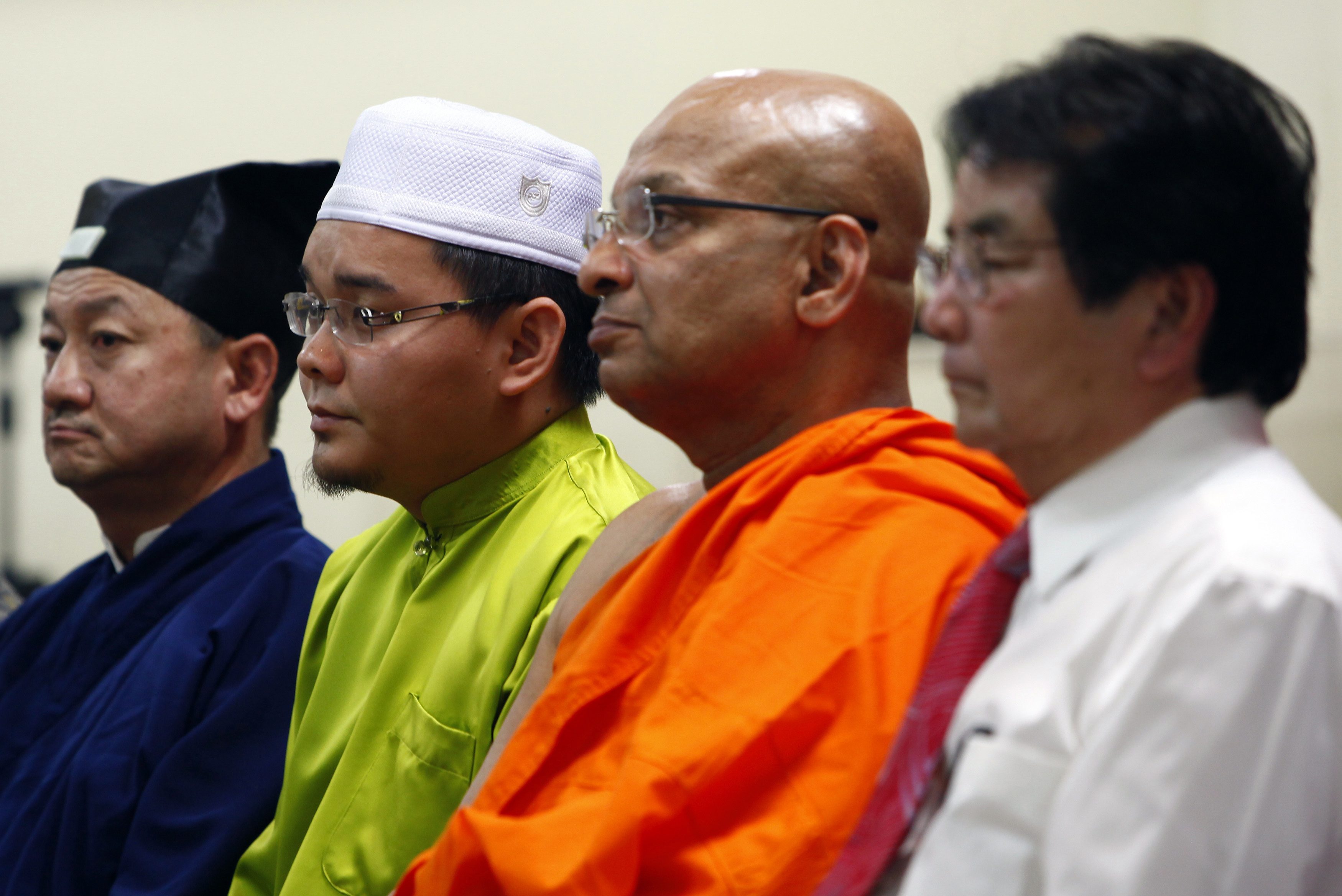 Representatives from the Taoist, Muslim and Buddhist religions sit next to Minister in the Prime Minister’s Department Tan Sri Joseph Kurup during an interfaith prayer called ‘Hope’ for the passengers and crew of the missing Malaysia Airlines flight MH370 at a Buddhist temple in Kuala Lumpur March 12, 2014. — Reuters pic 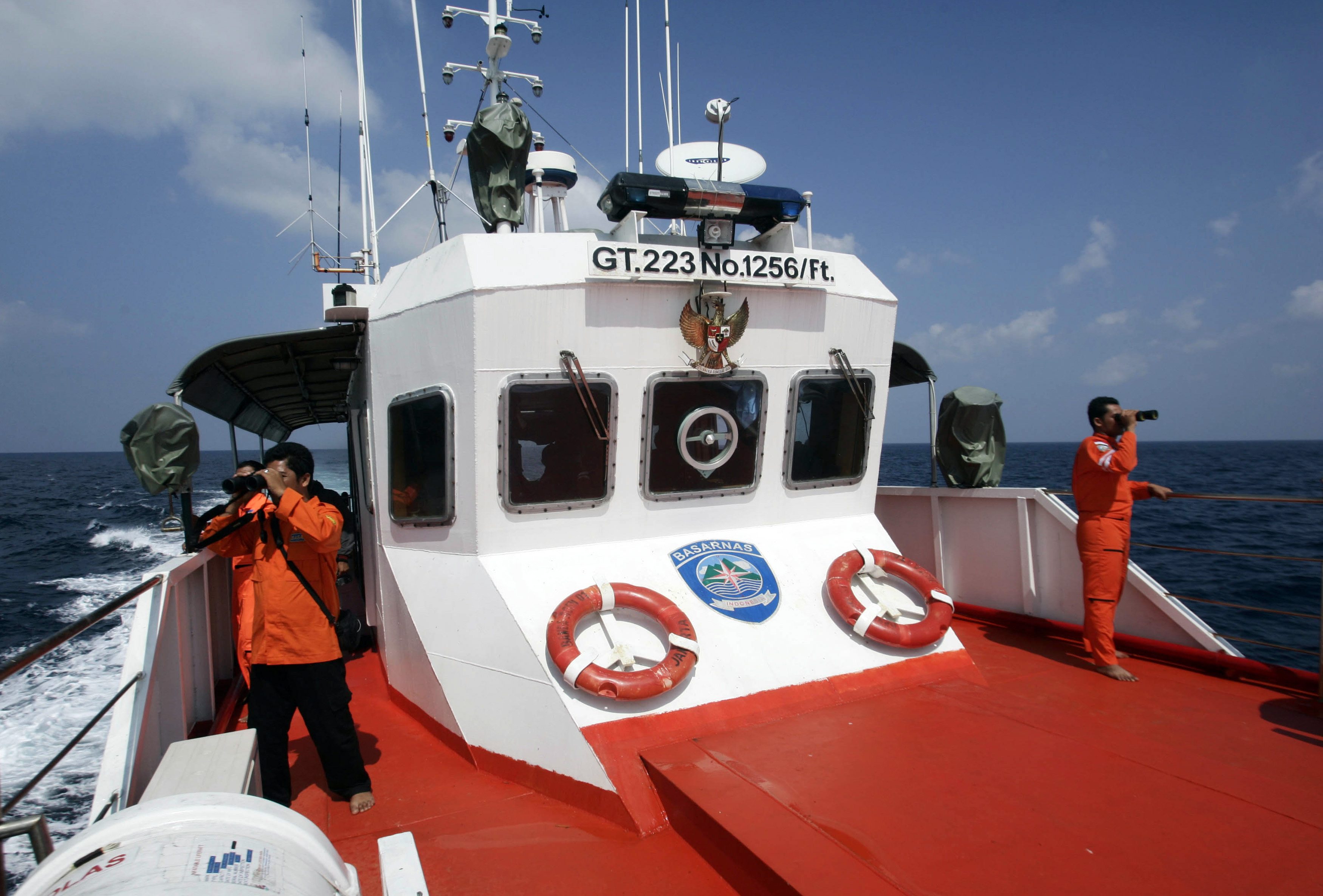 Members of a Search and Rescue ship use binoculars to look for the missing Malaysia Airlines flight MH370, that disappeared from radar screens in the early hours of Saturday, in the Straits of Malacca March 12, 2014. — Reuters pic 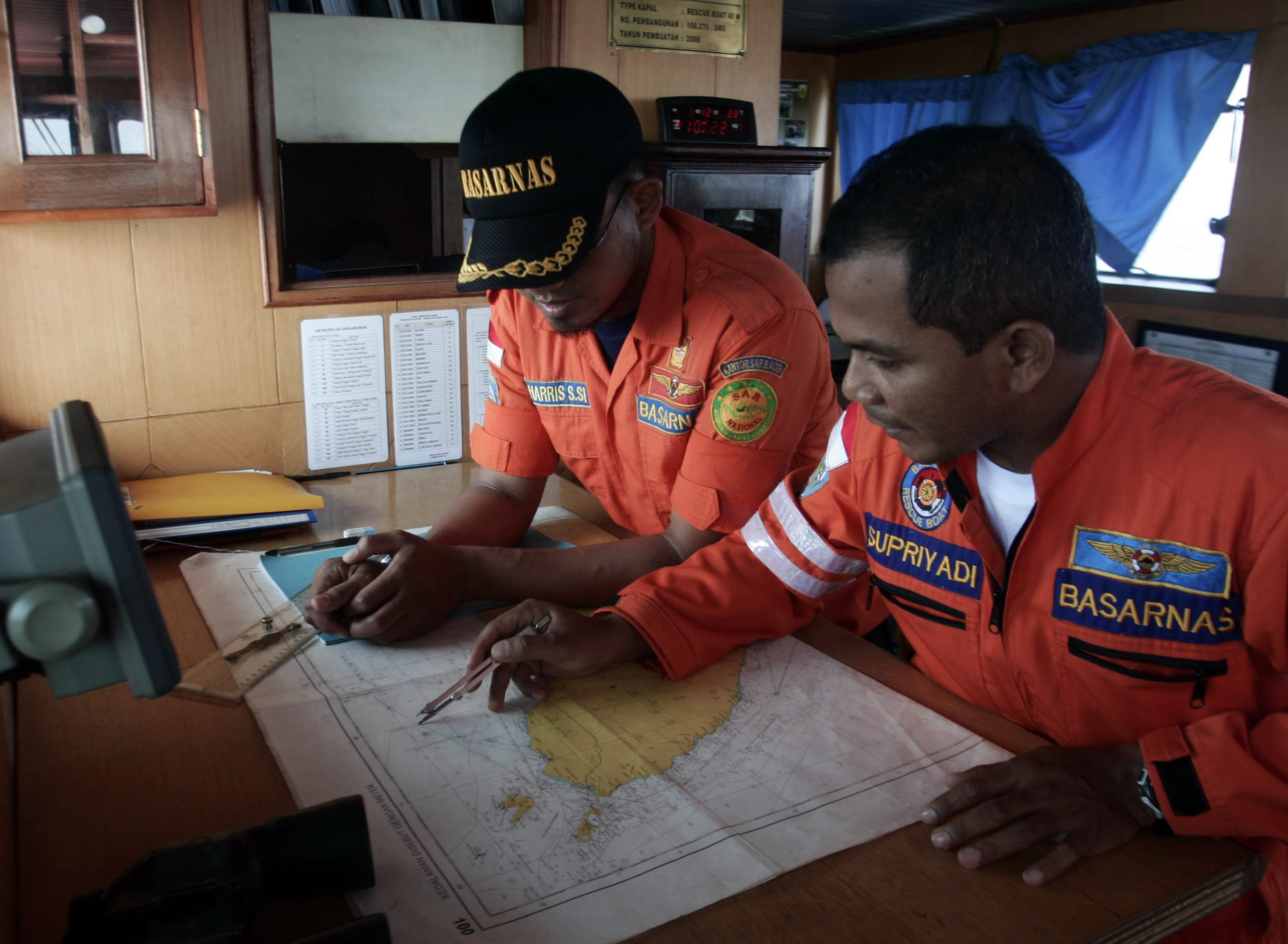 Members of a Search and Rescue ship look at a map of the Straits of Malacca as they hunt for the missing Malaysia Airlines flight MH370, that disappeared from radar screens in the early hours of Saturday, in the Malacca Strait March 12, 2014. — Reuters pic 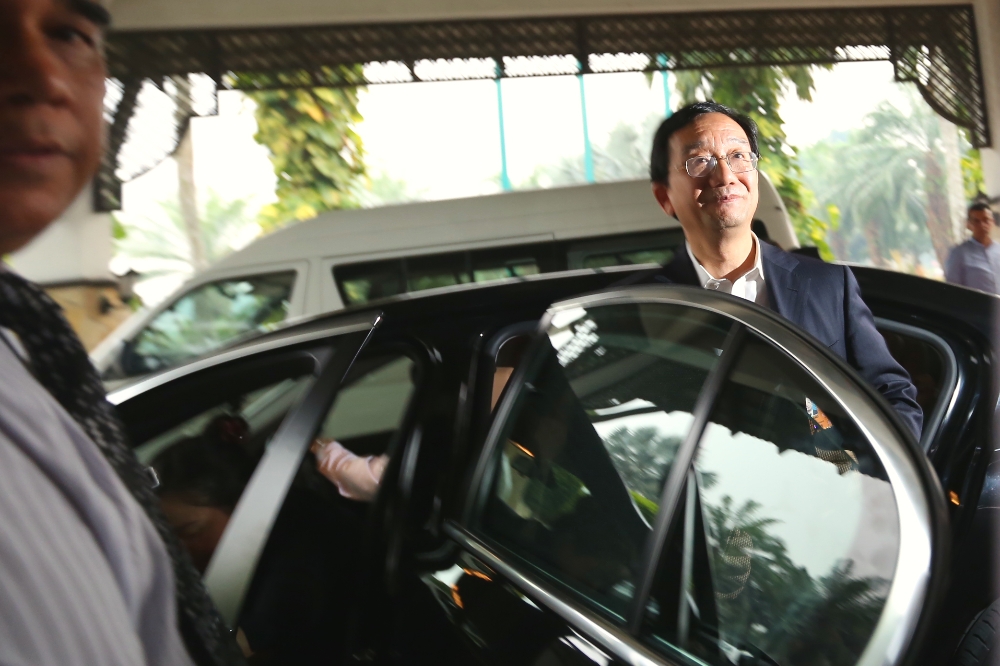 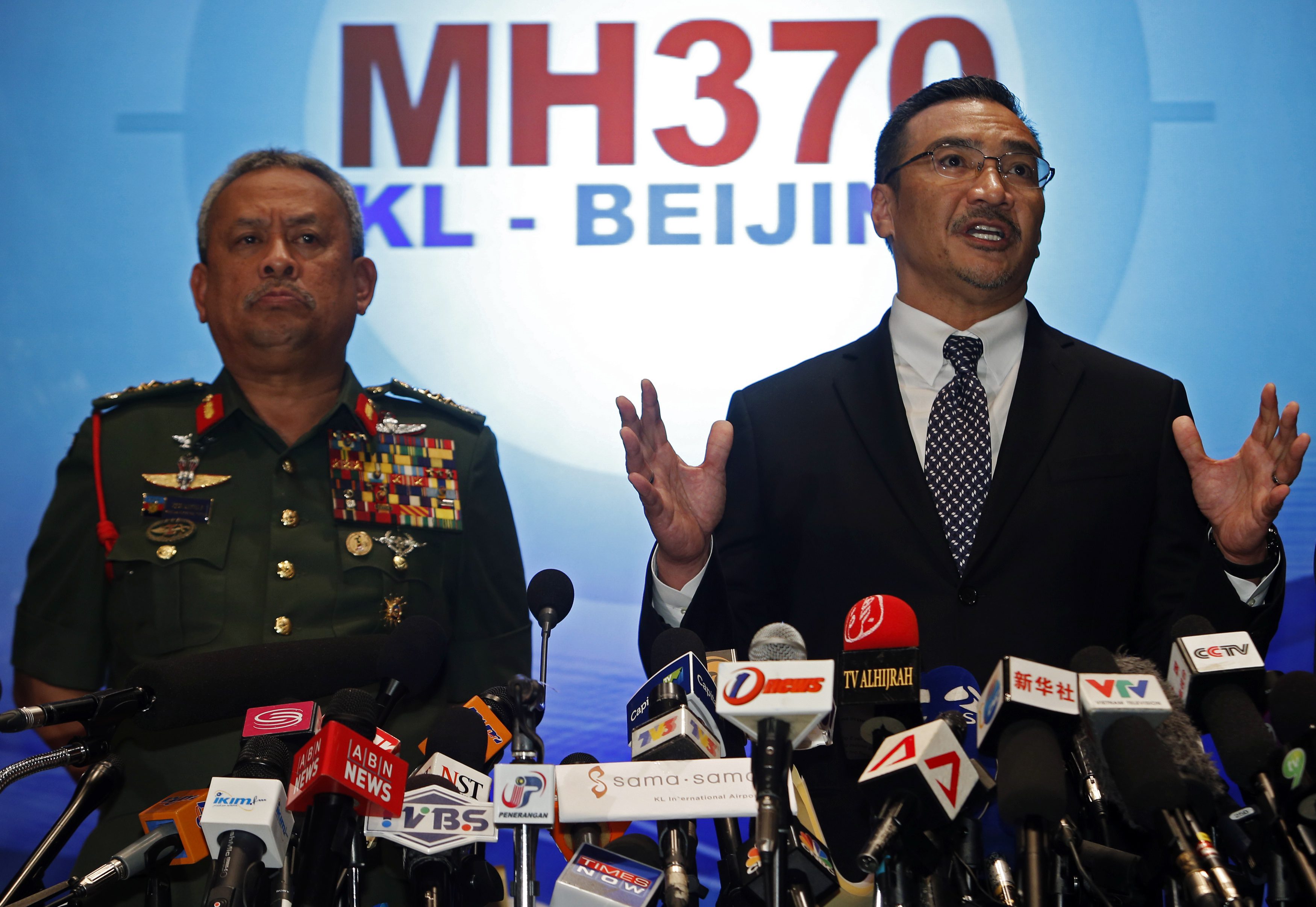 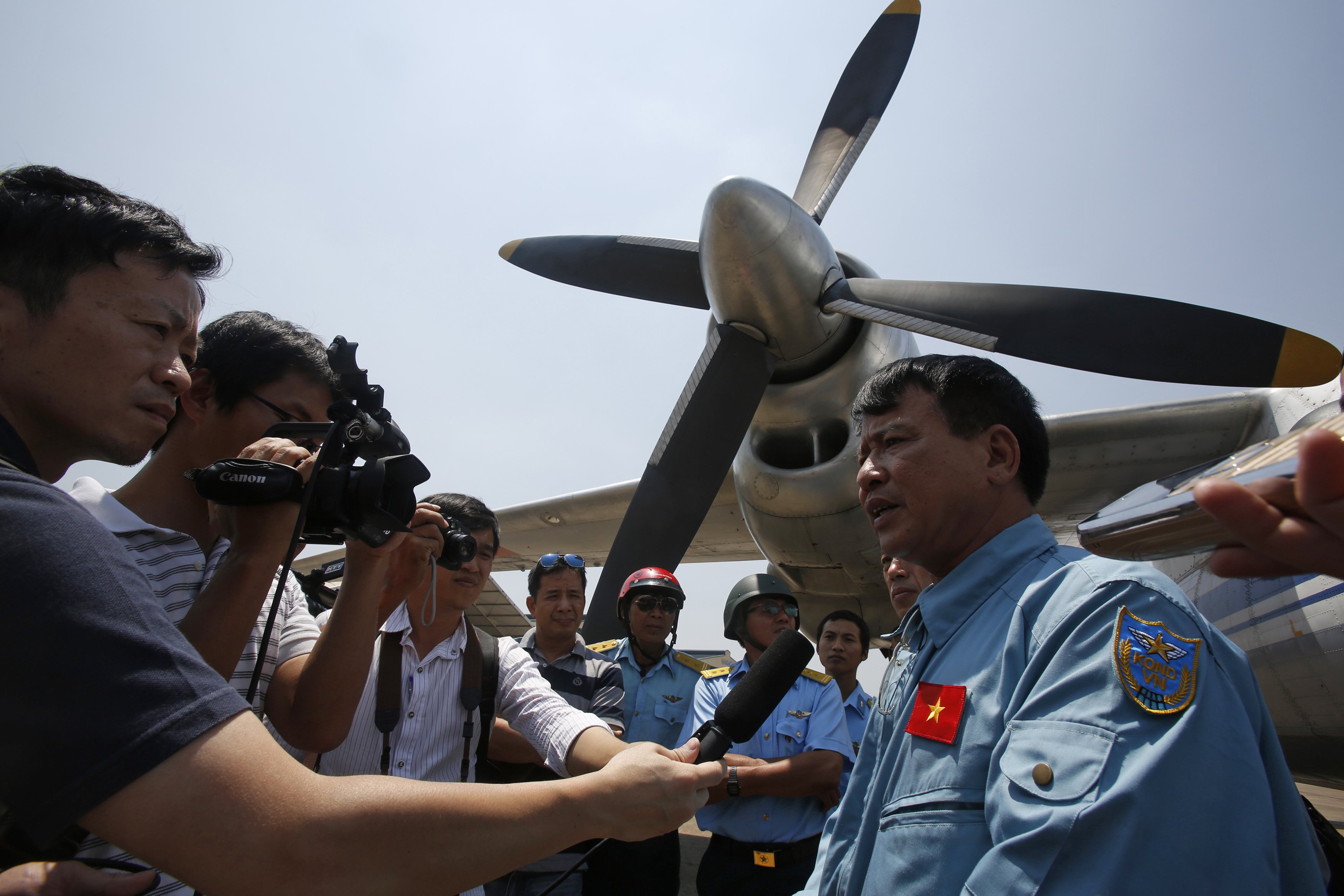 Deputy Commander of Vietnam 918 Air Brigade Senior Lieutenant Nguyen Tri Thuc speaks with the media after a mission to find the missing Malaysia Airlines flight MH370, that disappeared from radar screens in the early hours of Saturday, at a military airport in Ho Chi Minh City March 12, 2014. — Reuters pic 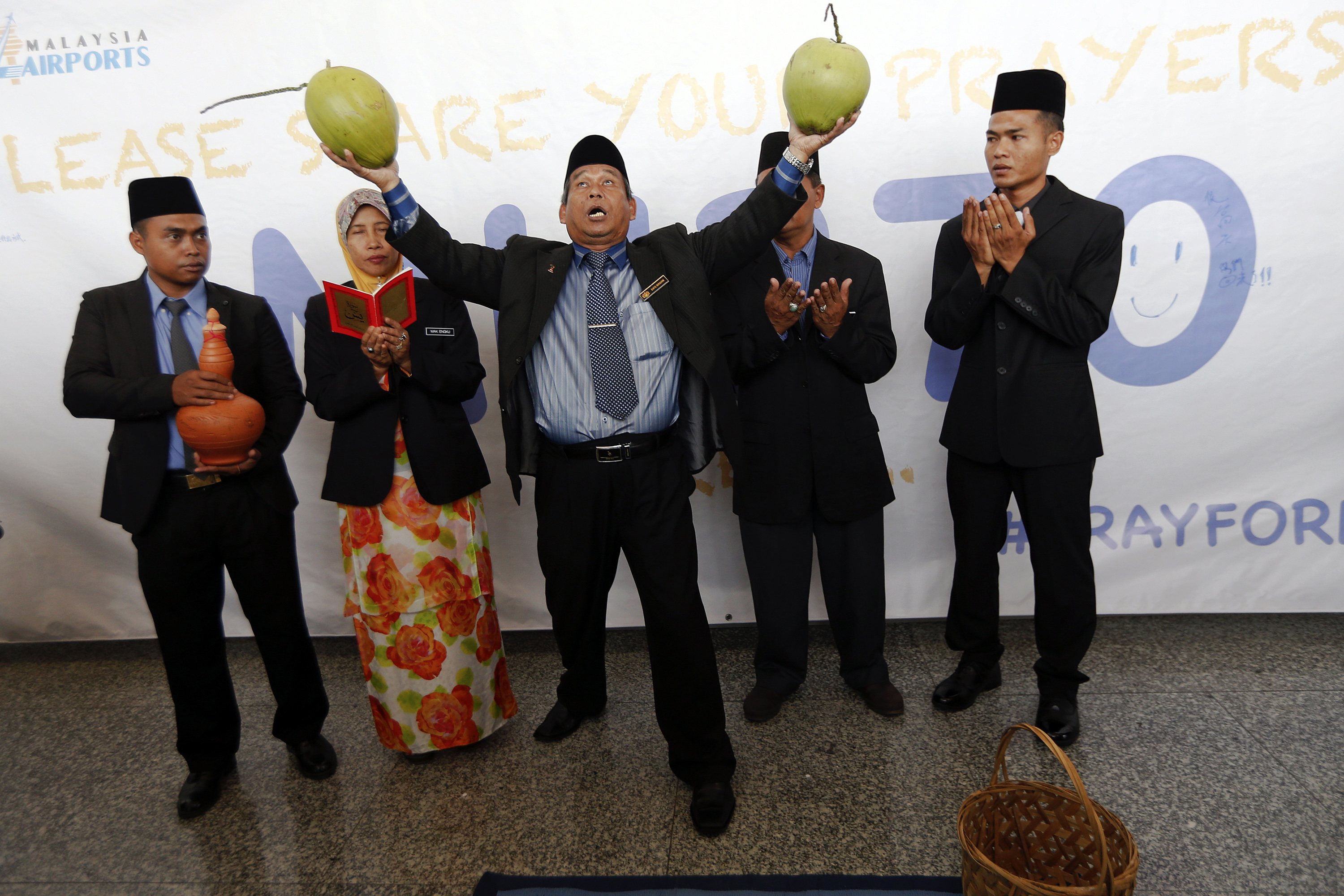 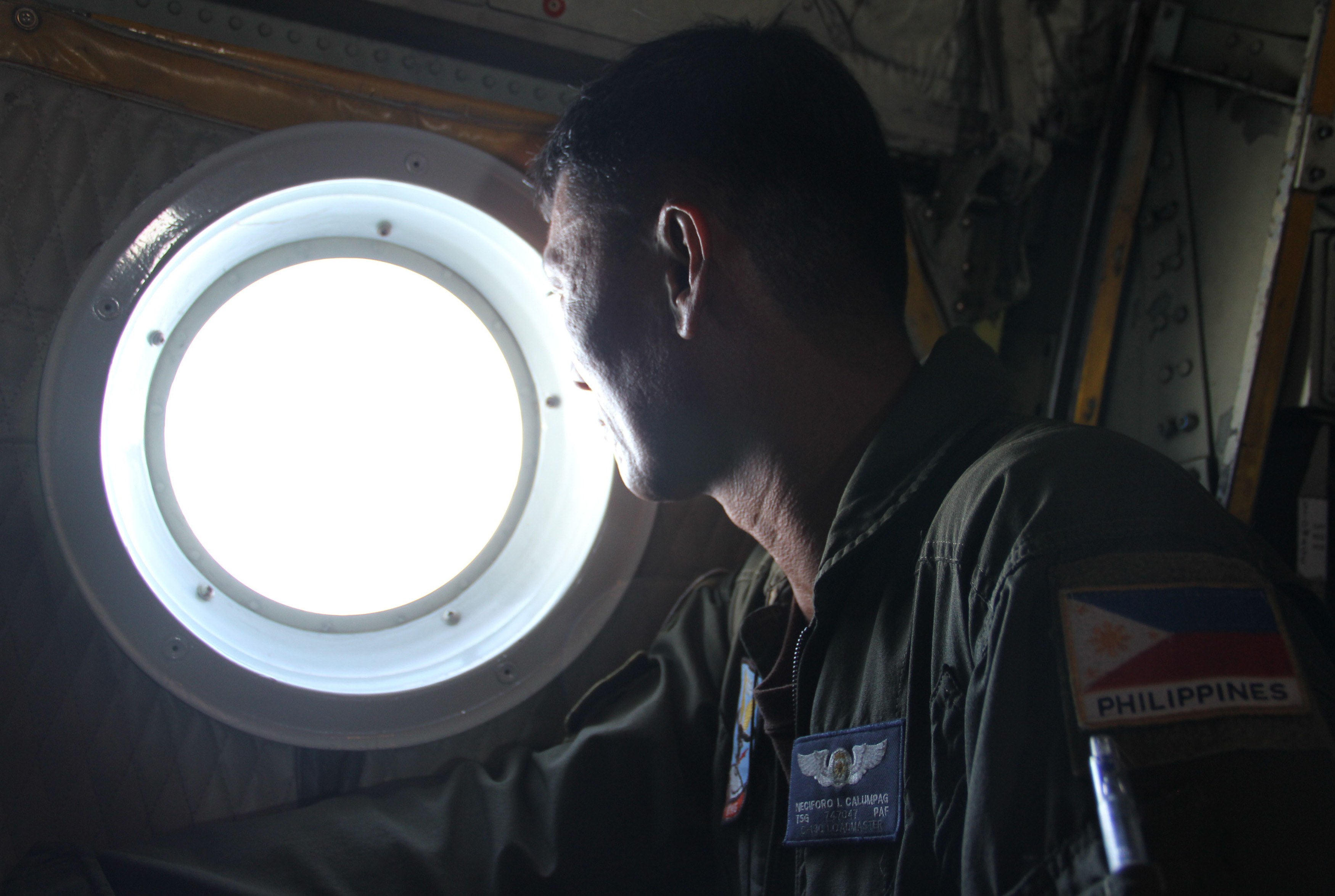 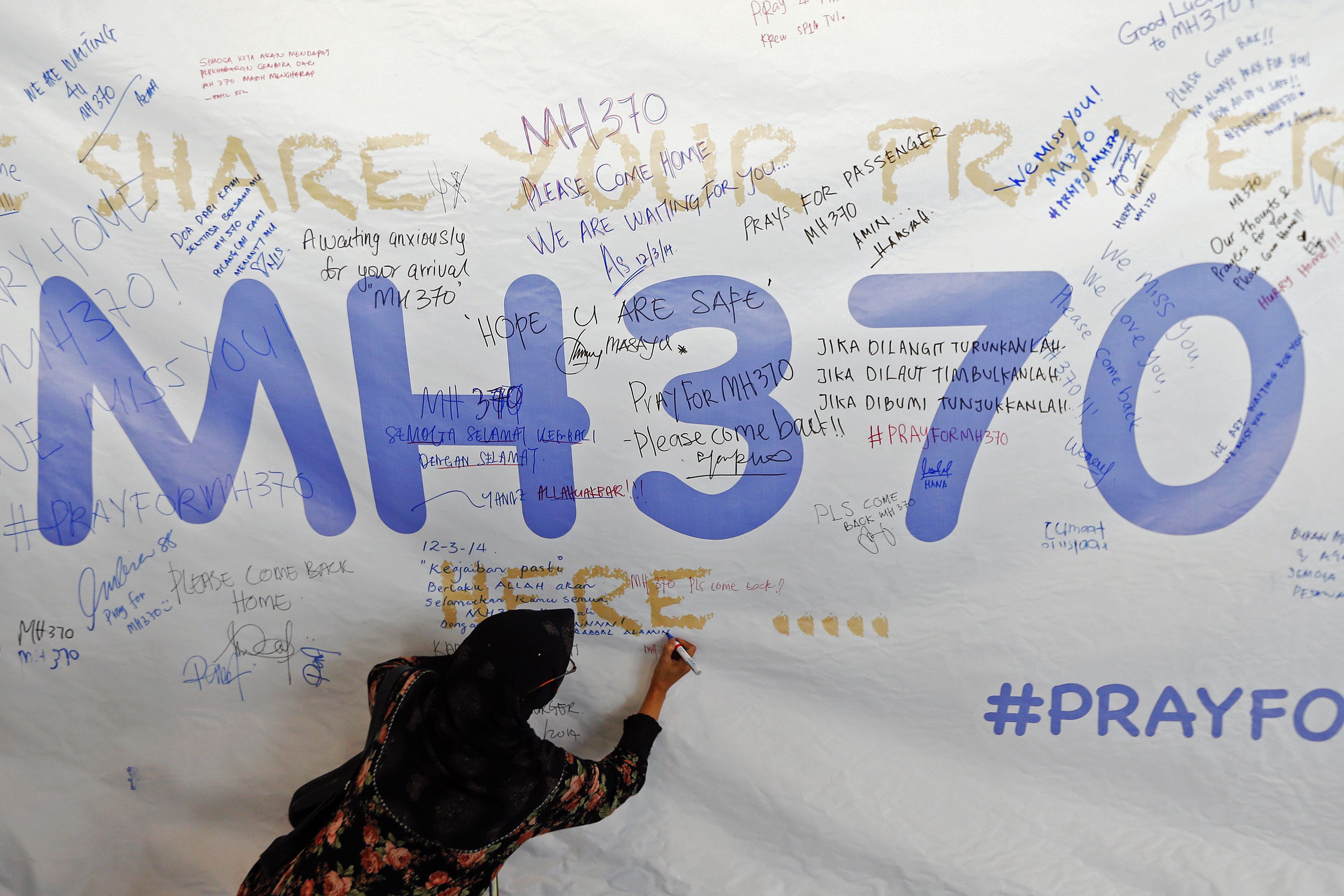 A woman writes a message of support and hope for the passengers of the missing Malaysia Airlines MH370 on a banner at Kuala Lumpur International Airport, March 12, 2014. ― Reuters pic 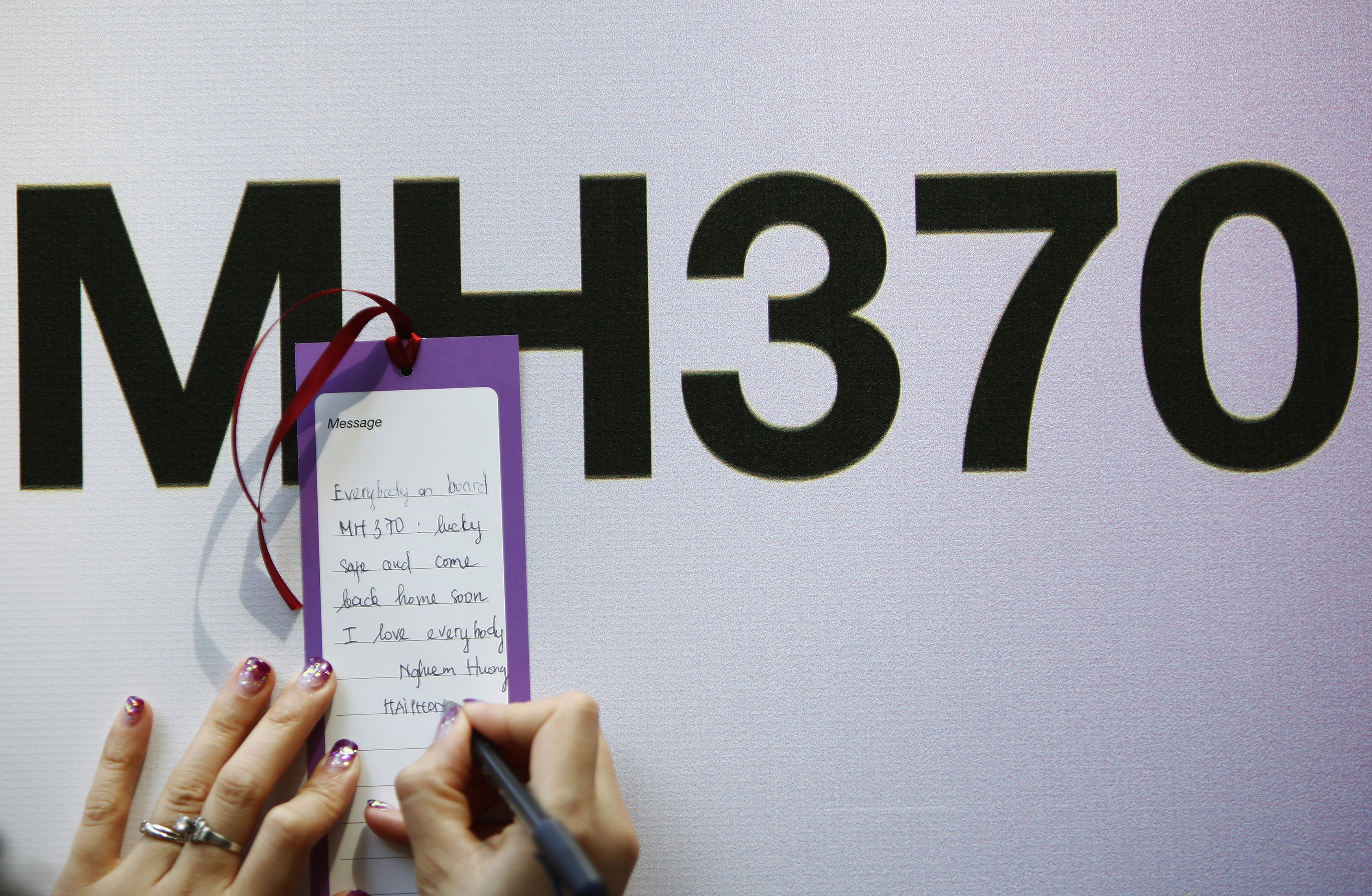 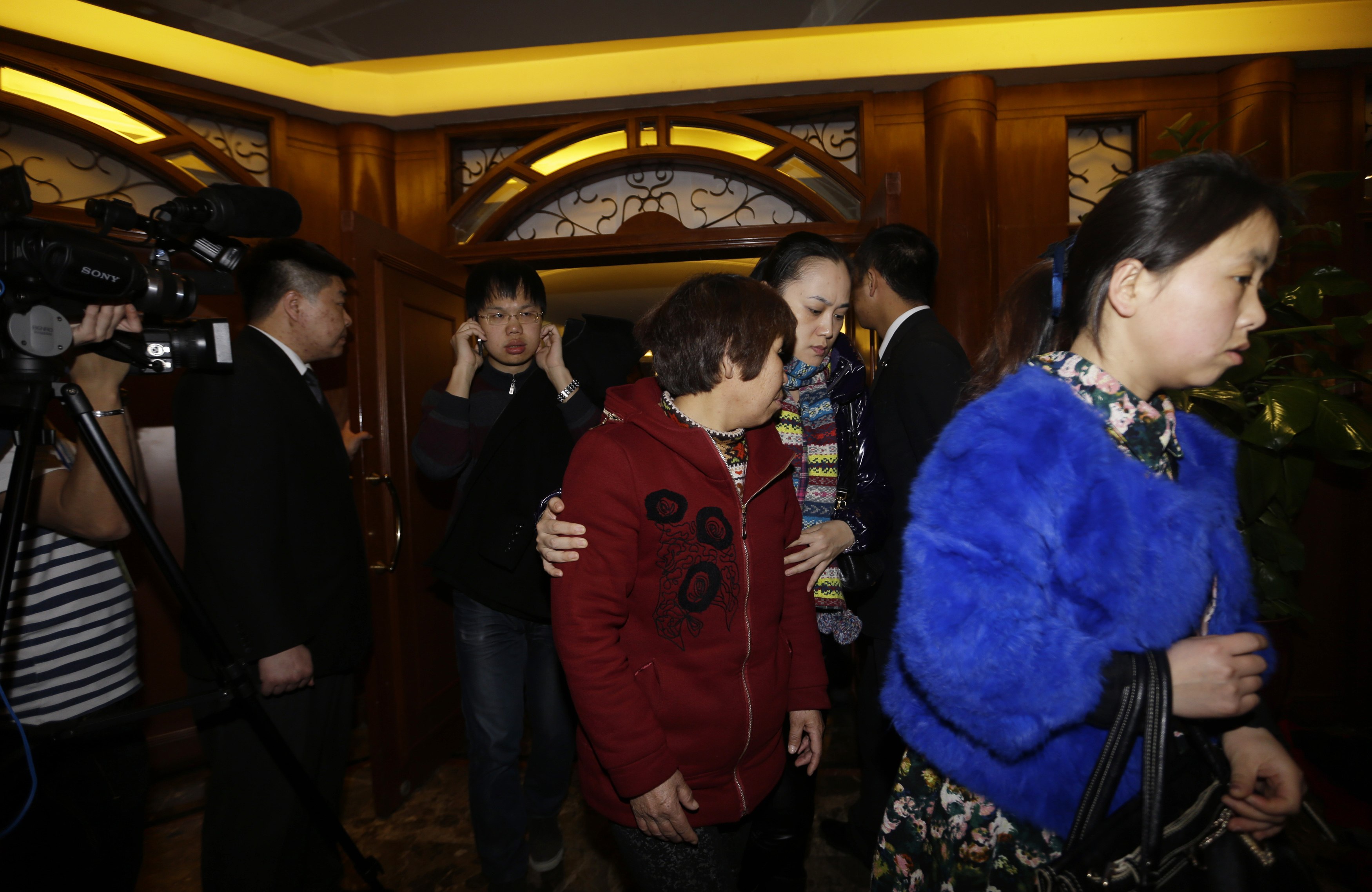 A family member of a passenger on the missing Malaysia Airlines MH370 plane cries as she enters a hotel where family members of those aboard the flight are being put up, in Putrajaya, March 12, 2014. ― Reuters pic 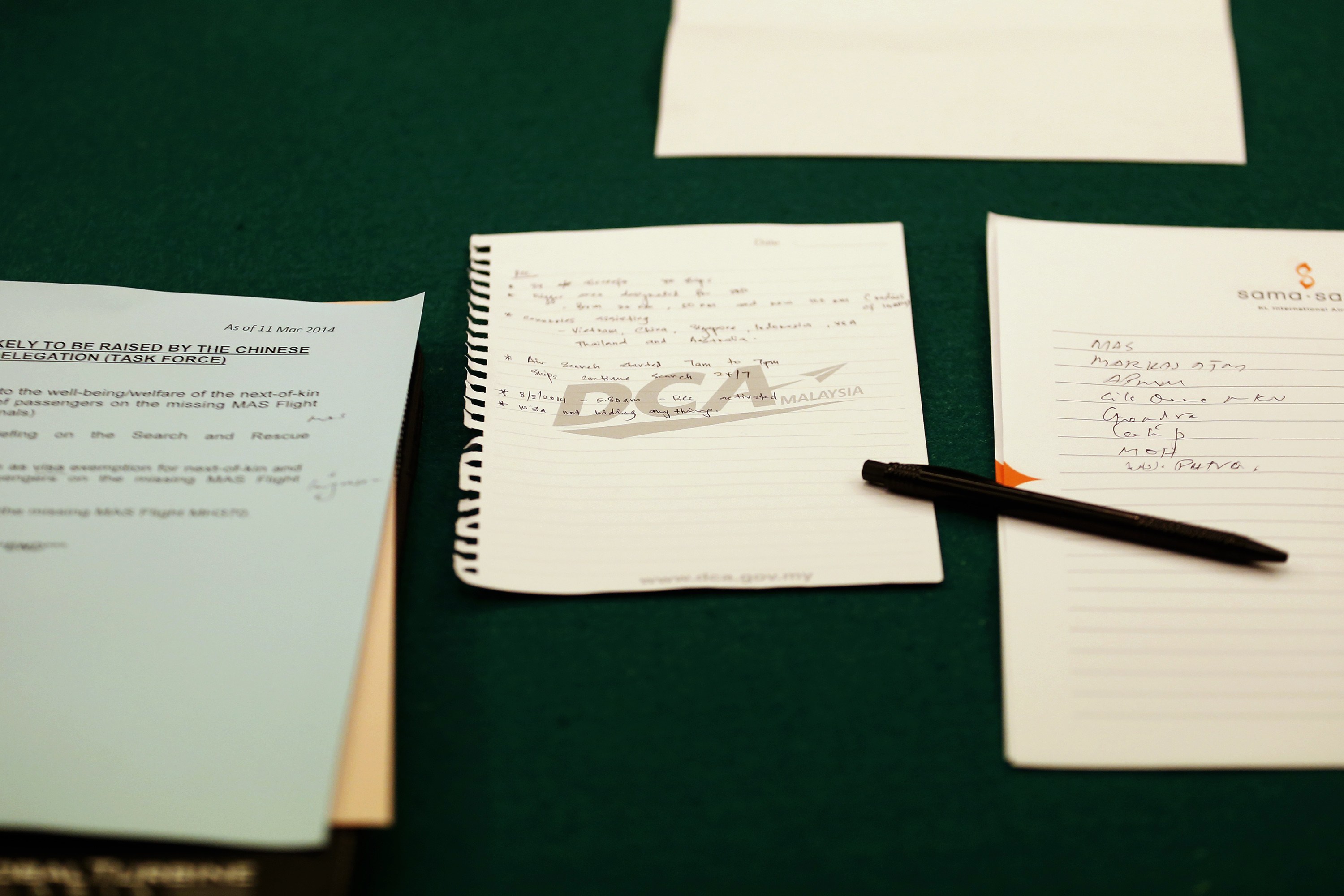 Notes from a meeting with officials of Malaysia’s Department of Civil Aviation and the Chinese joint working group after the disappearance of Malaysia Airlines flight MH370, at a hotel at the Kuala Lumpur International Airport, March 12, 2014. 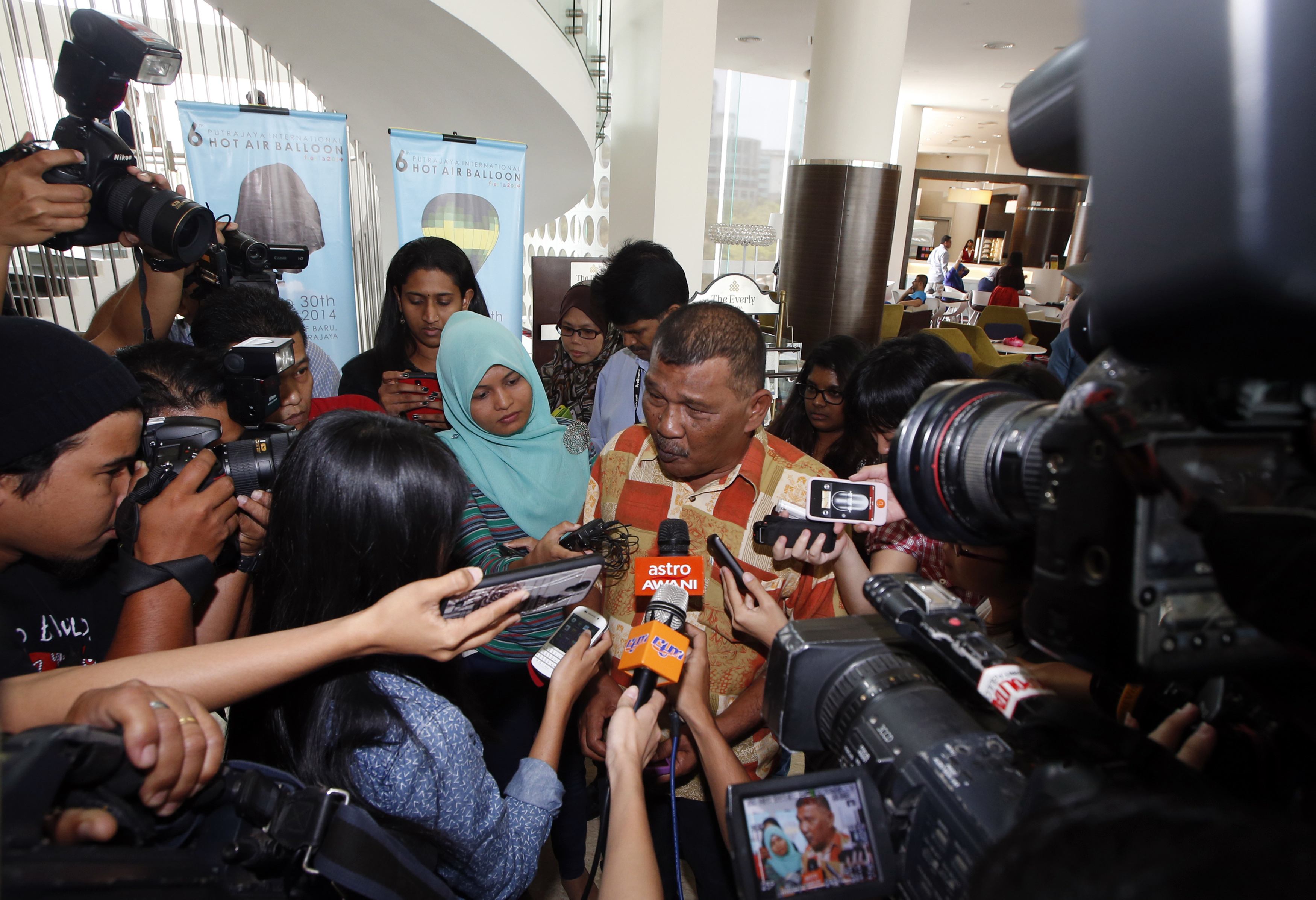 Zamani Zakaria, 56, the father of a passenger on the missing Malaysia Airlines MH370 plane, speaks to journalists at a hotel where family members of those aboard the flight are being put up, in Putrajaya, March 12, 2014. ― Reuters pic 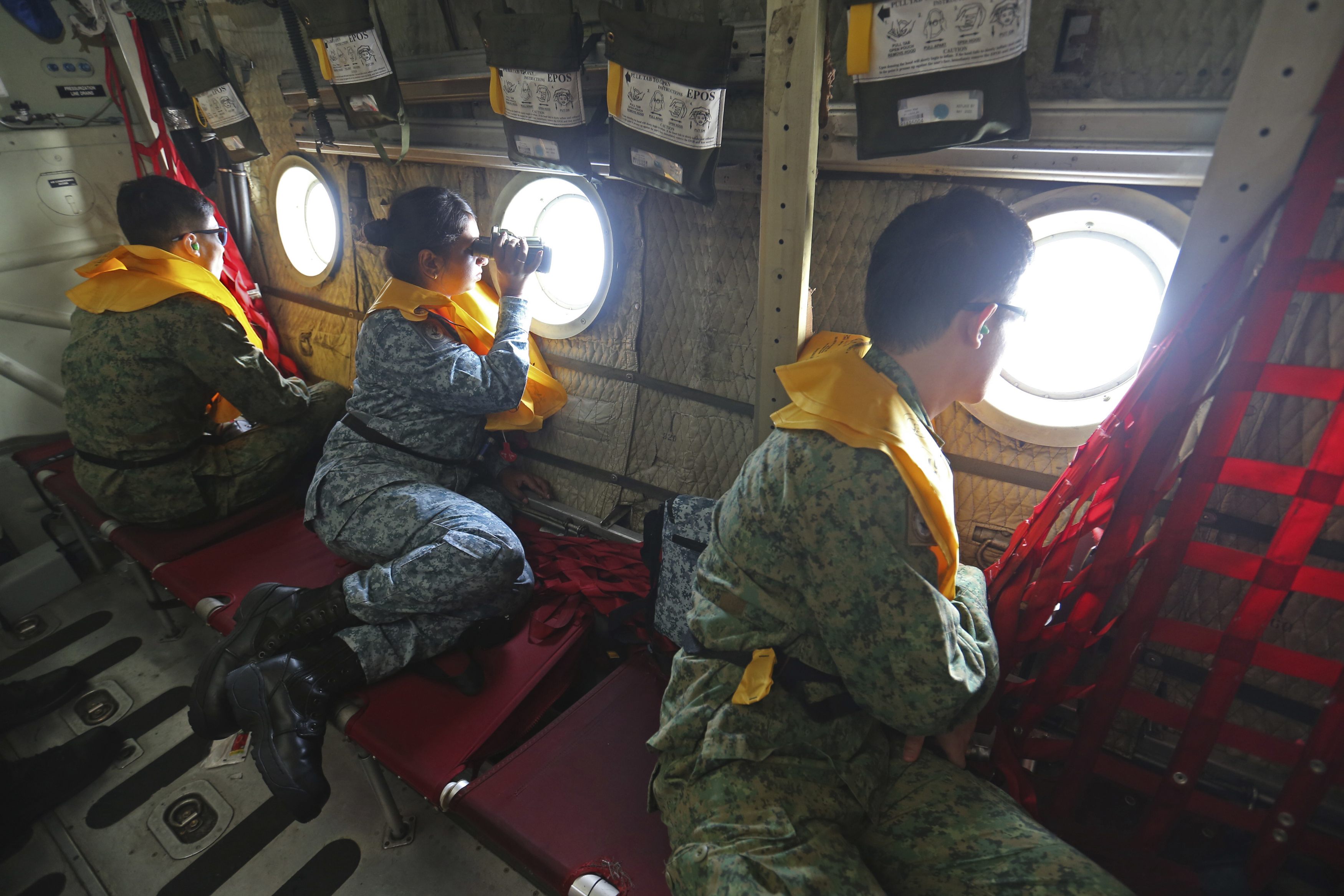 Military personnel look out of a Republic of Singapore Air Force (RSAF) C130 transport plane as they search for the missing Malaysia Airlines MH370 plane over the South China Sea, March 12, 2014. ― Reuters pic 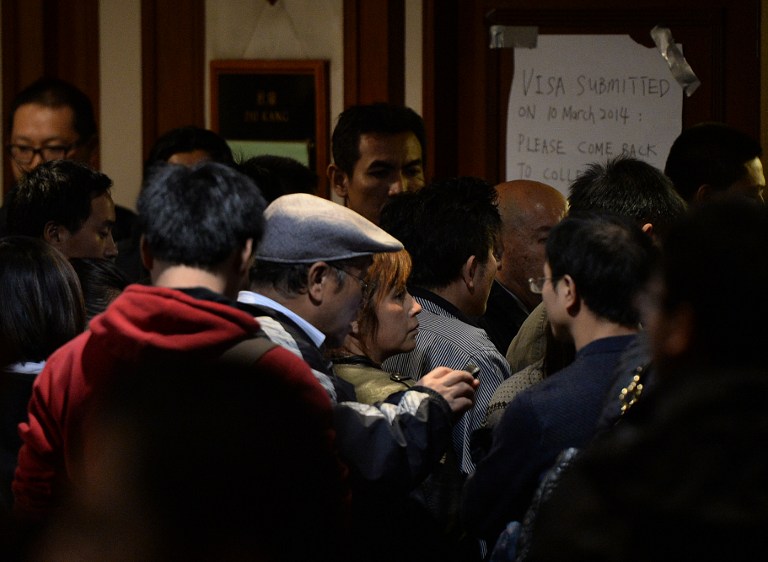 Relatives of passengers from the missing Malaysia Airlines Boeing 777-200 plane pick up their Malaysian visas at the Metro Park Lido Hotel in Beijing on March 12, 2014. ― AFP pic 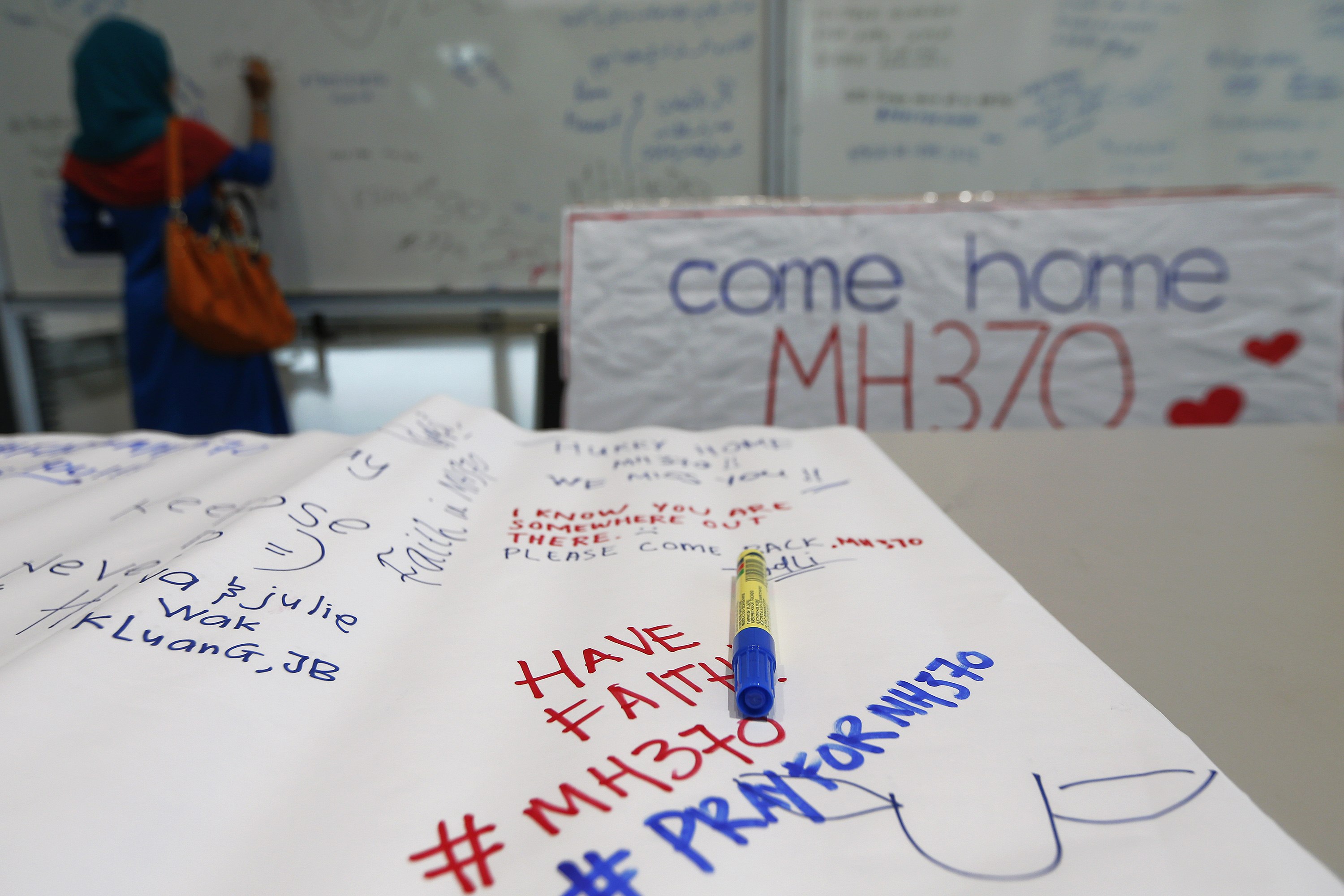 A woman writes messages of support and hope for the passengers of the missing Malaysia Airlines flight MH370 at the Kuala Lumpur International Airport, March 12, 2014. ― Reuters pic 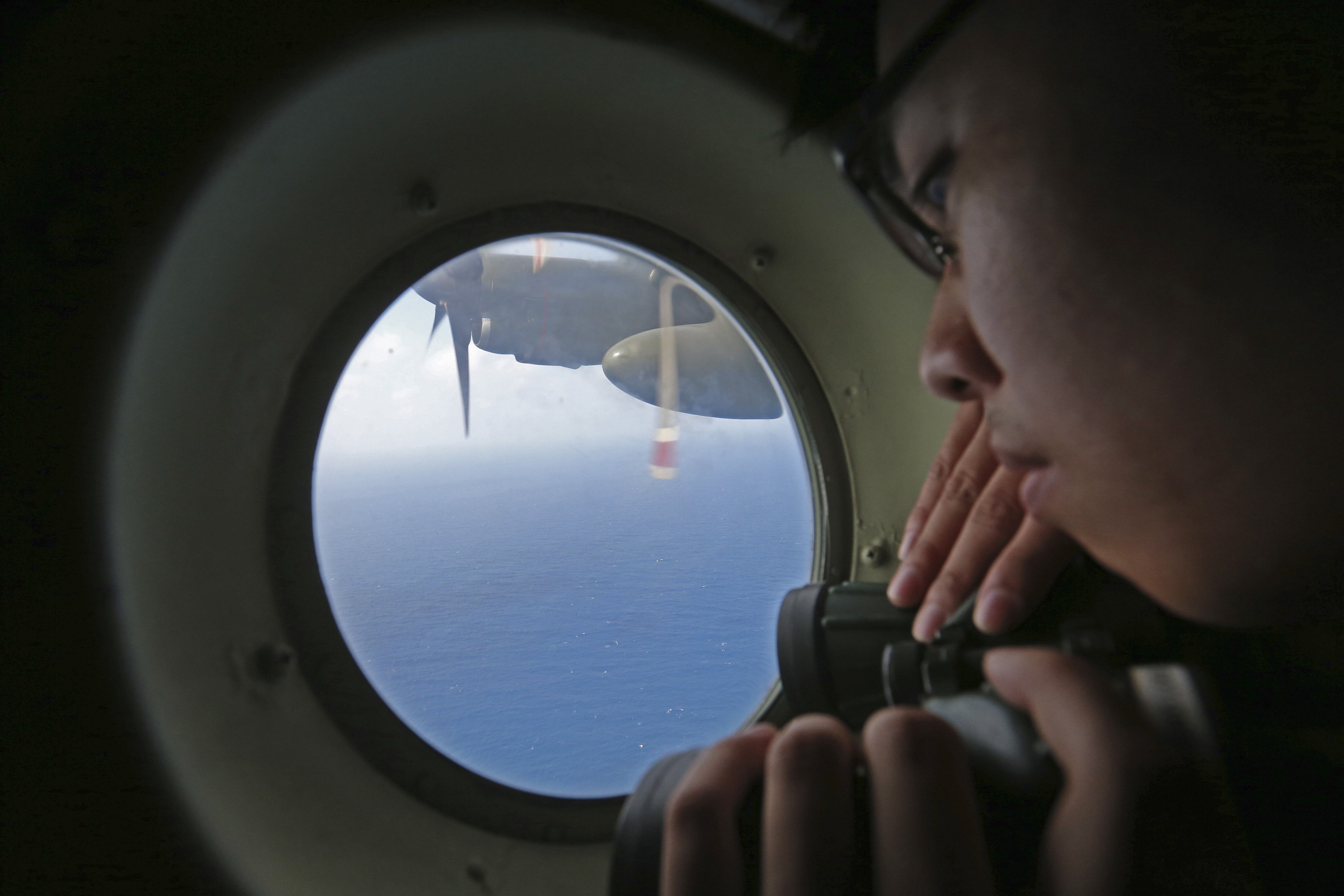 A member of the military personnel looks out of a Republic of Singapore Air Force (RSAF) C130 transport plane during a search for the missing Malaysia Airlines MH370 plane over the South China Sea, March 12, 2014. ― Reuters pic Relatives of passengers from the missing Malaysia Airlines Boeing 777-200 plane wait on a bus after picking up their Malaysian visas at the Metro Park Lido Hotel in Beijing on March 12, 2014. ― AFP pic 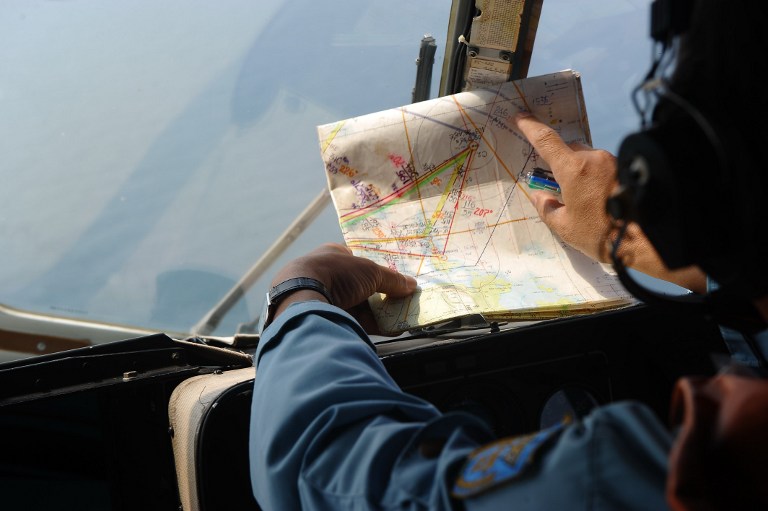 A crew member checking a map on-board a Vietnamese Air Force Russian-made MI-171 helicopter during a search flight some 200km over the southern Vietnamese waters off Phu Quoc island on March 12, 2014. ― AFP pic 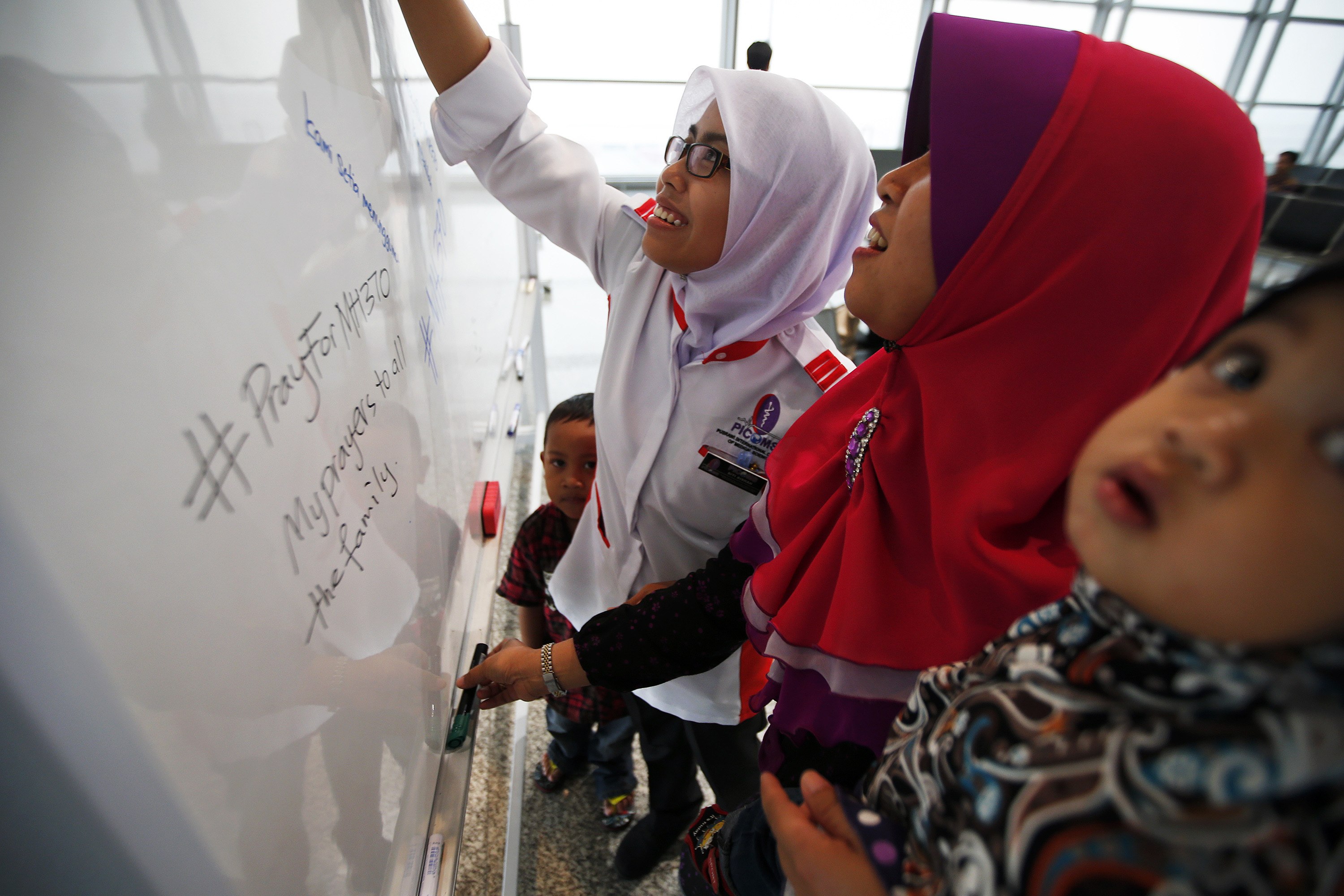 Women leave messages of support and hope for the passengers of the missing Malaysia Airlines flight MH370 at the Kuala Lumpur International Airport, March 12, 2014. ― Reuters pic 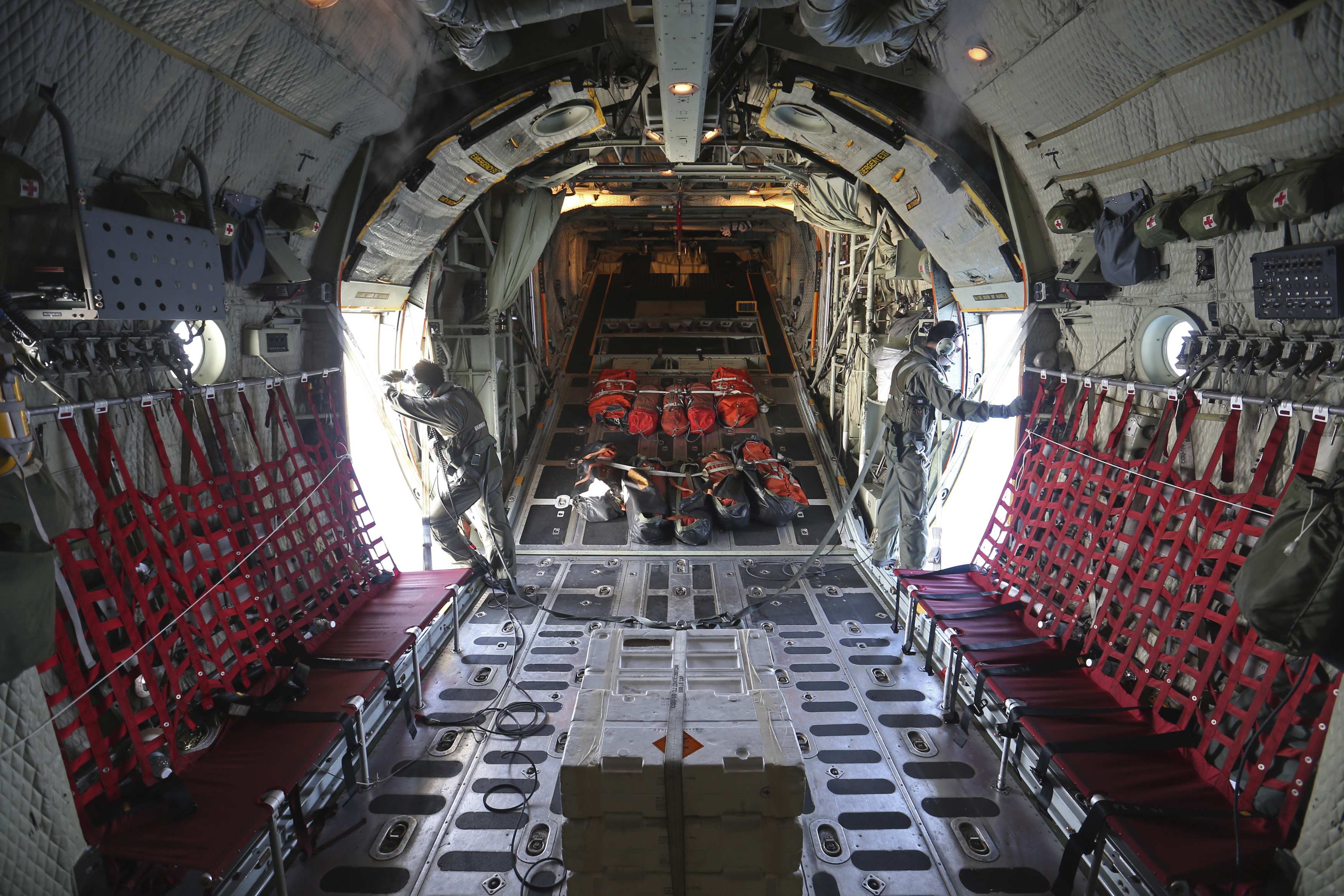 Military personnel look out of a Republic of Singapore Air Force (RSAF) C130 transport plane as they search for the missing Malaysia Airlines MH370 plane over the South China Sea, March 12, 2014. ― Reuters pic

“With the cause of the disappearance still unknown you can understand the need for discretion and caution but it’s being perceived in Malaysia and elsewhere in the region as a bid to hide the truth.”

“That’s the way they’ve acted for generations and they are starting to find out it doesn’t work anymore.”

Many newspapers and television networks in Malaysia are controlled by the government directly or indirectly. And Najib, 60, has yet to make good on a pledge to replace the nation’s Sedition Act with legislation that would protect free speech while preventing incitement of religious or ethnic hatred. The law, which dates back to 1948 when Malaysia was under British control, mandates jail sentences of at least three years for words deemed seditious, including those that “excite dissatisfaction” against the government.

Government-controlled Malaysian Airlines said in a statement yesterday it would “continue to be transparent in communicating with the general public via the media” on all matters affecting Flight 370.

Nations searching for the plane had little to go on with no distress calls, emergency-beacon signals, bad weather or other signs why an airliner would lose touch in one of the safest phases of flight. The discovery that two passengers boarded the missing flight using stolen passports raised concern about Malaysia’s immigration security practices.

“The Malaysian side cannot shirk its responsibilities,” the Global Times, a Chinese government-controlled newspaper, said in an editorial on March 10. “The initial response from Malaysia was not swift enough. There are loopholes in the work of Malaysia Airlines and security authorities.”

Faced with pressure from families of the 153 Chinese nationals who were on the flight, Chinese Foreign Ministry spokesman Qin Gang for a second day yesterday noted the lack of progress in finding the Boeing Co. 777-200.

“We once again request and urge the Malaysia side to enhance and strengthen rescue and searching efforts,” Qin told reporters in Beijing.

“The Chinese government is under quite a lot of pressure,” said Xu Liping, senior fellow at the National Institute of International Strategy at the Chinese Academy of Social Sciences in Beijing. Ordinary people in China feel the investigation “has not been professional.”

Broader ties between Malaysia and China probably won’t suffer, he said, citing a phone conversation between Chinese Premier Li Keqiang and Najib on March 8 about the missing flight. “This channel has been unimpeded.”

China accounted for RM8.262 billion of Malaysia’s exports in January, the second-largest amount after Singapore. Malaysia approved US$920 million (RM3 billion) of foreign investment from China in the manufacturing sector in 2013, up from US$646 million the year earlier, according to the Malaysian Investment Development Authority.

The Malaysia market has not shown much reaction this week to the missing plane, with the FTSE Bursa Malaysia KLCI Index down 0.2 per cent this week. 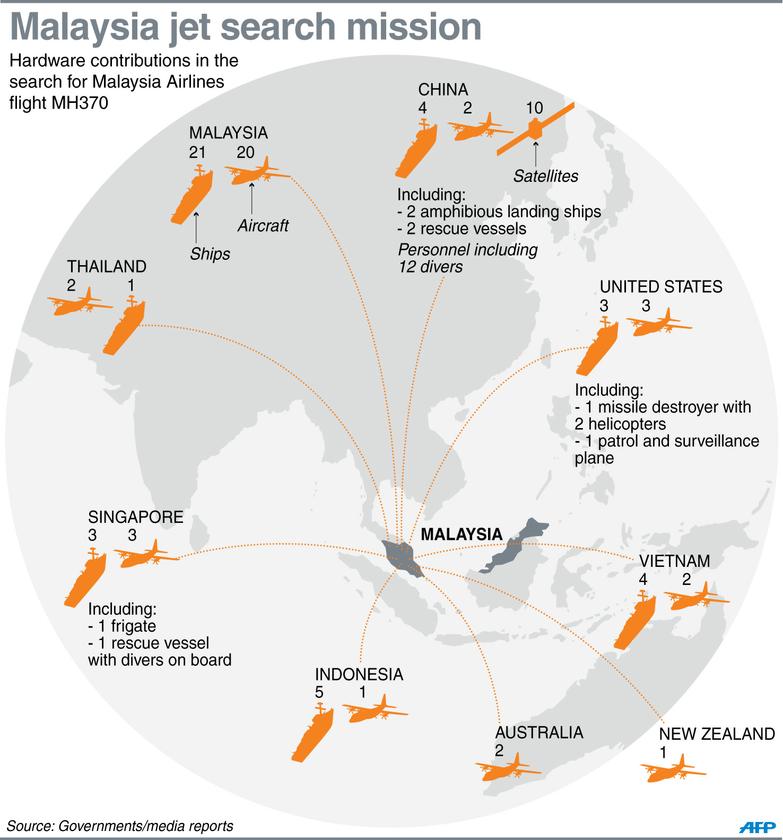 It is understandable that Najib doesn’t want a high profile in this situation given his cautious personality, according to Joseph Liow, associate dean of the S. Rajaratnam School of International Studies in Singapore.

“He’s not one who would go to the front of the camera and do lots of chest thumping and wave the flag and all that without being certain that there’s substantive” progress in the investigation, he said.

“Hisham is very different from his cousin. He’s someone who is not uncomfortable with the limelight,” he said, referring to Hishammuddin.

Hishammuddin, 52, has been the acting minister since a general election last May. He is unable to formally take the role given internal coalition rules on which party takes particular posts in cabinet.

Other Asian leaders have faced questions for not reacting to crises immediately. Philippine President Benigno Aquino was criticized for taking two days to visit victims of Super Typhoon Haiyan last year. So was China’s former premier, Wen Jiabao, when he took more than two weeks to visit the site of the country’s worst snow storms in 50 years in 2008.

In the US, President George W. Bush was criticised for his handling of damage caused by Hurricane Katrina in 2005 after he remained on vacation as New Orleans flooded. He cut short the break by two days to survey the damage from the air, something he later said was a “huge mistake” since it made him look “detached and uncaring.”

Najib needs to assure Malaysians and the international community that his government is doing all it can, said Vishnu Varathan, an economist at Mizuho Bank Ltd. in Singapore.

“What could have been done was the prime minister delegating the transport secretary to locating the plane and assigning one other person in charge of investigating the security breach and another to handle international relations,” he said.

“It’s not easy to convey all that is happening in the background and the government needs to highlight these things.”

Compounding the image that authorities in charge of the investigation are struggling to communicate effectively, Malaysian Airlines issued three versions of a press statement yesterday to correct several errors. One was a reference to an “expensive” rescue operation, which it meant to call “extensive.”

While he has remained silent on the details of the investigation, Najib postponed a trip to Mauritius, according to Malaysia’s state-run news service, Bernama. He also met the families of the crew from the missing plane at Kuala Lumpur International Airport, his press office said on Twitter on March 8.

“I assure you we are doing everything possible within our means,” Najib said on Twitter on March 9. “We thank you for your prayers, assistance and show of solidarity.”

Najib’s office directed queries on China’s concerns about the handling of the incident to authorities involved in the investigation.

Hishammuddin, who is also defense minister, was elected a vice president of UMNO in October, putting him in line to possibly succeed Najib. He is the nephew of Malaysia’s second prime minister, Najib’s father, Abdul Razak Hussein.

“It’s a lack of experience, anybody would be tested,” said Bridget Welsh, a political science professor at Singapore Management University. “This is Hisham’s test, and Najib’s government’s test.”

Mahathir responded with capital controls when investors fled Asian economies during the crisis. He called billionaire financier George Soros a “moron” who was trying to destroy growth through speculative attacks on the currency. — Bloomberg