Why get emotional, 'Allah' not exclusive to Muslims, says Oxford theologian 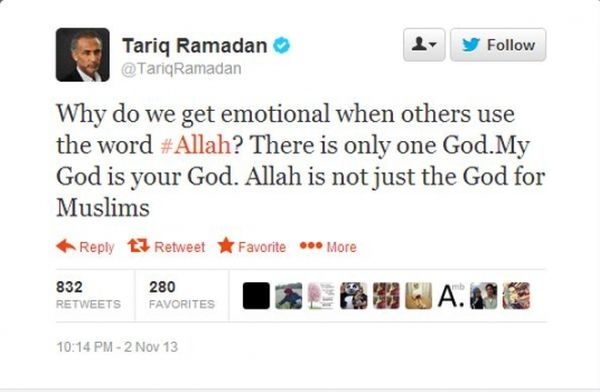 KUALA LUMPUR, Nov 3 — Only Muslims with an “inferiority complex” would monopolise the use of “Allah” when the Arabic word for God is not exclusive to Islam, celebrated Swiss-Muslim theologian Dr Tariq Ramadan has said.

The Oxford University professor of contemporary Islamic studies, who was hailed by Foreign Policy magazine as one of the top 100 global thinkers last year, took to Twitter yesterday to add his voice to a growing number of prominent Muslims outside Malaysia who have been critical of the government’s stand that “Allah” cannot be used by followers of other faiths as it will cause confusion to Muslims.

“Why do we get emotional when others use the word #Allah?” Ramadan asked on his Twitter account, @TariqRamadan handle.

“There is only one God. My God is your God. Allah is not just the God for Muslims,” he wrote.

He added: “It is because of an inferiority complex that the word #Allah is monopolized. How about monopolizing good deeds instead?”

Ramadan, who comes from an illustrious religious family—his father, Said Ramadan, was a prominent figure in Egypt’s Muslim Brotherhood founded by his maternal grandfather, Hassan al-Banna, while his grand-uncle, Gamal al-Banna, is a famed liberal Muslim reformer—has been a vocal advocate of a progressive and moderate Islam.

In a separate Twitter entry today that seemed a continuation of his critical views on Islam and Malaysia, he remarked that non-Muslims here appear to be sharing the sentiments of Muslim minorities in the West who have been sidelined by the majority in a plural society.

He included the link to an article he had previously penned on religion here, under the hashtag Malaysia.

In the article titled “Malaysia: which challenges towards which modernity?”, Ramadan wrote that Hindu, Buddhist, Christian and atheist Malaysian citizens often feel that they are “captives in a debate that marginalises or exploits them”.

“Like the mirror image of many Muslim citizens in the West, they may be perfectly respectful of the constitution, of the laws and prerogatives of the civil state, but it is as if they are slightly excluded from the shared narrative upon which the Malaysia nation is founded,” said the scholar, who had studied at the Al-Azhar University in Egypt.

“It has proved difficult for them to achieve the fully equal status that would establish their sense of belonging to a pluralist society,” Ramadan added.

Ramadan’s remarks on the “Allah” controversy in Malaysia follows criticism by other international publications against the Court of Appeal ruling earlier this month that found that the Home Ministry’s decision to ban the use of the Arabic word in the Catholic Church’s weekly, the Herald, was justified.

The three-judge panel ruled that the use of the word “Allah” was not integral to the practice of the Christian faith, overturning a High Court decision that the ban was unconstitutional.

Prolific Turkish writer Harun Yahya had last week urged Putrajaya to reverse its ban on the use of the word “Allah” by non-Muslims here, saying the decision was “based on illogical and theologically unacceptable reasoning”.

The writer—whose real name is Adnan Oktar and who had achieved cult status among Muslim here for his rejection of Darwinism—said such a ban would inevitably lead to an environment of severe oppression, despite Putrajaya’s repeated claim that it only applies to local Catholic newspaper The Herald.

“Such a decision cannot be accepted and defended even if it was directed at one newspaper or a single person,” Oktar wrote in an opinion piece carried by Indonesian daily The Jakarta Post on October 25.

He added: “This decision, which is completely against Islam, a religion of peace and brotherhood, must be reversed and there must be freedom of expression for everyone.”

“Allah is a construction of the word al-Ilah... Al-Ilah means ‘The God’. Allah is not the name of God,” Aslan told radio station BFM last month.

The American scholar, who has written two books on Islam and one on Christianity, said it was “almost a blasphemous thought to think that Allah has a name”.

Local Islamic scholar Datuk Dr Mohd Asri Zainul Abidin has similarly said that the Quran allows ― and even encourages ― non-Muslims to address God as “Allah”, as long as they are referring to “The Supreme Being”.

The former Perlis mufti said last month that banning non-Muslims from calling God “Allah” is tantamount to “syirik”, which refers to the sin of practising idolatry or polytheism and is an unforgivable crime in Islam.

Ramadan is scheduled to speak at a health conference in Petaling Jaya, Selangor on Wednesday.