Not to be missed: The Opera Opulence Gallery at the Ground Atrium features an exhibition of lavish Chinese opera costumes. — Pictures by Yusof Mat Isa
Follow us on Instagram, subscribe to our Telegram channel and browser alerts for the latest news you need to know.
By MELANIE CHALIL

The Taiping-born and bred designer fondly remembers watching Chinese opera as a young boy and although he didn’t know what the performers were singing about, he was mesmerised by the striking costumes.

“The stage was very high and I could only see half of what was going on so I would go backstage to see how the performers would put on their makeup and fix their headgear.

“It was very much like a fashion show to me, and I recall just waiting to see what they would wear for the next song,” he told Malay Mail.

Ong took three weeks to complete the 11-piece collection that will only be available at Intermark Mall. 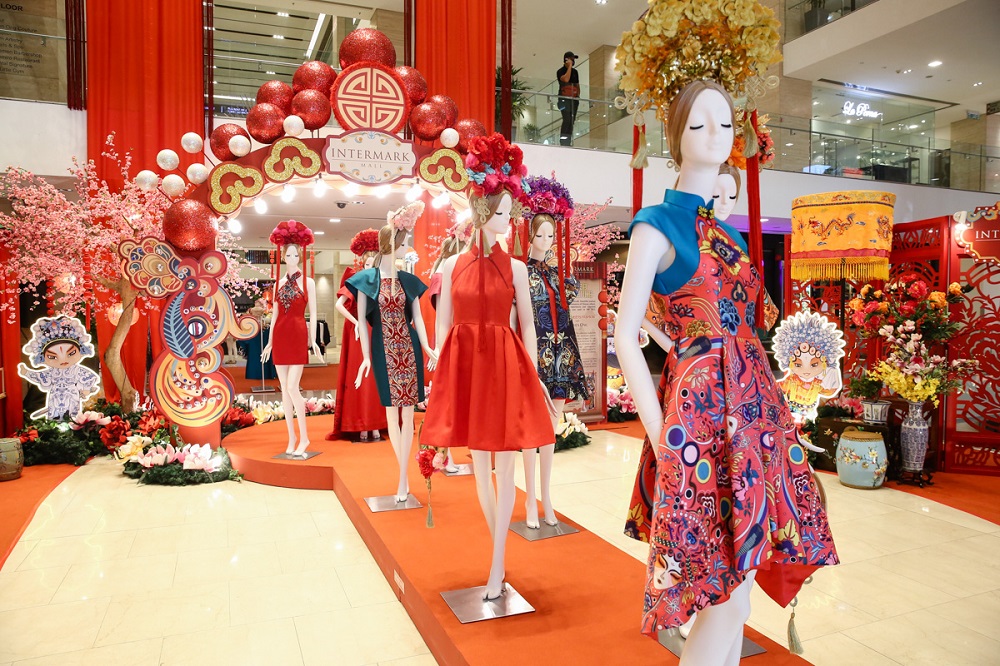 “Chinese opera is so interesting from head to toe, even the makeup, and I drew inspiration from all that to modernise it,” he said.

The challenge for Ong was to make the pieces comfortable for the wearer so he used duchess satin for its structure and colour absorption during the printing stage.

“The cape and fit-and-flare cheongsam cutting will fit people’s bodies perfectly,” he said. 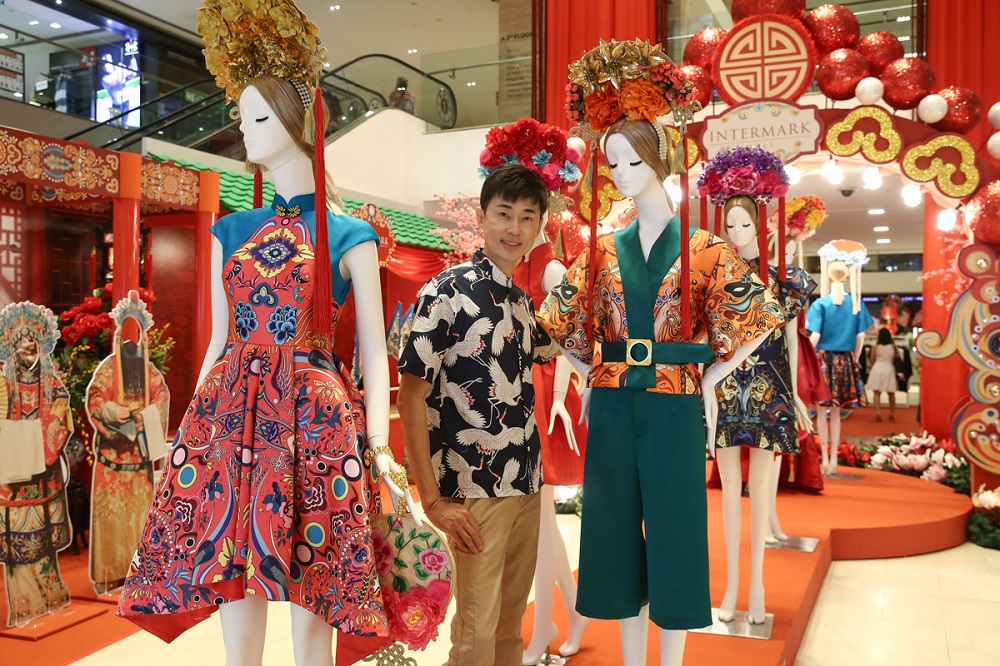 Ong has fond memories of being mesmerised by the vibrant costumes at Chinese opera performances when he was a young boy.

Ong added that he hopes this collection will inspire the public to get interested in the rich history of Chinese opera.

To bolster this, Intermark Mall has put together the Opera Opulence Gallery, a tastefully curated exhibition featuring a private collection of lavish and extravagant Chinese opera costumes at the Ground Atrium.

Intermark Mall has also put together the Opera Opulence Gallery, a tastefully curated exhibition featuring a private collection of lavish and extravagant Chinese opera costumes at the Ground Atrium.

Whether or not Chinese opera is your cup of tea, the exhibition featuring the private collection of Cantonese opera artists Chan Wan Heng and her son Lim Choo Leong is not to be missed.

Chan, whose parents were also opera performers, began performing when she was 18.

Yue opera or Cantonese opera originated in southern China’s Guangdong Province that was popular in Guangxi, Hong Kong, Macau and among the Chinese diaspora in Southeast Asia.

Lim told Malay Mail that besides the dialect, Cantonese opera can be distinguished through music notes and the design of the costumes. 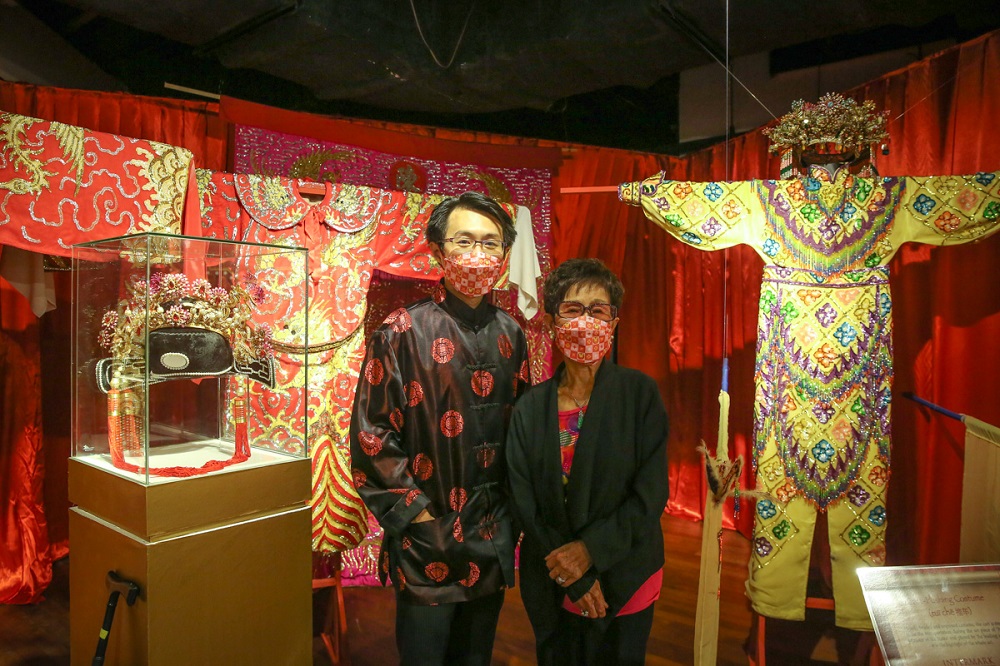 Lim (left) and his mother Chan are Chinese opera artists who want to do their best to preserve the dying artform.

Upon entering the gallery, shoppers are greeted with a beautifully bedazzled pale jade robe that Lim’s mother created herself.

Save for a porcelain-hued military costume that was made in China, the others were custom-made in Hong Kong.

Most of the pieces were worn by Chan while some belonged to her late husband.

“They must be kept in a dry environment and they are preserved with mothballs and small firecrackers to absorb moisture,” her son Lim said.

Chinese opera enjoyed immense popularity in Malaysia during the 1950s and 1960s but the art form started declining in the 1980s.

“Firstly, it was due to the economic crisis and then there was competition from other forms of entertainment such as cinemas which replaced Chinese opera,” Chan said.

Despite its rarity, Chinese opera troupes continue to perform both full-time and part-time with professional and amateur performers. 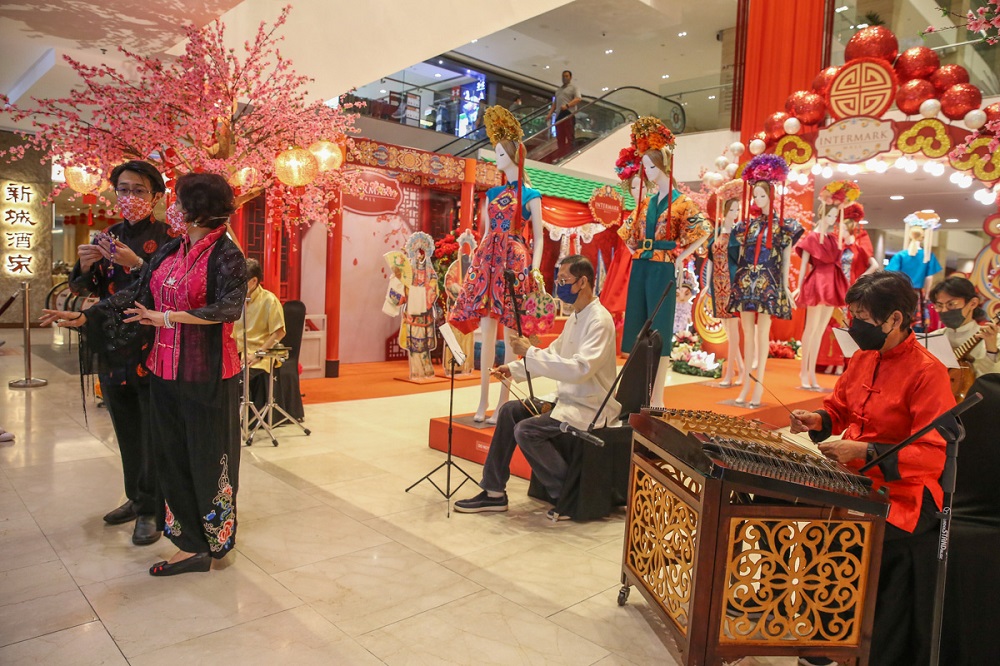 Chinese opera was popular in the 1950s and 1960s in Malaysia but started declining in the 1980s due to competition from other forms of entertainment.

At 82, Chan still performs full-time while her son does it part-time.

“There are different occasions where we’d perform, besides the annual temple performances, we also perform at corporate events, shopping malls and fundraisers,” said Lim, 40.

The mother and son duo didn’t have to think twice when Intermark Mall offered them a public space to display their family’s beautiful costumes, both agreeing it was a good avenue to promote the traditional art form.

“We feel honoured that there is a corporate organisation giving us the opportunity to share this with the public who can have a closer look at the culture,” Lim said.

For those who have yet to be introduced to the splendour and rich history of Chinese opera, Chan said paying attention to the lyrics is a good place to start.

Having witnessed the rise and fall of a Chinese tradition that can be traced back to the Three Kingdoms Period (220 to 280 AD) Chan cannot help but feel something precious is slipping away.

“It’s a pity because the art is dying.

“We can’t be certain whether the art form will continue to stay alive but we want to do our best to preserve the tradition,” she said.