PETALING JAYA, Aug 13 — Contrary to popular belief, KL-style Hokkien mee can be pork-free. Just get around 20 kilograms of chicken skin, fry up to make into sublime “crackers” that ooze out the flavourful oil when you bite into it.

That’s what Jamal Tan bin Abdullah does every week to give flavour to his Hokkien mee; some people can’t even tell the difference between his version and the real deal.

Jamal is a third generation Hokkien mee hawker, inheriting his skills from his grandfather who set up stall back in 1957 at the Taman Selera in PJ Old Town. 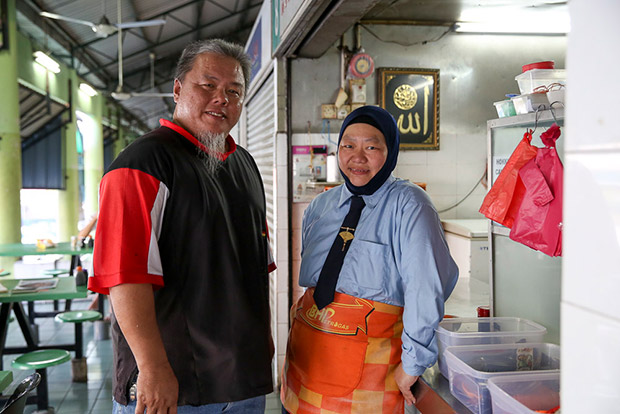 The stall moved around the area because of redevelopment and ended up under four big trees known collectively as Tai Shi Tau (big tree trunk in Cantonese) in 1990.

After the trees were chopped down, the authorities built a food court there and the stall returned in 1996. In 2008, Jamal’s business crashed with the Japanese encephalitis (JE) scare (the disease affected pigs) and it almost bankrupted him.

Feeling lost and confused, he took a friend’s advice to give up pork and convert to Islam. 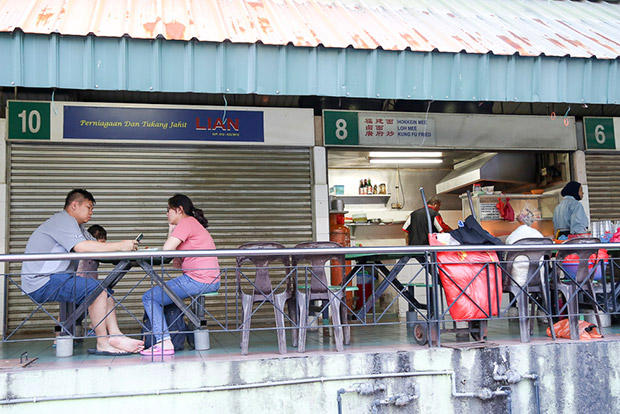 The stall is located at a small food court opposite the Good Shepherd Lutheran Church.

He spent about three months experimenting many times before he succeeded in making these fried chicken fatty bits. Friends had told him it was impossible to make non-pork “lard” bits but he pushed on with his version.

Since the oil is rendered from the crunchy bits, he ingeniously adds shallot crisps to the mixture to give it extra fragrance. As it’s not easy to source for chicken skin, he only makes one batch each week. 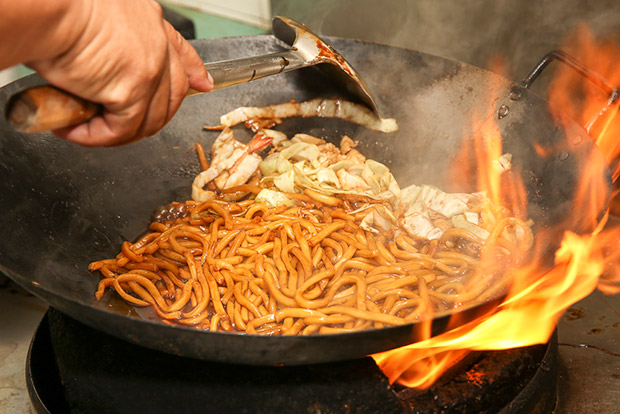 Frying the noodles require skills to handle the heavy wok and strong fire.

Once you fry it with the noodles, dark soy sauce, cabbage, prawns and chicken meat, it gives the dish an incredible boost of flavour. For a more decadent meal, ask for an extra portion of the fried chicken fat.

Jamal’s wife, Ooi Hai Choo, tells us that some regulars can’t even tell the difference. One of their customers only took notice after five years of eating the pork-free version when he saw that the small stall had attracted a steady stream of Malay customers. She says, “It’s 1Malaysian, everyone can eat it.” 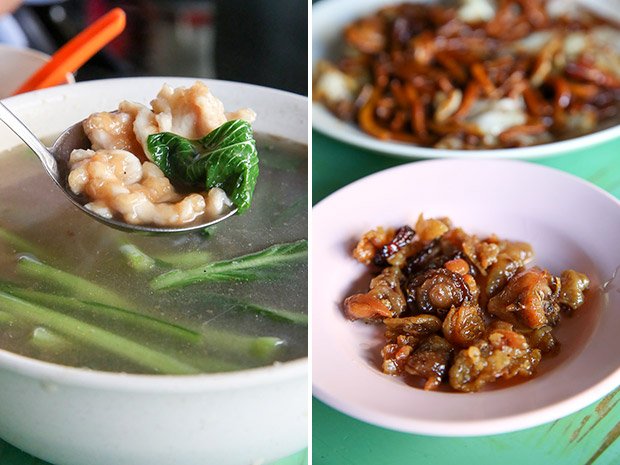 Try the comforting bak chor teng made with chicken (left). If you are feeling decadent, ask for extra fried chicken fat on the side (right). 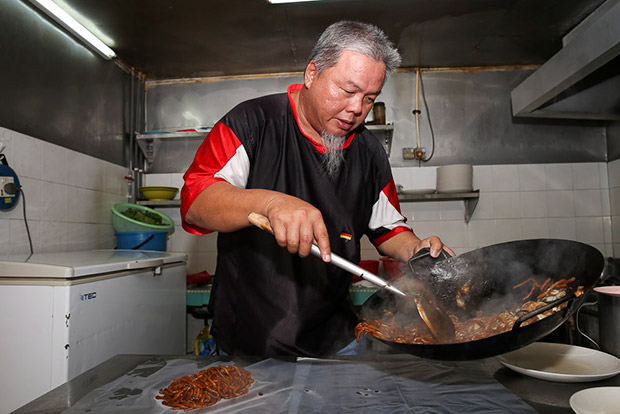 The stall got wider recognition when TV personality Razif Hashim featured them on his food show Best in the World that was aired on the Asian Food Channel in 2014.

Many Malay customers flock to the stall including Adam Jazzy who is a regular. “This is one of a kind and it is halal,” he said when we met him packing home his Hokkien mee.

On weekends, regulars usually call up to book their favourite items, as they know it’ll run out quickly. Customers come from as far as Johor Baru to eat the noodles.

Aside from Hokkien mee, the stall also serves Cantonese fried noodles, two types of loh mee (Ulu Yam or plain white) and kuey teow bulan. Ooi recommends the Ulu Yam version if you like your thick noodles to be sourish since the vinegar is pre-added while the white version is plain. The kuey teow bulan has a raw egg cracked over the fried noodles.

The kuey teow bulan got its name from the cracked raw egg — which resembles a full moon — nestling in the fried noodles. Ooi explains that you need to mix it all up when it’s piping hot.

The egg acts as a “protective layer” for the noodles; it prevents the oil sticking to the noodles and jeopardising the taste of the dish.

The stall also does some off-menu items like a pork-free version of bak chor teng, where chicken pieces are coated with flour and served with a piping hot soup. This tastes divine when eaten with vermicelli tossed in the fried chicken fat.