Police use tear gas shells to disperse students taking part in an anti-government protest demanding the resignation of Sri Lanka's President Gotabaya Rajapaksa over the country's crippling economic crisis, in Colombo May 29, 2022. — AFP pic
Follow us on Instagram, subscribe to our Telegram channel and browser alerts for the latest news you need to know.

COLOMBO, May 30 — Police fired tear gas to disperse thousands of students trying to storm the Sri Lankan president’s home yesterday as the government offered an olive branch to demonstrators demanding his resignation.

Nearby, thousands of men and women demonstrated for the 51st straight day outside Rajapaksa’s seafront office, demanding he step down over the country’s worst economic crisis since independence.

“The youth are calling for a change in the existing system,” Wickremesinghe said, laying out plans for 15 committees that would work with parliament to decide national policies.

“I propose to appoint four youth representatives to each of the 15 committees,” he said, adding that they could be drawn from the current protesters.

The demonstrations led to tense scenes in Colombo, where authorities struggled to disperse large crowds and chemical irritants hung over the streets.

Several men were seen picking up canisters spewing tear gas and throwing them back towards the police who fired them.

Female medical and science students joined the protests, with many running for cover when authorities unleashed water cannon. 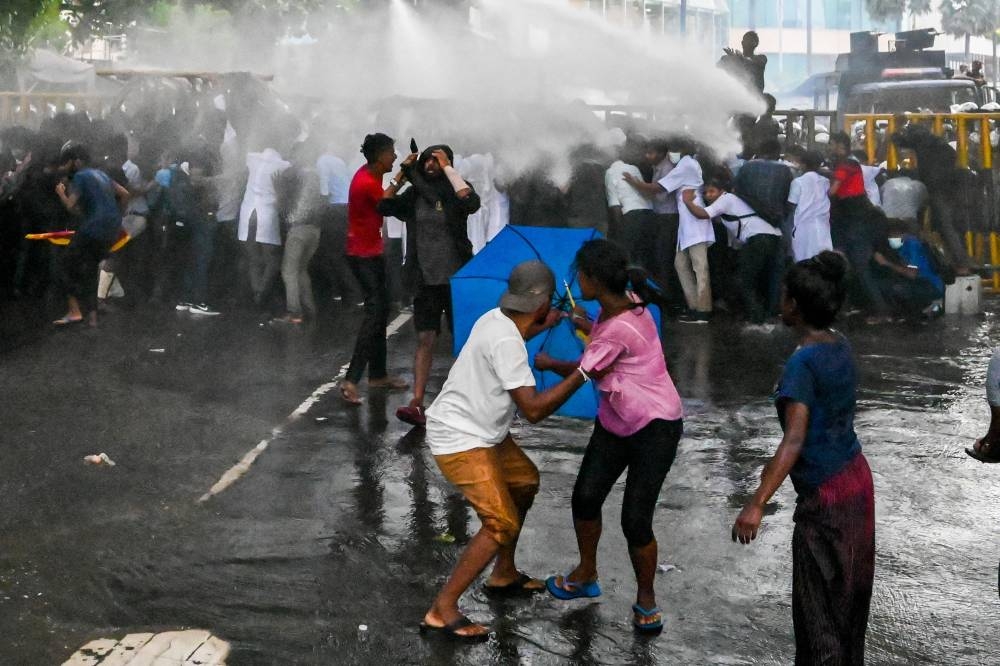 Police use a water canon to disperse students from the faculty of medicine and sciences during an anti-government demonstration demanding the resignation of Sri Lanka's President Gotabaya Rajapaksa over the country's crippling economic crisis, in Colombo May 29, 2022. — AFP pic

Wickremesinghe is not from Rajapaksa’s party, but was given the job after the president’s elder brother Mahinda resigned as prime minister on May 9 following weeks of protests, and when no other legislator agreed to step in.

Wickremesinghe is the sole parliamentary representative of the United National Party, a once-powerful political force that was nearly wiped out in Sri Lanka’s last elections.

Rajapaksa’s party, which has a majority in the legislature, has offered to provide him with the necessary support to run a government.

Yesterday's student action came a day after a similar clash when protesters tried to storm Rajapaksa’s heavily guarded colonial-era official residence, where he has bunkered down since thousands surrounded his private home on March 31.

An unprecedented shortage of foreign exchange to import even the most essential supplies, including food, fuel and medicines, has led to severe hardships for the country’s 22 million people.

The country has defaulted on its US$51 billion foreign debt.

Its currency has depreciated by 44.2 per cent against the US dollar this year, while inflation hit a record 33.8 per cent last month. — AFP