Will 2022 be the year for Malaysia’s post-Covid turnaround?

There are three cornerstones to keep in mind for Malaysia to get back up and stride forward again. — Picture by Yusof Mat Isa
Follow us on Instagram, subscribe to our Telegram channel and browser alerts for the latest news you need to know.
By R. LOHESWAR

KUALA LUMPUR, Jan 1 — As Malaysians usher in 2022, the desire for a return to stability and prosperity burns brighter than ever after the disastrous end to 2021 marked by heavy rains, floods and landslides that displaced tens of thousands of people and cost untold millions of ringgit in damages to property.

Add to that the thousands of new Covid-19 infections and double digit deaths daily while the economy hobbles along after taking a pounding from lengthy lockdowns and various movement restrictions.

But in that desire for “normalcy”, there are three cornerstones to keep in mind for Malaysia to get back up and stride forward again. 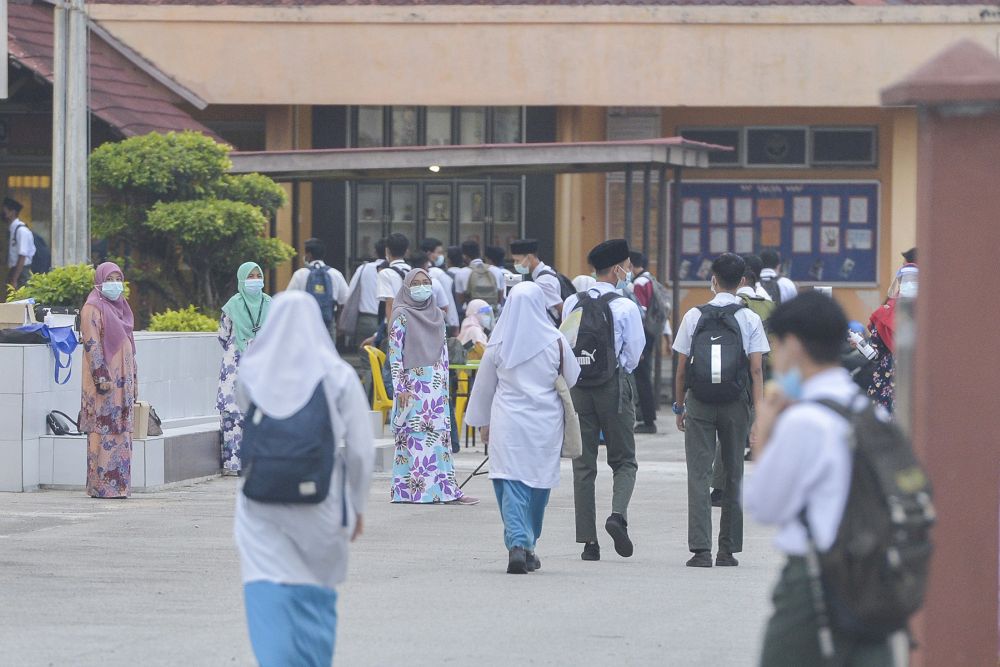 Last year, the 'Family On Edge' survey found that the number of students from many of Klang Valley’s B40 poor communities returning to the classroom were falling at an alarming rate due to the repeated disruptions caused by Covid-19 outbreaks. — Picture by Miera Zulyana

The past 24 months have been extremely difficult for school children, especially those sitting for SPM and STPM (or their equivalent), the precursor national exams before they enter college or university.

They’ve had to cope with zero physical classes, poor internet reception, distant supervision, and lack of direction at a crucial juncture in their lives as they transition from childhood to adulthood.

The number of school dropouts totalled 21,316 students, according to the Education Ministry’s most recently available data collated from March 2020 to July 2021.

A check of the statistics on the Education Ministry’s website shows that there are 5,038,318 students in Malaysia while the Department of Statistics Malaysia (DOSM) said there were 7,780 primary schools and 2,440 secondary schools in Malaysia.

Last year, the “Family On Edge” survey jointly commissioned by the United Nations Population Fund (UNFPA) and United Nations Children’s Fund (Unicef) found that the number of students from many of Klang Valley’s B40 poor communities returning to the classroom were falling at an alarming rate due to the repeated disruptions caused by Covid-19 outbreaks.

Among the findings of the study was that some of the children had become demotivated or lost interest in continuing school, while some families had difficulties paying tuition fees and transportation fees or giving pocket money.

The survey also found that eight out of 10 students come from households with no computers or laptops, while nine of 10 only had smartphones as their learning devices.

The government has attempted to provide students with these tools for study. Sadly reports emerged that these items were in poor condition or outdated, while others exploded after use.

All this while teachers struggled to continue with the education syllabus and conduct exams in a safe environment.

SPM and STPM used to be held in October or November yearly but the intermittent lockdowns over the past two years have knocked these national examinations off their regular schedules, postponing them to February and March 2022.

In December, flash floods in Selangor, Kuala Lumpur, Pahang, Terengganu and Kelantan swept away hundreds of thousands of homes, displacing Malaysians and causing unprecedented damage at a national disaster level.

Health officials are also keeping a close watch on a possible surge in Covid-19 cases with thousands of people forced to shelter at temporary relief centres, putting them in close proximity with each other.

Students, displaced by the floods, and with even more limited access to learning materials and internet-connected devices, will face an even higher wall with the academic year officially starting tomorrow for Johor, Kedah, Kelantan, and Terengganu, and the day after for the rest of the country.

How Malaysia deals with this “lost generation” of school children in the near future will determine the country’s global ranking in the years to come. 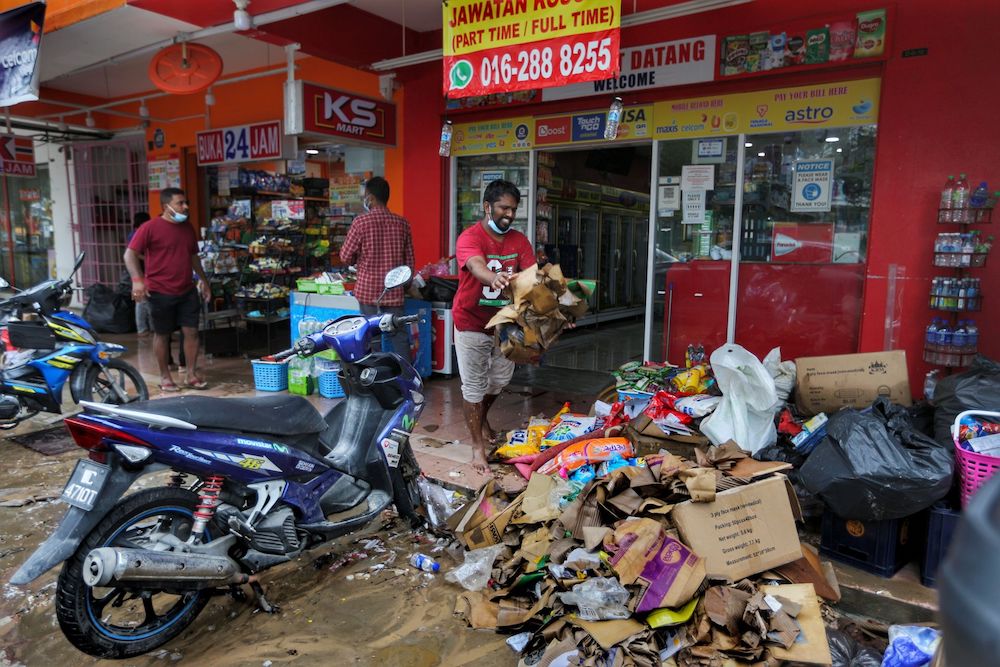 Many businesses will require a leg-up to repair and reopen their shops following the December floods. — Picture by Ahmad Zamzahuri

As many as 705,000 Malaysians were jobless as of last October based on the most recently available data from the Department of Statistics.

At that time, 15.5 million were employed with the bulk in the services sector, particularly in wholesale and retail trade; food and beverages services; information and communication and transport and storage activities.

Similarly, the employment in manufacturing and construction sectors remained positive whereas agriculture and mining and quarrying sectors were on a decline.

At that time, most states in the country had segued into Phase 4 of the National Recovery Plan, which saw many economic sectors such as cinemas, eateries, night markets, pasar malam and supermarkets and malls reopening and so reinvigorating the job market.

The Finance Ministry has said it targets to create 600,000 jobs under its Jamin Kerja Keluarga Malaysia (JaminKerja) initiative under Budget 2022 and has set aside about RM4.8 billion (US$1.16 billion) for it.

In addition to the JaminKerja initiative, the government would also continue the MySTEP Programme by creating 80,000 contract employment opportunities, covering 50,000 jobs in the public sector and 30,000 jobs in government-linked companies (GLCs) from January 2022.

On the flip side, many merchants were forced to change the structure of work and resources they needed and go digital. This means businesses may not need as many staff as they did pre-pandemic or even a brick-and-mortar store.

They have been working from home for two years and have adapted.

Digitalisation and more investment in automation and technology will also change the landscape of doing business, hence those who lost their jobs during the pandemic may have difficulty returning to them once Malaysia moves into an endemic stage.

JobStreet, one of Malaysia’s leading job recruitment agencies, said eight out of 10 Malaysians retrenched during the pandemic are actively looking for jobs now.

It said 63 per cent of respondents shared that they experienced a lower success rate in getting interviews, while 60 per cent encountered less suitable jobs being advertised.

But then the December floods struck. More bad weather has been forecasted for the immediate future, impeding clean-up efforts initiated mostly by volunteers.

The damage to people who have lost not only their homes but also ways to earn a livelihood from losing their cars, bikes, trucks, shops, goods, farms, harvest has not been calculated but can be estimated to run into millions of ringgit if not more considering Selangor was among the hardest hit and is Malaysia’s most developed state.

Many businesses — small, medium and even chain store operations — will require a leg-up to repair and reopen their shops. The federal and state governments will need to give serious consideration to this if the economy is to revitalise. 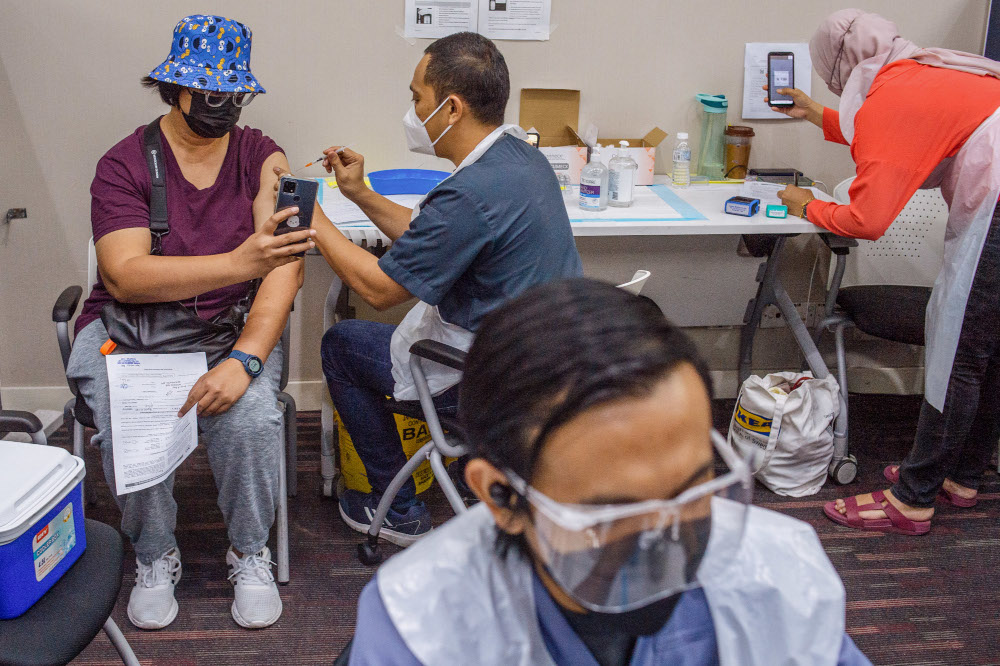 The continuing pandemic for the second year has required the government to make public healthcare its top priority. To this end, Putrajaya allocated RM32.4 billion in Budget 2022. — Picture by Shafwan Zaidon

Malaysia paused its move to the endemic stage on November 30 following news of the emergence of a new, highly infectious Covid-19 variant — Omicron. First detected in South Africa, this variant has spread around the world and become the most dominant strain in some countries, like the United Kingdom and the United States.

As of the time of writing, more than 60 cases of Omicron have been detected within our borders. Health and disease experts are still investigating this new variant to see if it’s as deadly as Delta.

The continuing pandemic for the second year has required the government to make public healthcare its top priority. To this end, Putrajaya allocated RM32.4 billion in Budget 2022.

An additional RM2 billion has been allocated for Covid-19 hospital treatment, and RM6 billion for vaccines alone, including booster shots. Putrajaya agreed to buy 88 million vaccine dose, which can cover 140 per cent of the population with enough leftover for those aged 12 and above to receive their third doses.

Health Minister Khairy Jamaluddin said that 5.57 million people, about 24 per cent of the adult population here, have received their booster doses to date.

Despite being wary of another surge in infections, Khairy said the government has yet to decide on whether to make Covid-19 booster shots a condition for individuals to be considered fully vaccinated.

But contracting Covid-19 is not the only health risk at hand.

The strain of living under lockdown over the past two years has taken a heavy toll on many people’s minds, judging from 109,806 calls for help made to the Health Ministry’s Psychosocial Support Helpline inthe first half of last year alone. Data for the second half has yet to be made available.

But one thing is for sure, suicide rates in 2021 have gone up. Health director-general Tan Sri Dr Noor Hisham Abdullah disclosed in June that suicides for the first quarter of last year amounted to 336, over half of the total number of suicides reported throughout 2020 alone.

This was corroborated by police statistics on July 2021 showing an uptick in suicides in the country with 1,708 cases from 2019 until May 2021. That’s an average of two suicides a day.

To this end, the government allocated RM70 million for mental health support under Budget 2022.

The Malaysian Health Coalition — an umbrella body comprising health workers, professional groups and individuals dedicated to improving healthcare in the country — said the amount is inadequate, being a mere 1.5 per cent increase from last year. 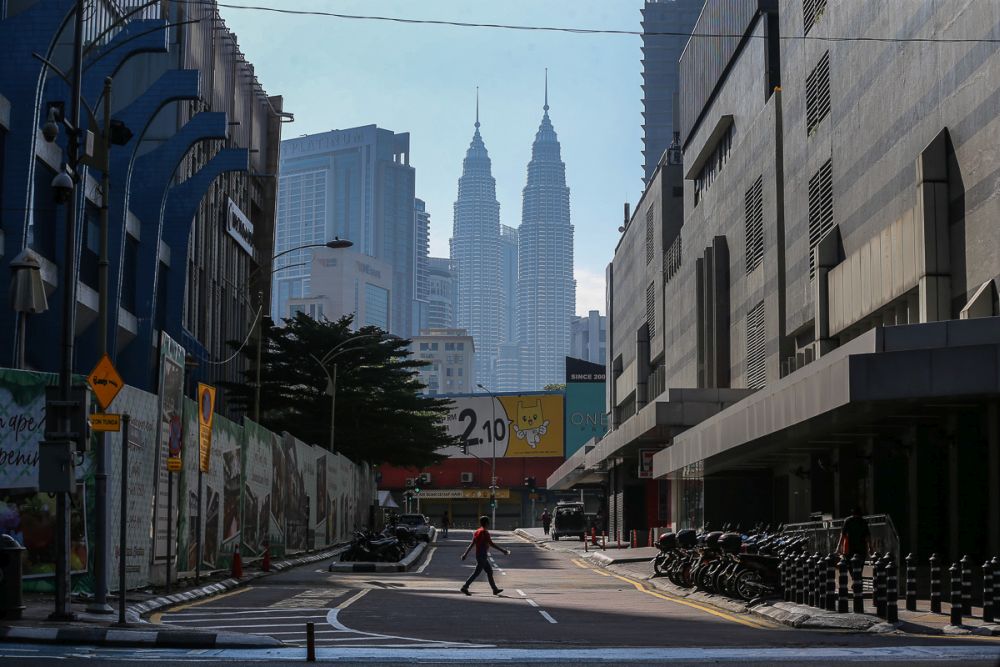 While the government has said lockdowns are unlikely, given the devastating effect on the economy, it has not entirely ruled it out.

For now, many physical restrictions remain in place as part of public health safety precautions as they rightfully should.

But two years of enforced physical distancing, travel restrictions, emptied bank accounts, and on top of that reduced family interactions during festive occasions have hurt the Malaysian psyche. It may be intangible, but the effects are long-term.

So far, the government has cancelled official New Year celebrations. Those who celebrate Thaipusam, which falls on January 18, and Chinese New Year on February 1 and 2, may wonder at what will become of these occasions this year.