The finance minister said these statewide thresholds were similar to the four-phase benchmarks under the National Recovery Plan (NRP), just scaled down to reflect the population of each state, their daily average number of new Covid-19 cases, their respective hospital Intensive Care Unit (ICU) capacity and their respective vaccination rate.

To calculate the daily case average needed for each state to exit NRP phase, a formula of (N x (Y/Z)) is applied, with N representing the national case average required to exit each NRP phase, Y the respective state’s population, and Z the population of Malaysia. 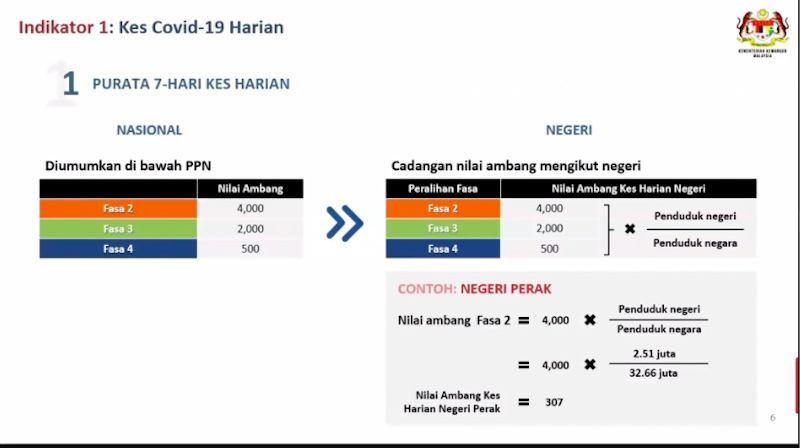 For example, Perak with a population 2.51 million requires their daily case average to drop below 307 cases to transition into Phase 2, a figure obtained after calculating 4000 x (2.51 million/32.66 million).

Similarly, NRP’s respective daily case thresholds can be interchanged into the formula to obtain the required threshold needed to transition into Phase 3 and Phase 4 respectively.

“According to current statistics, 10 states actually have recorded statewide daily case averages that allow them to transition into Phase 2, but this is before other thresholds have been taken into account,” Tengku Zafrul said. A slide presented during a virtual press conference showed Perlis with the lowest seven-day case average of two cases and 0.8 cases per 100,000 people which actually is sufficient to move into Phase 4 of the NRP that allows almost all economic activities and sectors to operate.

As for the next two requirements, which are the capacity of ICUs in the state and the vaccination rate, the thresholds required are identical to the national requirements to exit each respective phase. 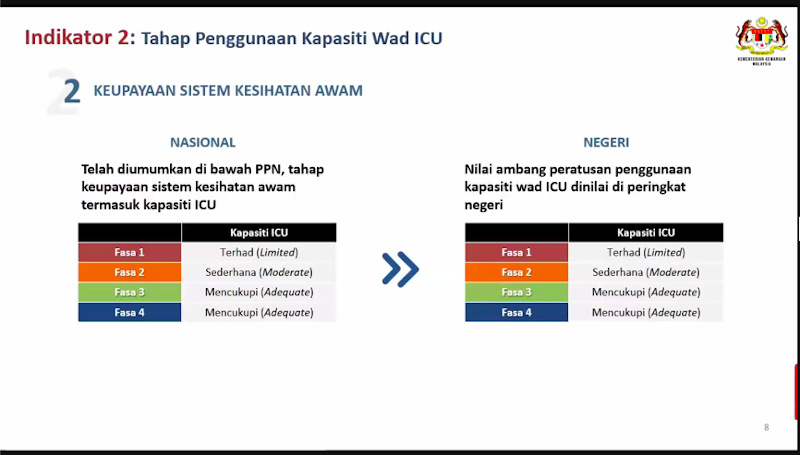 Currently all states except the five allowed to transition into Phase 2 have reported limited space in their respective ICU. Perak, Perlis and Terengganu report an “adequate” load on their units, while ICUs in Kelantan, Pahang and Sabah are currently at a “moderate” load.

Exact definitions on the thresholds described as limited, moderate, and adequate are still blurry with the Health Ministry yet to provide a detailed explanation. Statistics provided during the press conference showed Putrajaya as the Federal Territory with the highest vaccination rate with 41.9 per cent of the population already with their second dose, followed by Labuan with 24.4 per cent fully vaccinated and Perlis with 23.5 per cent.

The rest of the states show vaccination rates for second doses below 20 per cent, while four states are below the 10 per cent mark, namely Selangor with only seven per cent fully vaccinated, Sabah with 7.8 per cent already with double dose, Johor with 9.5 per cent and Penang with 9.8 per cent.

Additionally, Tengku Zafrul said each state’s performance will be evaluated from time to time to ensure each state that successfully lowers its case numbers will be duly rewarded with the relaxed regulations that come with each NRP Phase.