Miti: In Selangor MCO 3.0 areas, 30pc management allowed in office, other staff based on employers’ discretion

The ministry added that any companies that were found to not have complied with SOPs would be met with legal action, including the closure of the company’s operations for a certain period. ― Picture by Hari Anggara
Follow us on Instagram, subscribe to our Telegram channel and browser alerts for the latest news you need to know.
By IDA LIM

KUALA LUMPUR, May 5 — Companies in six districts in Selangor that will be under the movement control order (MCO) 3.0 from tomorrow onwards will be allowed to have 30 per cent of management staff present at the workplace, the Ministry of International Trade and Industry said today.

In announcing the rules for the six Selangor districts that will be under MCO from May 6 to May 17, Miti said the government has agreed to allow all economic sectors including factories or manufacturers to continue operating here, except for certain activities listed under the negative list under the MCO 3.0 general standard operating procedures.

The ministry also said the SOP for the six Selangor districts would be based on existing SOPs for MCO areas.

“The MCO 3.0 general SOP is based on the existing MCO SOP, except that dine-in activities are not allowed in restaurants,” the ministry said in a statement today, adding that this SOP can be accessed on the National Security Council’s website.

“Companies have to comply with the MCO 3.0 general SOPs and are subject to the existing Work From Home (WFH) procedures, which is only 30 per cent of management staff can come to the office as usual without restrictions in working hours, while the attendance of operation/support staff is to be determined by the employer according to discretion,” it added.

The ministry added that any companies that were found to not have complied with SOPs would be met with legal action, including the closure of the company’s operations for a certain period.

In the general MCO 3.0 SOPs released by the NSC for the six Selangor districts, the negative list or the list of prohibited activities include spas and reflexology activities under the economic activity category.

Other activities in the negative list include nightclub or pub activities, activities at theme parks, indoor playgrounds, family karaoke and cinemas, sports and recreational activities that involve physical contact except for Malaysia’s football, hockey and sepak takraw leagues, operations of sports premises that are not fully or not open-air without supervision, activities where physical distancing would be difficult such as hiking, fun runs, fun rides, marathons and triathlons.

Apart from the negative list, the SOPs also state that face-to-face meetings by government agencies or the private sector are not allowed when it involves the presence of external parties and are to be done through video conferencing instead.

Also allowed are Hari Raya Aidilfitri bazaars and night markets but with strict control such as crowd limits and a number system, while Ramadan bazaars will not be allowed starting May 8.

The list of allowed businesses include pet food shops and pet clinics, laundry shops as well as self-service laundry shops but with employees required onsite, optical shops, car wash centres, hairdressers and salons but only for haircuts.

Childcare centres, kindergartens, taska and tabika are also listed as being allowed to operate with permission from the related ministries, while daily care centres for those such as the disabled and senior citizens are also allowed.

Also allowed are in-studio recording activities such as for music, concert, filmmaking, talk shows with minimal crew and without audience and according to the creative industries SOP, while indoor busking within building premises, cafes, food courts and places that are not fully open-air are also allowed.

Driving institutes and aviation training centres are allowed to operate based on the Transport Ministry’s SOPs, while fishing is allowed during the MCO based on the Fisheries Department’s SOPs, the NSC SOPs said.

The SOPs also state that all economic sectors and businesses approved by the relevant ministries or agencies can operate throughout the MCO.

While interstate and interdistrict travel is not allowed for the six Selangor districts under MCO 3.0 (based on district borders by the state government), the SOPs said movement for the purposes of work will be allowed subject to registration or letter approving operations and employee pass or employer’s letter.

Those who are moving about on official government business have to have documents from their employers as verification, the SOPs state.

The same SOPs also said the capacity of staff for public services would be based on the Public Service Department’s circulars or orders, while also reiterating that the allowed number of employees at the workplace for the private sector would be 30 per cent of management staff as well as the total number of operation or support staff as determined by employers. 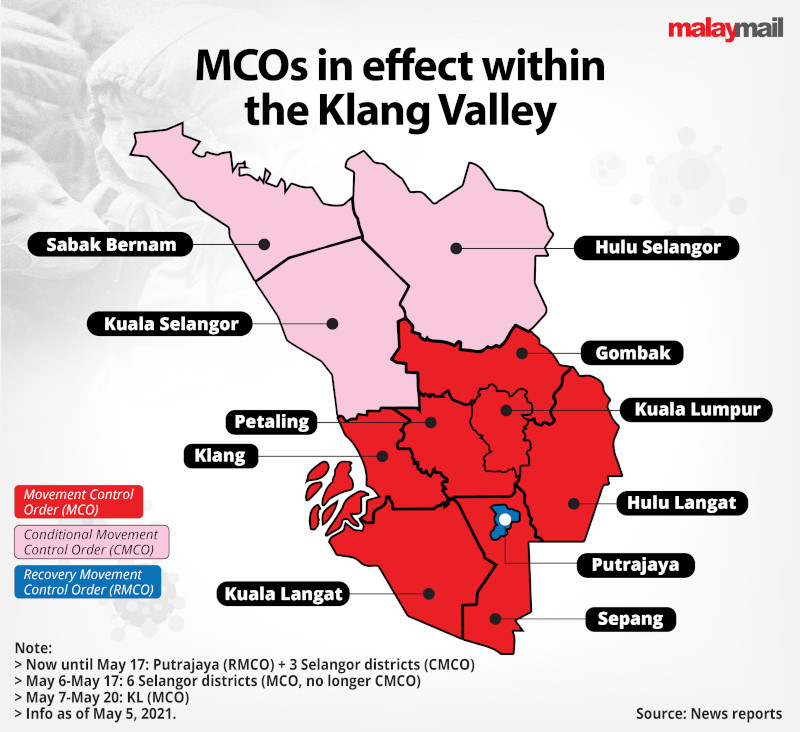