A nurse holds up a dose of the AstraZeneca Covid-19 vaccine at the World Trade Centre Kuala Lumpur May 5, 2021. ― Picture by Ahmad Zamzahuri
Follow us on Instagram, subscribe to our Telegram channel and browser alerts for the latest news you need to know.
By KENNETH TEE

KUALA LUMPUR, May 5 — The opt-in AstraZeneca Covid-19 vaccination programme today went smoothly as eager Malaysians numbering in the hundreds showed up to receive their first shot at the World Trade Centre KL here.

Based on observations by Malay Mail, the World Trade Centre Kuala Lumpur Covid-19 Vaccination Centre was filled with eager recipients, both local and foreign, of various age groups and backgrounds waiting for their turn in an orderly manner.

An enclosed seating area for the public was also provided outside of the Tun Hussein Onn Hall and Tun Dr Ismail Hall where the primary vaccination programme was conducted.

Minister of Science, Technology and Innovation (Mosti) Khairy Jamaluddin was also present for a tour of the vaccination centre, adding that there were 2,648 appointments scheduled for today.

As of 12.30pm, Khairy said some 648 people have already received their vaccination shots with the remainder to continue receiving theirs until the last appointment timeslot at 9pm.

For lab technician Muhd Faiz Mustaffa, he admitted that the AstraZeneca vaccine shots did initially cause slight concern and that his family were hesitant when it was offered as part of the mainstream National Covid-19 Immunisation Programme (NIP).

Travelling all the way from Gombak, the 31-year-old Muhd Faiz was the first in line in his family to be administered with the vaccine with his mother next on May 11 followed by his younger sister on May 15.

“I’ve read the reports of people rejecting the vaccine initially but at the end of the day, there are studies on the vaccine side effects so we were a bit cautious still.

“And it’s not just me but my mother and sisters have registered so there is no need for concern since the government has given assurance of compensation if anything happens,” Muhd Faiz said as he stood in line for his 12pm appointment. 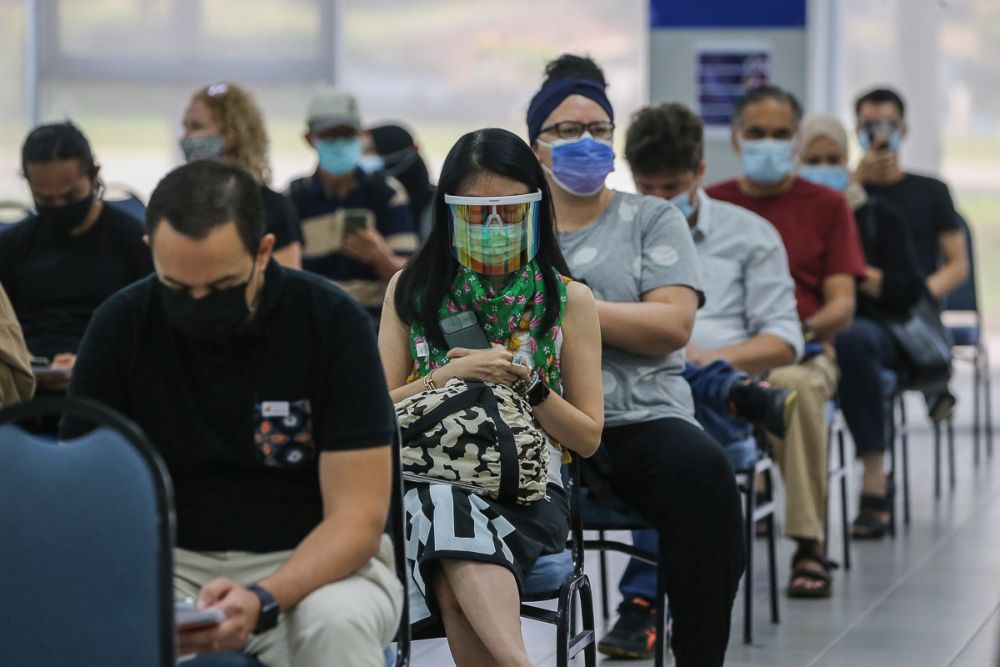 Members of the public wait to receive the AstraZeneca Covid-19 jab at Universiti Malaya, Kuala Lumpur May 5, 2021. — Picture by Yusof Mat Isa

Asked how he felt to be amongst those in Malaysia to receive the first batch of the AstraZeneca vaccine, Muhd Faiz said he felt anxious but excited at the same time.

Those who have been vaccinated expressed a huge sense of relief as well.

A 60-year-old retiree from Petaling Jaya who only wanted to be known as Lee said she couldn’t have felt better after obtaining her first shot but also expressed anxiousness prior to today’s 11am appointment.

“I feel safe!” she exclaimed happily after she was allowed home following a 30-minutes observation here for any adverse side effects.

She also complimented the professionalism of the medical personnel responsible for the vaccine administration, citing their politeness and efficiency in handling the crowd.

For spouses Andy Tan and Michelle Yam, the AstraZeneca vaccine was a means to safeguard themselves and others.

“As to why we choose this, well we did some research and found that if one has no underlying medical complications there shouldn’t be a problem.

“Side effects are always present in any vaccines taken. So for AstraZeneca, we want to get injected first to be safe,” Andy said, before urging the public to get themselves vaccinated if given the opportunity.

For Peter, a Dutch from Petaling Jaya who has been living in Malaysia for 16 years, he expressed indifference after the vaccination and said he felt exactly the same as before he received the shot.

“Maybe a little sting here, no problem,” the 49-year-old said as he gestured towards his arm.

Asked about why he opted for the AstraZeneca vaccine, Peter said all vaccines were the same and there was not much difference in the risks presented which he would take given the opportunity.

“Feeling happy? I don’t know if I’m happy. I hope sometimes in the future this will help me with a little more freedom.

“I’m done sitting at home. I want to go out. I hope that after I get second dose and travel passport they can let me travel. That’s the plan, I don’t want to wait till end year for this,” he quipped. 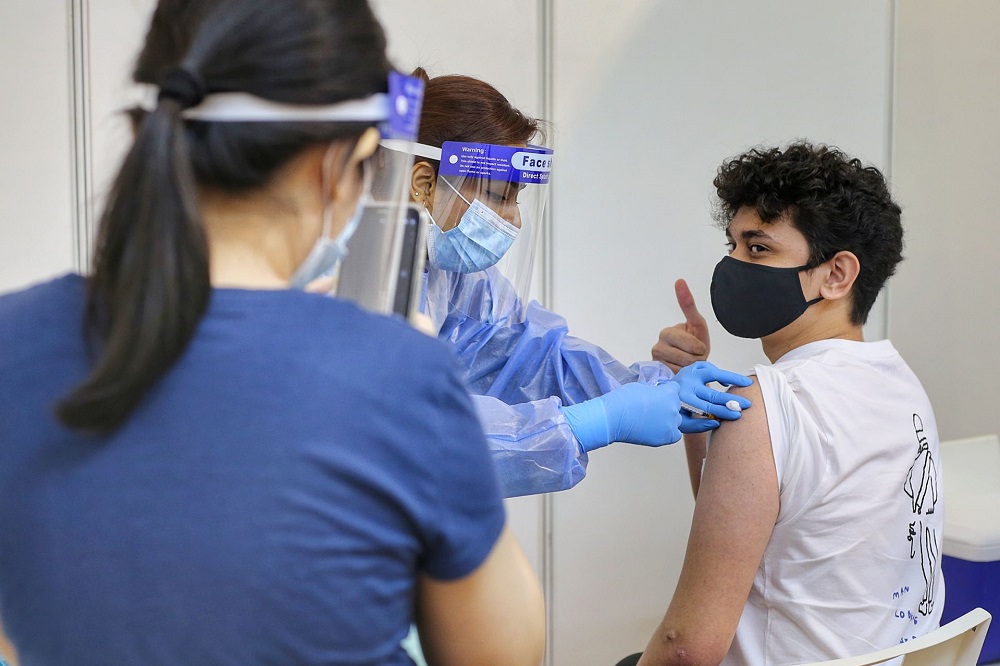 A man receives the AstraZeneca Covid-19 vaccine at the World Trade Centre Kuala Lumpur May 5, 2021. ― Picture by Ahmad Zamzahuri

The government announced a separate AstraZeneca Covid-19 vaccine programme last month after concerns emerged that the European-made vaccine could cause blood clots in very rare instances.

The AstraZeneca vaccines are available via separate appointments only, as opposed to the NIP — which currently prohibits registrants to choose between the Pfizer-BioNTech and Sinovac vaccines used in the programme.

Malaysia is expecting the arrival of some 1.1 million doses this month via the Covid-19 Vaccines Global Access or Covax.

This will be followed by another 610,000 doses from AstraZeneca itself in June, 410,000 doses in July and 1.2 million doses in August and September respectively.