In the survey by market research firm Ipsos, where 4,000 Malaysians were polled on over 100 brands locally, 65 per cent or two out of three Malaysians in the survey agreed that Petronas has been able to manage the crisis situation in 2020 best.

This is followed by Maybank at 62 per cent, EPF and McDonald’s both at 60 per cent, and Perodua at 59 per cent.

The survey results released by Ipsos today featured 4,000 face-to-face interviews with respondents representative of Malaysia’s population, with the poll conducted between June and November 2020 on more than 100 organisations in Malaysia. 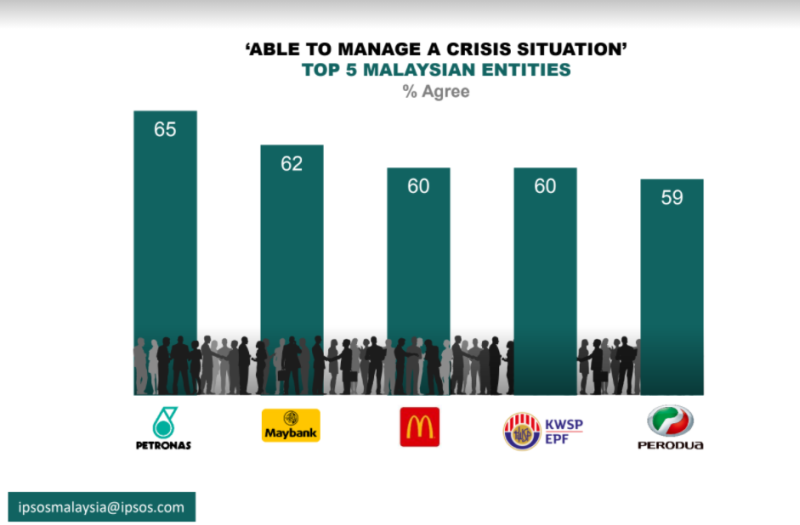 With these five organisations being very diverse in the nature of their business, Ipsos observed that this means that good crisis management is not limited to particular sectors.

The Ipsos survey instead highlighted key elements of crisis management that was seen in the five organisations, including honest communications.

During 2020 when organisations were constantly trying to adapt to new circumstances, the Ipsos survey found that Maybank and Pos Malaysia stood out for being “open and honest” in their communications with 67 per cent respondents saying so.

A total of 67 per cent respondents also said EPF stood out for its support of local communities, while McDonald’s scored the highest in terms of putting its customers first at 67 per cent, and 71 per cent associated Maybank with having a strong financial performance. 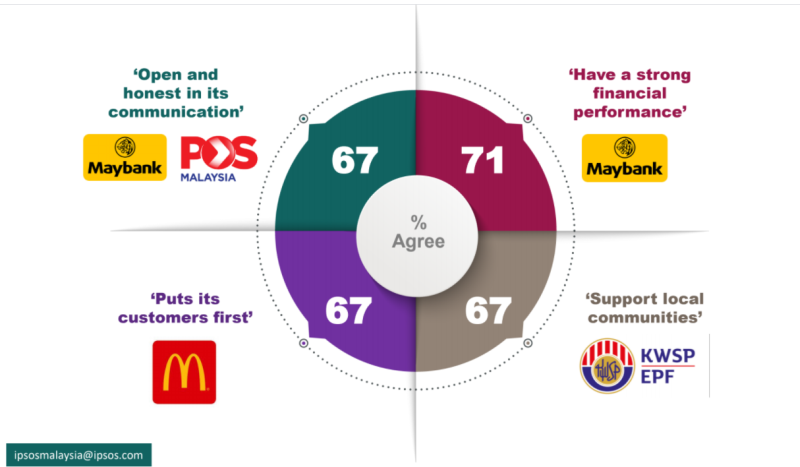 Arun Menon, the managing director of Ipsos Malaysia, noted that 2020 had “forced companies to respond to a crisis that no one saw coming, and many have taken quick and decisive actions”.

“From repurposing production capabilities to engaging in new and creative ways to support consumers, some companies have managed the crisis in a way that will enhance their trust among consumers and citizens,” he said in a statement.

Ipsos said it was important for companies to be authentic and relevant in times of crisis, in a way that is true to the company’s values and in line with its social purpose.

“For example, many companies have repurposed their capabilities to address particular needs during the pandemic.

“What companies say need to be aligned with what they do; if making a commitment, be sure to follow through,” it added.

Also in the same survey in Malaysia, almost half of the 4,000 respondents believed that government-linked companies (GLCs) and government regulators were able to manage a crisis better than companies in the private sector.

For the GLC category which involved 12 companies, a total of 49 per cent respondents agreed that they were able to manage a crisis.

Ipsos noted that the public expects companies to contribute to the Covid-19 pandemic recovery, but said that public organisations and private entities have been adapting to survive through the crisis such as re-engineering products, supporting government initiatives and changing communications strategies.

“GLCs and government regulators have been at the centre of the pandemic response, and the public have taken note of that,” it said. 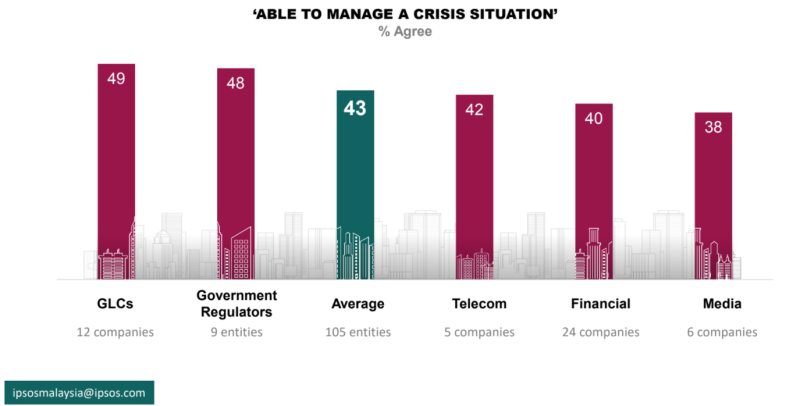