Witness Tan Sri Lee Kim Yew is pictured at the Kuala Lumpur High Court June 16, 2020. ― Picture by Miera Zulyana
Follow us on Instagram, subscribe to our Telegram channel and browser alerts for the latest news you need to know.
By IDA LIM

Lee, who was testifying as the 57th prosecution witness in Zahid’s money-laundering and corruption trial, said he and his wife Tan Bee Hong were shareholders of Bee Garden Holdings Sdn Bhd.

Lee said the sale of the two Country Heights homes, which bore the lot numbers 356 and 403, started when he was contacted in December 2016 by one “Datuk Eric”, whom he knew through his son.

This “Datuk Eric” later told him that Yayasan Al-Falah wished to make the purchase, he said.

After agreeing to sell both homes for a combined price of RM5,907,750 or approximately RM150 per square foot to Yayasan Al-Falah, Lee confirmed in court today that he had agreed to round down the price to RM5.9 million (Lot 356 for RM3 million and Lot 403 for RM2.9 million) for ease of calculations and because the houses were old.

Today, Lee confirmed he received a Maybank cheque dated January 4, 2017 from Lewis & Co for a lump sum of RM5.9 million for Bee Garden Holdings’ sale of the two bungalows to Yayasan Al-Falah.

Questioned by Zahid’s lawyer Datuk Ahmad Zaidi Zainal, Lee confirmed he is chairman for The Mines Resort, but declined to directly agree with the suggestion that he was known as a philanthropist who liked to make donations and do charity work.

When Zaidi asked Lee if he knew that Yayasan Al-Falah was connected to Zahid, Lee agreed.

Lee earlier concurred with Zaidi that the four houses were show units for Country Heights and had fallen into disrepair, while also recalling that they had a rough value of RM200 per square foot in 2017 when two of them were sold to Yayasan Al-Falah. Lee said the current market price of Country Heights properties would be between RM150 and RM250 per square foot.

When Zaidi asked if he knew the two homes would be converted for religious use or Islamic religious schools, Lee said: “I don’t know convert or not convert, but what I know when they bought these parcels of land, they are near the surau, and they are related to the surau.”

On whether all sales and purchase transactions for the two houses were “above board”, with “nothing illegal” or “sinister” involved, Lee was seen nodding thrice before saying, “Agree”.

Upon re-examination, DPP Sazilee asked Lee if anyone had told him at the time of the sale that the properties would be used for religious purposes.

“Datuk Eric did say this is because they were near the mosque, near the surau, and the buyer wanted to buy related to the conducting of religious affairs, but what they wanted to do, I did not ask,” he said.

To Sazilee’s question of whether he had reduced the prices as they were allegedly being purchased for religious purposes, Lee said the original price offered was merely a quotation and that it was just a normal practice to adjust the figure to RM5.9 million by deducting about RM7,000.

As Lee left the courtroom, Zahid was seen giving him the thumbs-up gesture.

Selangor Land and Mines Office assistant administrative officer Aslina Abu Hasan, testifying as the 59th prosecution witness, verified via documents that the ownership of the two houses had been transferred from Bee Garden Holdings to Yayasan Al-Falah. 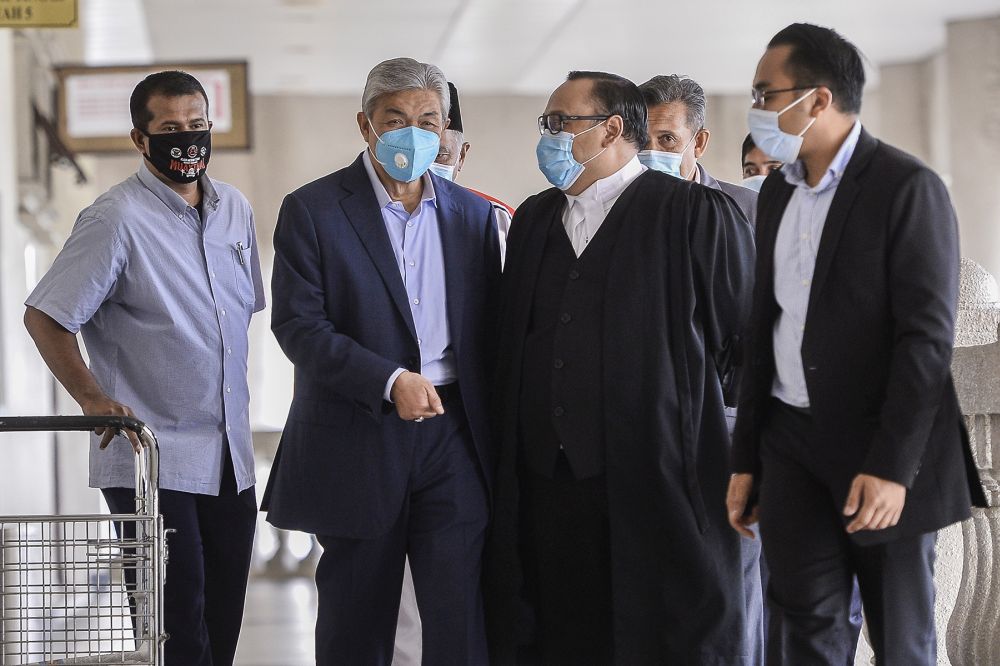 In this trial, Zahid is facing 47 charges, namely 12 counts of criminal breach of trust in relation to Yayasan Akalbudi’s funds, 27 counts of money-laundering, and eights count of bribery charges.

In the money-laundering charges, Zahid is accused of ordering the transferring of millions of ringgit in alleged illegal funds into fixed deposits via Lewis & Co’s clients’ account. A clients’ account is typically where law firms hold money as a trustee or on trust for their clients.

As part of the money-laundering charges, Zahid was also accused of having being directly involved in transactions involving proceeds from illegal activities by allegedly ordering for the purchase of the two bungalows worth RM5.9 million using a Maybank cheque issued from Lewis & Co’s clients’ account in Maybank.