For Pastor Raymond Koh’s family and friends, 1,000 days and counting

KUALA LUMPUR, Nov 17 — The despair felt by the family and friends of Pastor Raymond Koh is matched only by their frustration with the slow pace of government investigations nearly five months after the Home Ministry assembled a special task force into his forced disappearance.

At a remembrance event here last night, Koh’s wife Susanna Liew, said that despite the government announcement, the family remain in the dark about the progress of investigations.

Since September, Liew said the authorities have only visited her and her three children — Esther, Elizabeth and Jonathan — to ask the same questions asked before there was any real breakthrough in the case.

“I told them the questions are irrelevant. You should investigate his enemies, the one who sent Raymond two bullets in 2011, the one who sent me a white powder supposedly containing anthrax and a grave note telling they will kill us.

“The question is that after 1,000 days what has the police show for their investigation? Nothing,” she said at the event to remember Koh at a hotel here last night attended by some 100 people.

Liew looked calm, but her eyes shone with the determination to keep fighting for answers not only for her husband, but for others like activist Amri Che Mat as well as Pastor Joshua Hilmy and his wife, Ruth, who all disappeared in the span of three months of each other.

Koh was taken in broad daylight by a group of unknown men who surrounded his car on a public road in Petaling Jaya, Selangor on February 13, 2017.

Last April, the Human Rights Commission of Malaysia (Suhakam) announced that the Special Branch, the special police intelligence team from Bukit Aman, was involved in the abduction of pastor Raymond Koh, similar to that of Amri.

Faisol, who spoke for Amri’s family, recounted the frustration of the latter’s family as his friend’s mother wondered whether her son was still alive or dead.

He hoped the task force would provide them with some answers.

“We still hope that the task force will be able to solve this matter. Maybe the report will be out in December or January. We hope the report brings good news for us,” Faisol said.

Ignatius called upon the current PH leaders to stand up and demand that the case to be solved.

He said it is hypocritical that Malaysian leaders most of them are prominent human rights advocates themselves are condemning the atrocities against the minorities in other countries when there are still forced disappearances in this country.

“It is shocking as well that so many of the politicians who were once outspoken advocate for justice and human rights activists who were so vocal when they were in the Opposition now sit silently in the government benches.

“Where are their voices when it is most needed? Why do they looked the other way and pretend they didn’t notice that Pastor Koh is still missing 1,000 days after he was booked up?” he asked. 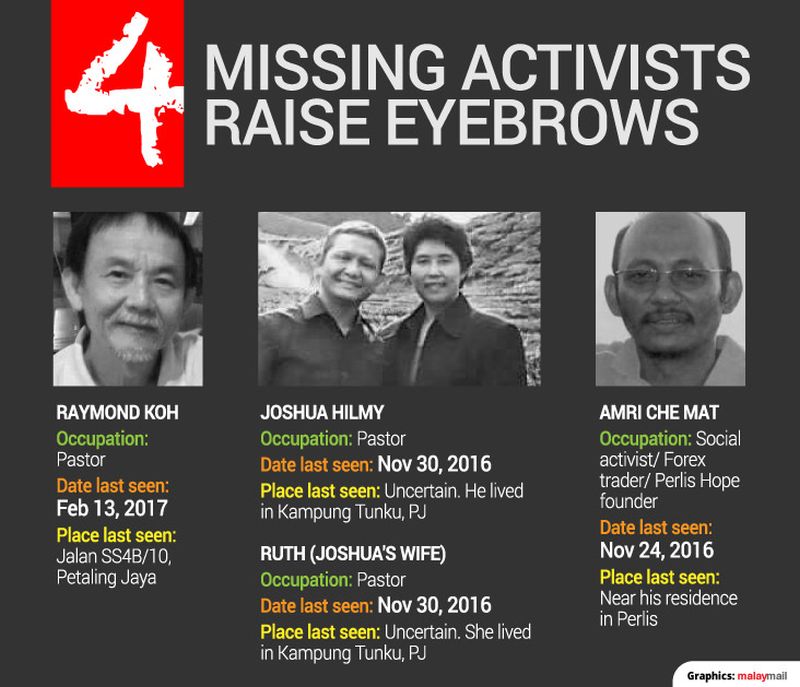