How much do minimum wage earners spend on groceries? Study shows 40pc is ‘average’

People buying vegetables at the Chow Kit wet market in Kuala Lumpur 26 January 2018. — Picture by Azneal Ishak
Follow us on Instagram, subscribe to our Telegram channel and browser alerts for the latest news you need to know.
By By JULIA CHAN

KUALA LUMPUR, Jan 17 — If you live in Malaysia on minimum wage, chances are nearly 40 per cent of your salary will go to groceries, according to a study by e-commerce firm Picodi released today.

In its report, Picodi said that a “frugal” shopping basket filled with average “basic food items” would cost about RM361.29, roughly 37.2 per cent of the net takeaway from the RM1,100 minimum wage imposed beginning January this year.

This ranks Malaysia in the bottom half of a 52-country scale, at 39th place, below even neighbouring Indonesia, for the lowest cost of “basic food items” compared to the minimum wage.

However, the basket which lists eight universal food groups like bread, milk, rice, eggs, meat, fruits and vegetables, also includes cheese, a non-staple food item in Asia and which may not be indicative of the average Malaysian household grocery list, nor how many people is it meant for.

“Even though this list is short and frugal, these products meet the nutritional needs of an adult and the prices are constantly monitored around the world,” said the report. 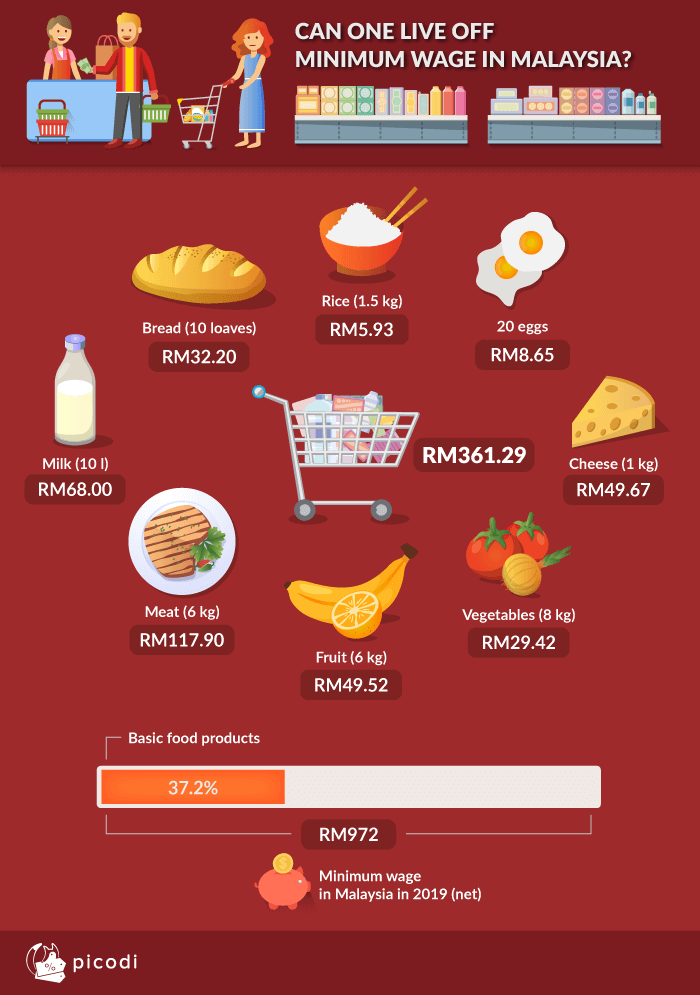 “According to our ranking, Australia, Ireland and the United Kingdom are countries where the minimum wages are the most favourable. Taking into account local prices, employees with the lowest possible remuneration will spend 7 per cent of their salary for the very same basket as people from other parts of the world.

According to the Picodi analysis team, the report uses minimum wages rates published on official government websites from 52 countries in Europe, Asia, the North and South Americas, Africa and Australia.

The food basket used in the report represents the average prices compiled by survey website numbeo.com. The full list of ranking can be found here.