Yesterday, Mujahid pledged in an interview that the PH government will shun enforcement seen as moral policing for areas under its jurisdiction and will instead pursue a policy of ‘compassionate Islam’. ― Bernama pic
Follow us on Instagram, subscribe to our Telegram channel and browser alerts for the latest news you need to know.
By By Ida Nadirah Ibrahim

Responding to requests for comment on Minister in the Prime Minister’s Department Datuk Mujahid Yusof Rawa’s statement that the federal government planned to stop so-called moral policing, they said such matters were the purview of the individual states.

Selangor Mufti Datuk Seri Mohd Tamyes Abd Wahid also told Malay Mail that such enforcement in his state was not abusive or invasive as suggested by the minister, insisting that it was executed using clear procedures.

“The enforcement will continue to be carried out as (Islamic laws) are enacted by state leaders, and this includes Selangor,” he explained.

Saying he was unclear how far Mujahid has gone with his proposal, he added that such decisions must be presented to the various religious authorities, including the Muzakarah National Fatwa Committee Council in Islamic Affairs before reaching the Conference of Malay Rulers.

Under the Federal Constitution, Islamic matters come under the individual Malay Rulers as the heads of the religion in each state. Negri Sembilan Mufti Datuk Mohd Yusof Ahmad also disputed the minister’s description of khalwat (close proximity) raids as invasive and exploitative, saying such action was justified as they were normally launched based on public reports.

He said enforcement officers were duty-bound to respond when reports are lodged, and could not pick and choose which they should investigate.

“For example, if a wife reports that her husband is up to no good at home, then the authorities have to come and take action against it. You cannot allow immoral acts to just happen and leave it be,” he said.

Rejecting the argument that such enforcement constituted an invasion of privacy, he asked if police could choose to ignore a reported robbery by deciding it took place inside a private residence.

Mohd Yusof said all Muslims were obligated to defend the community’s morality, just as the government and members of the public have a responsibility to act if they witness a crime.

This obligation also applied to Mujahid, he said.

“If the minister himself sees an immoral act taking place, then he has to use his power and take action against it and make the effort to curb it from happening.

“Therefore, if the officers are forced to stop such raids, then the government has to take up whatever risks that come with it or bear the sin from allowing vice practices to continue,” he said. 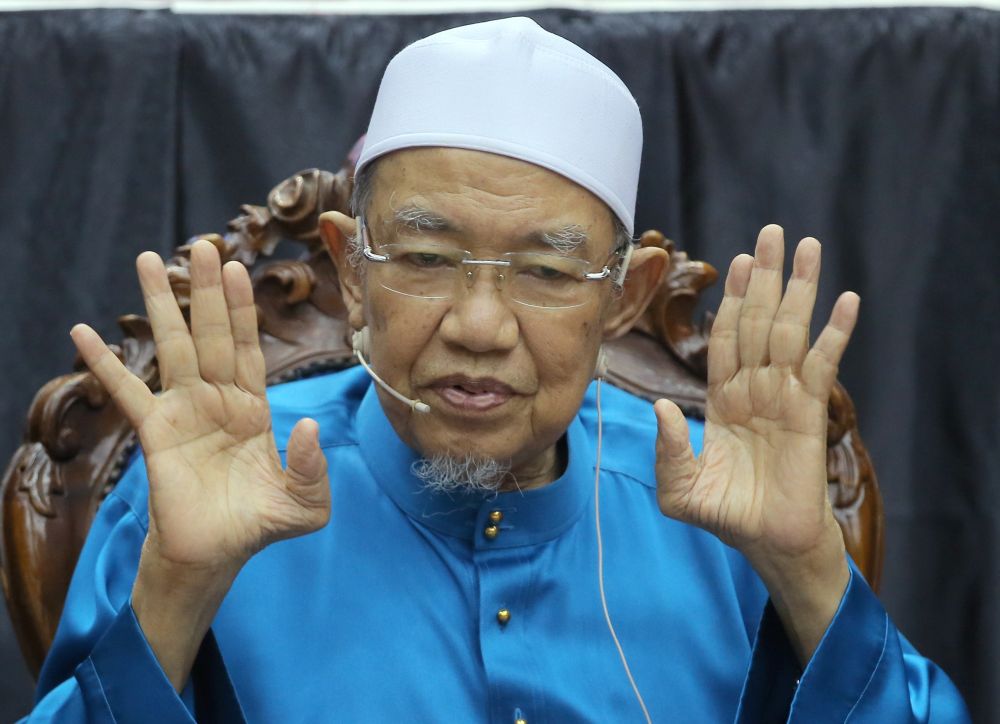 Perak Mufti Tan Sri Harussani Zakaria pointedly told the federal government to do as it pleases. ― Picture by Farhan Najib

Perak Mufti Tan Sri Harussani Zakaria pointedly told the federal government to do as it pleases and proceed with ignoring the states’ powers and laws to act against religious vices.

Harussani said he was not inclined to meddle in the federal government’s decisions, but stressed that it was compulsory for Muslims to curb immoral acts from mushrooming in the community.

“Up to them (government) what they want to do. If such raids cannot be carried out anymore, it is OK, I have no problem,” he said sarcastically.

“Even with such laws in place, vice practices cannot be curbed. If we stop the raids and allow them to take place freely, then we are at a loss and this will encourage more immoral activities to take place. Good on them.”

Mujahid pledged in an interview that the Pakatan Harapan government will shun enforcement seen as moral policing for areas under its jurisdiction and will instead pursue a policy of “compassionate Islam”.

He said the government has no intention to interfere in Malaysians’ private lives and will focus instead on matters that affect security.

The vice-president of Parti Amanah Negara acknowledged that such matters came under state jurisdiction, but said the government was engaging with religious agencies at the state level to convince them to adopt the stance of the federal administration.

Prime Minister Tun Dr Mahathir Mohamad backed Mujahid on the matter yesterday, saying Islam was not about climbing people’s fences to catch them in compromising acts.