KUCHING, Feb 27 — The Federal Court ruled today that the Sarawak Shariah Court has jurisdiction over the bid by four Sarawakians — a Malay-Muslim and three Muslim converts — to be officially recognised as Christians

“We have studied written submissions and arguments by from both parties and we found  that there is no merit in the appeals,” he said.

He added that while there is no specific provision in the Sarawak Shariah Court Ordinance 2001 concerning conversions into and out of Islam, there were provisions under the Sarawak Islamic Religious Council (MAIS) concerning such matters.

He said these existed under Sections 68, 69 and 70 of the MAIS Ordinance.

On the applicants’ legal question asking if the Shariah courts have jurisdiction over apostasy applications when there are no specific provisions in the Sarawak Shariah Court Ordnance 2001, Zulkefli said the answer was yes.

The four had sued the Sarawak Islamic Religious Department, MAIS, the National Registration Department (NRD) and the state government as respondents.

Syarifah Nooraffyzza, who embraced Christianity in 2009, is seeking court orders to compel the Sarawak Islamic authorities to issue her a release of letter from Islam and to compel her name change to Vanessa Elizabeth.

Jenny, Tiong and Salina are asking the court for an order to compel the NRD director-general to change their Muslim names to their original names on their official records and documents, as well as for their religion to be recorded as Christianity instead of Islam.

In 2015, the High Court had ruled that it had no jurisdiction to hear Muslim apostasy cases.

In 2016, the Court of Appeal similarly rejected their application for a judicial review to compel the four respondents to issue a letter of release to them as they are no longer practising Muslims.

The apex court’s decision was greeted by shouts from a large crowd outside dressed in black T-shirts.

Roman Catholic Bishop Simon Peter Poh was escorted by a group of youths to the Kuching High Court Complex car park, out of fear that he may be assaulted. 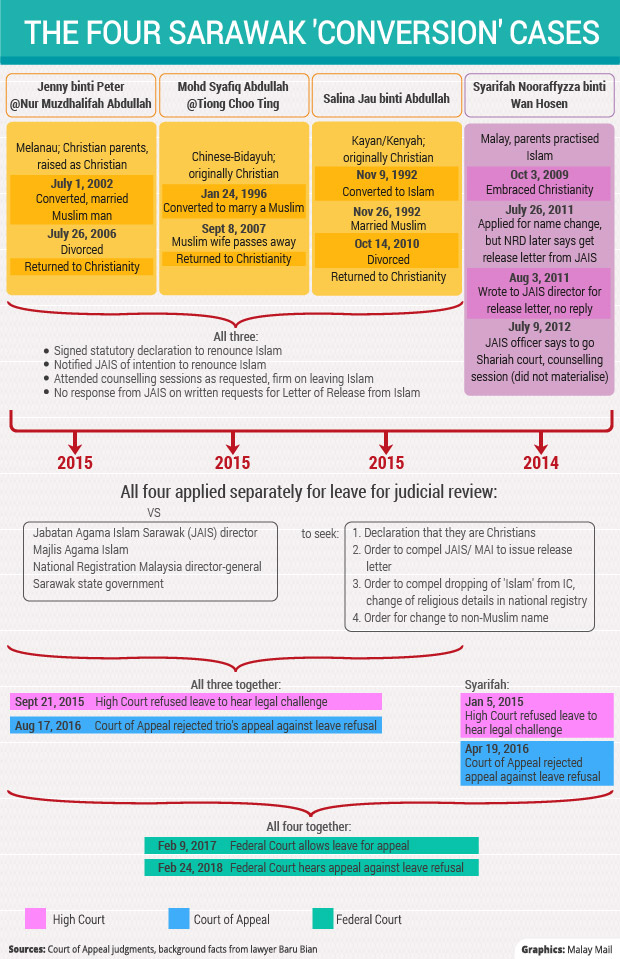