Health Ministry deputy director-general Datuk Dr Azman Abu Bakar said this was due to the mass movement during the Chinese New Year celebrations ― where many usually travel for family reunions.

“The widespread movement of population during the festive season, it can cause Dengue Fever infections to transmit more quickly if there are Aedes mosquitoes in their surroundings,” he said in a response to Malay Mail.

The ministry provided tips on preventive actions that Malaysians can take during this period, including ensuring that there are “no containers or potential grounds for Aedes mosquitoes to breed in their residence while leaving to their hometown”.

The ministry also advised Malaysians to apply larvicide material or abate into permanent water reservoirs, especially when they are not in use for over a week.

They should use aerosol spray to kill adult mosquitoes while inside the house, and use mosquito repellents on their exposed body parts during the mosquitoes' active biting periods of 5am-7am and 5pm-7pm, the ministry said.

They should also avoid going to areas with dengue outbreaks or dengue hotspots, with the list of such locations readily available from the iDengue mobile application or the iDengue website. Hotspots are where the dengue epidemic exceeds 30 days from when it first started. 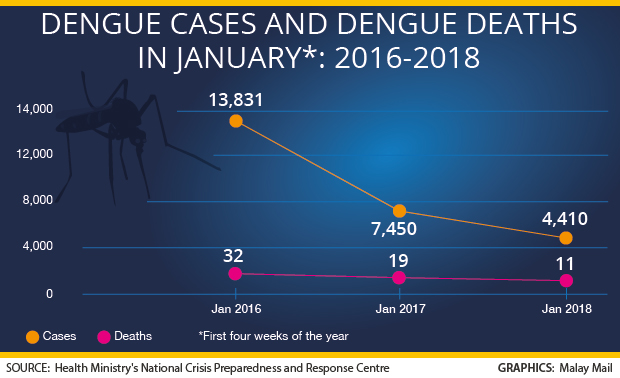 Why the numbers have gone down

The latest Health Ministry data had showed Malaysia recording 11 deaths from dengue during the December 31, 2017 to January 27, 2018 period, which is lesser than the 19 dengue deaths and 32 dengue deaths recorded in 2017 and 2016 for the same first four weeks of the year.

Dr Azman explained that such a reduction was due to a concerted and continuous efforts from previous years until now from various ministries, agencies and the communities in acting proactively to prevent and control dengue.

“Most states are actively doing search and destroy activities which will reduce Aedes breeding grounds. This activity will have a positive impact in reducing Dengue disease transmission,” he said.

On the downward trend of the annual numbers of dengue cases and deaths for Malaysia, Dr Azman again attributed this to the integrated action from ministries, agencies, communities and individuals.

He noted that the National Dengue Special Task Force ― which is composed of seven ministries and agencies ― was formed in July 2014 to mobilise agencies and communities to carry out dengue prevention and control activities.

“Various activities have been conducted such as Gotong-royong Mega twice per year and collaborative enforcement operations between KKM, CIDB, local authority and DOSH,” he said, referring to the Health Ministry, Construction Industry Development Board and the Department of Occupational Safety and Health by their initials.

“The implementation of Dengue Prevention via National Blue Ocean Strategy (NBOS) has shown it can reduce cases, outbreaks and dengue deaths,” he said. 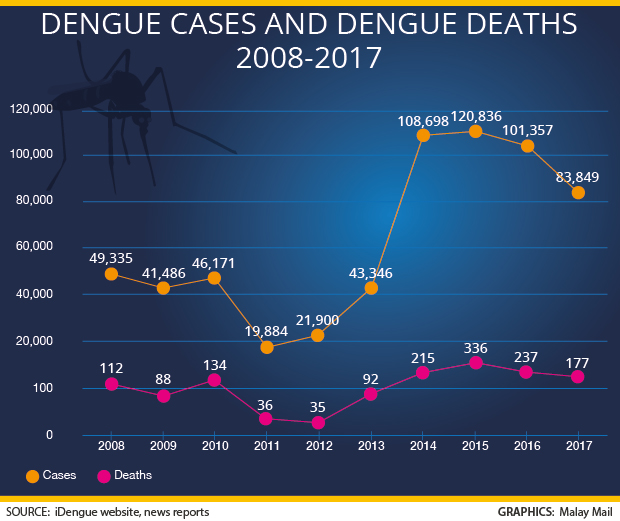 Dengue deaths declining, but be alert

Indicating that Malaysians cannot take the risk of dengue lightly, Dr Azman said: “Malaysians have to always be on guard and not be complacent. We are all at risk of being infected by Dengue and even die because of it.

“We need to continue ensuring our surrounding is free from Aedes breeding grounds and this is best achieved through continuously maintaining a clean environment,” he said.

He noted that multiple organ failures are “still occuring and represent around 55% to 58% of Dengue deaths in Malaysia in the years 2016 and 2017”.

In 2015 when dengue cases and deaths had a huge spike, Malay Mail reported the Health Ministry.as saying that there was a shift in symptoms by dengue patients to severe dengue such as organ failure. The ministry later said the more severe symptoms ― including brain infection, liver failure, hepatitis ― could be because of former dengue patients being infected the second time with a different dengue virus strain.

Dr Azman also said the number of dengue cases is expected to go up due to a change in the prevalent dengue virus strain or serotype in the country, with groups in the population yet to be exposed to this serotype and thus lacking immunity to it.

“With the latest serotype shift that occurred late last year in 2017, from serotype DEN-3 to DEN-2 at the end of 2017, it is expected that dengue fever cases and deaths will increase after one (1) to three (3) months,” he said, adding that Malaysians should therefore from now on ramp up dengue prevention activities such as by cleaning their surroundings and eliminating breeding grounds for the Aedes mosquitoes.

Infection with one dengue serotype will only give the patient who has recovered lifelong immunity to that particular strain, as well as a short-term immunity for other dengue virus strains.

“People are advised to immediately seek treatment if they experience signs and symptoms of Dengue fever such as fever, muscle aches and joints, back pain and rash. Early detection and treatment will save lives,” he said.