According to Datuk Dr Khairuddin Aman Razali, the three offences — “zina” (illicit sex) for unmarried Muslims, “qazaf” (false accusation of zina), and consumption of alcohol — are already governed by Shariah criminal offences enactment in all states.

“For information, with the proposed amendments, [the punishments for] three Shariah offences already listed as Shariah crimes in each state’s Shariah Criminal Offences enactment can be increased according to real Shariah laws,” the Kuala Nerus MP said in a statement here.

The “real” punishments, according to the Ulama wing information chief, are 100 lashes for zina among unmarried Muslims, 80 lashes for qazaf, and 40 to 80 lashes for drinking alcohol.

Khairuddin did not use the word “hudud”, but the three punishments are consistent with Kelantan’s amendment in its Shariah Criminal Code (II) Enactment (Kelantan) 1993 passed by its state legislative assembly in March last year to pave way for hudud. 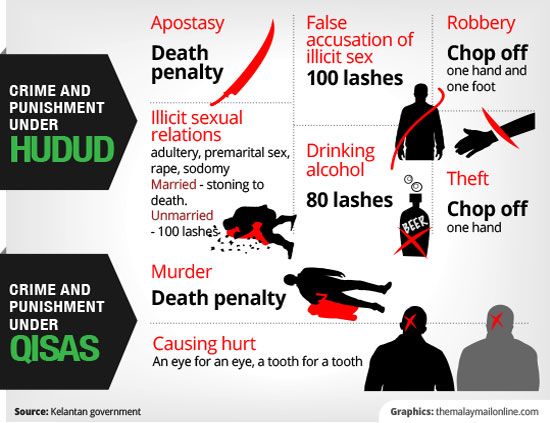 Khairuddin also reminded the public that the Syariah Courts (Criminal Jurisdiction) Act 1965, also known as Act 355, that Hadi’s Bill aims to amend, has already gone through one amendment in 1984 to increase punishment limits from just six months’ jail and a RM1,000 fine.

PAS president Datuk Seri Abdul Hadi Awang read Thursday his motion for the amended version of his private member’s Bill to amend Act 355 in a bid to expand the punitive powers of the Shariah courts, but he deferred it to the next time Parliament convenes in 2017.

The amended version of Hadi’s Bill seeks to increase the Shariah punishment ceiling to 30 years’ prison, a RM100,000 fine and 100 lashes of the cane. Shariah courts are currently only allowed to mete out a three-year jail sentence, a RM5,000 fine and six strokes of the cane.

In the past week, Zahid had staunchly denied that the Bill is an attempt to sneak in hudud, and is merely an attempt to upgrade the Shariah courts.