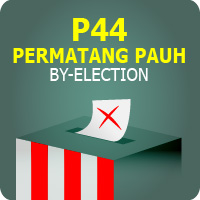 She not only won again the federal seat vacated — again — by husband Datuk Seri Anwar Ibrahim’s disqualification, but managed to come within 3,000 votes of his margin of victory in Election 2013 even with the much lower voter turnout of 74 per cent.

But despite the win, PKR’s campaign was far from smooth, wracked at first by a threatened PAS boycott and, later, foundered as locals grew bored of the party’s repeated criticism over the Goods and Services Tax (GST).

Here are the three things we learned from the Permatang Pauh by-election:

After 17 years under PKR and more before that under Anwar, Permatang Pauh was billed as a party stronghold.

And PKR campaigned exactly as though the by-election’s outcome was all but certain.

It declined to put forth an election manifesto for the poll, insisting that the Pakatan Rakyat (PR) manifesto for Penang during Election 2013 sufficed.

While BN arrived with detailed pledges for progress and development, Dr Wan Azizah banked her entire campaign on sympathy for Anwar’s jailing and public unhappiness with the GST.

But it soon became apparent that neither issue resonated with the locals, and while GST was the topic du jour both here and elsewhere across the nation, people longed for something more substantial than just criticising the government.

Alarm bells were also set ringing when a DAP lawmaker warned PKR over his own party’s unexpected reversal in last year’s Teluk Intan by-election, suggesting that defeat was far from unthinkable.

It was a brief scare in the end, albeit one that PKR cannot ignore the next time it goes up against BN.

For BN, the takeaway from Permatang Pauh was more disheartening.

During the course of campaigning, it sent minister after minister to help chip away at PKR’s support, and despite what Suhaimi described as “positive” response from voters and Kepala Batas MP Datuk Seri Reezal Merican Naina Merican’s claim of penetrating into “dark areas” previously hostile to BN, the coalition still could not make a race of it.

Given the tepid response at some of PKR’s ceramahs and the final result, sentiments clearly have not swung back towards BN’s favour since the divisive Election 2013.

Rather, unhappiness over policies such as the GST and the continuing controversy over 1Malaysia Development Bhd (1MDB) appears to entrenched discontent with BN.

A more worrying reading of the campaign is that the blasé response to PKR’s railing against the GST and 1MDB was not a sign of voters’ lack of interest, but of the saturation that the two topics have reached.

Sure, voters may not have seen viable policies being offered by PKR, but that was outweighed by their general distrust of the BN government.

For most, it was simply choosing between the lesser of two evils.

3. Rocky road ahead for Pakatan Rakyat

In Permatang Pauh, the corollary of the open hostilities between PKR-DAP and PAS over hudud was laid bare.

Before the campaign even started, local PAS leaders began to work against PKR, going so far as threatening to boycott the campaign and trying to claim the spot for their own.

Matters were not helped when PAS president Datuk Seri Abdul Hadi Awang refused to overrule the possible boycott by members unhappy with PKR’s censure against him over the Islamic penal code.

A boycott, had it materialised, would have been disastrous for Dr Wan Azizah in the Malay majority constituency.

Although the boycott was eventually averted when PAS national leadership finally stepped in to mediate, fears lingered that disgruntled members of the Islamist party might withhold support and put Dr Wan Azizah at risk of a shock defeat.

“It doesn’t mean that it’s all hunky dory for the opposition,” Fui K. Soong, a director at the Centre for Strategic Engagement was quoted as saying by Bloomberg.

“The cracks are there and it’s very clear.”

With Hadi set to continue his push for hudud in Parliament this month and with the temporary distractions of the by-elections here and in Rompin over, PR’s future remains as murky ever despite Dr Wan Azizah’s victory.