KUALA LUMPUR, March 19 — Malaysians are increasingly becoming disenchanted and tired of Pakatan Rakyat (PR) because they seem to have made little headway since the 13th general elections, political observers noted.

Social media analyst PoliTweet.org pointed out that interest in the federal opposition coalition on Facebook has reached an all-time low since June 2013, which observers said might have been caused by political fatigue.

“There is a kind of cooling point of interest among the members of the public. In the wake of the 2013 election, there is a sense of disappointment among some people supportive of the opposition because they didn’t win,” said Ibrahim Suffian of independent pollster Merdeka Center.

“By 2014, it descended into chaos as the parties went into internal election mode, and subsequently, the Selangor crisis… the opposition was in disarray.”

The study by PoliTweet.org showed that Facebook interest in PR was only at 10.26 per cent in March this year, compared to its peak at 41 per cent in August 2013.

Since then, however, the opposition pact has been plagued by divisive issues, including the Selangor mentri besar crisis last year triggered by PKR and DAP’s push for local government elections.

The latest crisis came as Kelantan PAS passed an amendment to its controversial Islamic penal code of hudud, prompting DAP to once again reconsider its alliance in PR.

“This certainly reflected the decline in public interest and the feeling of disappointment among young workers and the Twitter-going people,” offered Ibrahim.

Shahnon Mohamed Salleh, a lecturer at the Faculty of Communication and Media Studies, Universiti Teknologi Mara, suggested that the public are tired of witnessing politicians fighting among themselves, while offering little or no solid solutions to real issues or problems that affect the public.

“The decline in interest towards Pakatan is understandable, logical and expected,” said Shahnon, whose research focuses on social media and political communications, in a brief email interview.

“In a way, it is a reflection of the deep cracks and disunity among the three Pakatan partners especially between PAS and DAP.”

Local political commentator Ezra Zaid, however, suggested that the waning interest does not reflect real support of PR, insisting that the Internet-savvy public has always maintained their interest in political issues.

“The opposition has been using social media much longer, since the 2008 general elections. By using that platform for much longer, it has perhaps reached its plateau,” Ezra said, comparing PR to BN that only started its social media push prior to 2013.

“You have a very savvy social media user in the youth minister as well. That has played a part in at least getting BN voters on board these platforms and engaging on that front,” he added, referring to the Youth and Sports Minister Khairy Jamaluddin.

In comparison to PR, interest in BN on Facebook has risen from 23 per cent in August 2013 to around 33.33 per cent in March this year.

Despite the numbers, Ibrahim highlighted that political interest might be cyclical, and it is not impossible that PR might see the public’s interest and support return in the next general elections.

“This thing is cyclical, it is a dynamic situation. Things ebb and flow. There was feverish political activism leading up to the 13th general elections, and expectedly people also became tired after they failed to capture Putrajaya,” said Ibrahim. 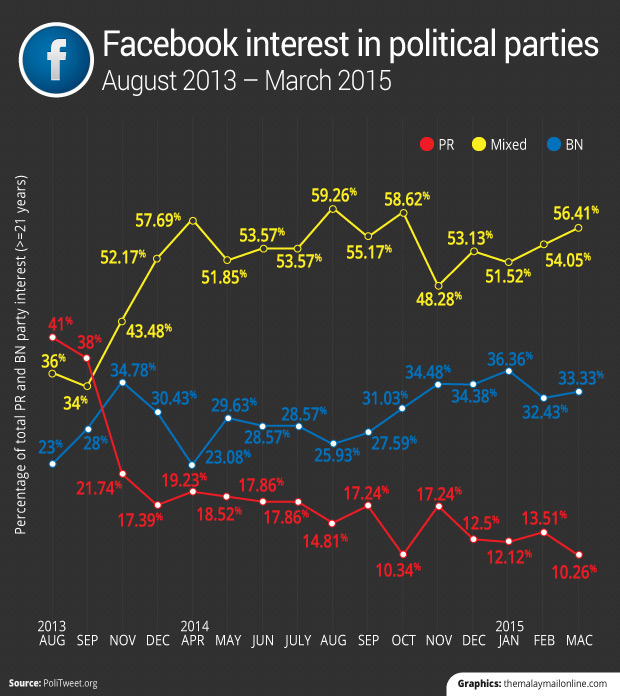