Looking at the ‘homeless generation’

KUALA LUMPUR, Sept 30 — Liow Mei Fong is 31 but is resigned to the fact that she will be living with her parents for a while longer as she simply cannot afford to own her own home in the Klang Valley.

An account executive, she earns about RM5,500 a month and has been looking at condominiums in the city and neighbouring Petaling Jaya (PJ), but noted that new units cost about RM450,000 for 1,000 sq ft which is beyond her budget of RM400,000.

”I am quite resigned to the idea of never owning a house,” Liow told The Malay Mail Online in a recent email interview.

”I think we are heading to just renting for life... would be nice if I can afford one without a 30- year loan or to have my next generation pay it off,” she added.

Liow’s problem is typical of her generation’s, as people in their 20s and 30s are forced to continue staying with their parents instead of paying expensive rent.

They are simply trading their independence and privacy in order to save up for a deposit when they want to buy their own home in the future.

Chang Kim Loong, honorary secretary-general of the National House Buyers Association (HBA), said that the average price of a condominium unit in the Klang Valley is RM500,000, noting that one needed to have a five-figure monthly household income of between RM10,417 and RM13,889 to afford such properties.

”Affordable” and “moderately unaffordable” homes are defined as costing below three times, and between 3.1 and 4.0 times one’s annual household income respectively, according to the housing affordability rating recommended by the World Bank and the United Nations.

”In an ideal world, we should be buying at properties deemed as ‘affordable’, which is up to 3.0 times the annual household income. However, that could be challenging and HBA would recommend that aspiring house buyers buy something that is higher than ‘moderately unaffordable’,” Chang said in a recent email interview.

He also pointed out that based on the average monthly household income in Kuala Lumpur (KL) and Selangor—which are RM8,586 and RM7,023 respectively, according to the Department of Statistics—people can only afford to buy homes costing between RM309,096 and RM412,128 in KL; and between RM252,828 and RM337,104 in Selangor.

”When was the last time you saw a new property with a KL address...(or a) Selangor address launched at the above prices?” questioned Chang.

Chang also noted that the average monthly household income in KL and Selangor is calculated based on earnings from two working spouses.

”That would mean that single people would never be able to afford to buy their own properties, thus compounding the risk of a homeless generation,” he said.

However, even with a combined income, some married couples cannot afford to move out and start their new life together.

Juliana Ahmad (not her real name), 28, got married two years ago and has a daughter aged below two years, but the senior media planner and her husband and child are still living with her parents and her sister in Taman Melawati, KL, in a single-storey house.

Juliana and her husband, who works as a journalist, have a gross household income of about RM10,000 a month, but are unable to find landed property in the city or in Petaling Jaya costing below half a million ringgit.

Juliana admitted that there are affordable houses in the outskirts of the Klang Valley, such as Klang, Cyberjaya and Nilai, but pointed out that living in such locations—far away from their work places in Damansara Uptown and Bangsar—would increase the cost of transport, which has already gotten more expensive with the recent fuel price hike.

“Yes, I can get a cheap house but have to spend more on traveling. So, no point,” said Juliana, who did not want to reveal her name due to strict company policy on talking to the media.

“We considered renting a house, but it costs as much as your repaying a housing loan. That’s how we ended up staying with my parents,” she told The Malay Mail Online.

Juliana pointed out that a house which is almost three decades old in her neighborhood costs at least RM800,000, due to its proximity to the Middle Ring Road 2 (MRR2) and the light rail transit (LRT) station.

Juliana, who owns a smartphone and drives a Japanese car, sighed when asked when she could foresee herself owning a home.

Calvin Lim (not his real name), 25, also drives a foreign car that costs RM83,000 and has to pay RM800 a month for his car loan, compared to a monthly loan repayment of RM500 if he were to purchase a local car.

“I don’t regret buying my car, but I would have bought a Myvi if I could go back in time,” the PR manager, who wanted to remain anonymous, told The Malay Mail Online.

Lim noted that RM300 a month would make a difference in the long run, even as he is hoping to move out from his family home in Damansara Jaya and have a place of his own by age 29.

Lim, who earns a monthly gross salary of RM7,000, said that new condominiums in desirable locations in the Klang Valley like Damansara Perdana, Puchong and Aman Suria cost at least RM700,000 for 1,200-sq ft units. Units as tiny as 700 sq ft are going for RM400,000.

“Half a million for a regular condo—it’s ridiculous,” he said.

The PR manager pointed out that affordable condominiums costing below RM400,000 are either “crap”—as they are inhabited by foreigners or blue collar workers and have high crime rates—or are located in distant places like Putrajaya and Cyberjaya, far away from his workplace in the city centre and from his friends in PJ.

“Technically speaking, I can own a home, but I can’t own a home in the place I want,” said Lim.

“If it’s cheap, it’s not decent—mostly flats. If it’s in PJ, it’s decent, but it’s not cheap,” he added, stressing that by “decent”, he meant a regular condominium with “not too many dodgy people around”, not a “swanky” place.

Lim described owning a home as a “personal achievement”, the “highlight of your life”, the next natural step after working for three years and buying a foreign car.

“The places that I want to stay in, I can’t afford right now... you can buy outside the Klang Valley and rent it out, but deal with the headaches of tenants,” he said.

Lim related horror stories about some of his friends who had bought condominium and flat units in Setapak and Kajang, and rented them out to tenants who either ran away, or turned out to be a triad member in the underworld.

“He cut the water because (the tenant) didn’t pay rent for two months, and he got death threats—calls and SMSes. Five months, he didn’t pay rent... and then only after three months, the police took action,” Lim said about the Kajang incident. 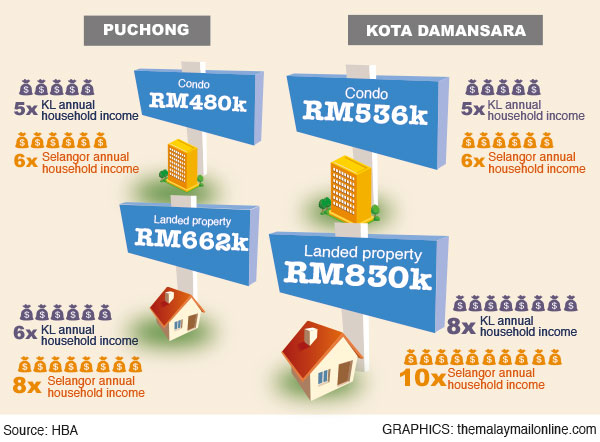 In the Setapak case, Lim said his friend’s tenant was three months’ behind on rent, forcing the friend to cut off water and electricity supply.

“So they painted the walls red, broke the toilet seats, stole small shit from the house, like pipes, shower heads,” Lim recalled. “The fellow just left.”

He added that though plenty of his friends are still living with their parents because they can’t afford their own home, the ones who bought property did so either after getting married, or by getting their parents to chip in.

Chew Kian Sang is one such parent.

The 63-year-old, who set up an engineering company in 1995 that produces machines to process palm oil waste, gave RM300,000 each to his 29-year-old son and 33-year-old daughter to help them purchase a home each.

“We, as parents, have to prepare from day one to save this amount of money for this purpose,” Chew said.

“The most important thing is that these young people have to start from somewhere. Being bogged down by installments and cars, it might take them a few years to do something on their own,” he added.

Chew’s son, who got married a few months ago, had to take a 35-year housing loan to pay for the remaining RM380,000 for a double-storey house in Section 17, PJ, that is more than 20 years old.

Chew said that his daughter, on the other hand, is a permanent resident in Singapore who bought a condominium unit in the island republic after getting married there.

When asked if property was currently unaffordable for young people, compared to three decades ago, Chew disagreed, noting that salaries back then were lower.

“It’s just that, the young generation today—their mindset is they want everything to be convenient,” he said.

”Then they realise, to stay in this area, this is the price you have to pay. So, it’s not true to say that property is not affordable for the young,” added Chew. “When you talk about property not affordable, yes, for PJ and KL. But if you go to Semenyih, Kajang, I believe those properties are affordable.”

When asked why he did not let his son buy a cheaper home on his own elsewhere, Chew stressed that he wanted to give his children a leg up in life.

Chew also noted that young adults might be influenced by peer pressure to live in more upscale locations, instead of “old areas” like PJ Old Town.

Chew’s observation appears to hold true. For Liow, Lim and Juliana, living in the outskirts of the Klang Valley - -far from their places of work and circle of friends—is unimaginable.

They say that property prices nowadays are “crazily inflated” and “absolutely ridiculous”, stressing that purchasing a home in distant locations will only raise transport costs and isolate them from friends and family.

Living in KL or PJ should not be a luxury, the young adults maintain, as it is not prestigious addresses that they are looking at, merely “decent” homes. Their desire to stay close to the city centre, however, appears to be influenced by other lifestyle choices, such as sipping an RM10 latte at an indie cafe in Bangsar over the weekend, owning a smartphone, or driving a foreign car.

A social outing once or twice a week costs about RM50 each time, Liow and Lim say. A fortnightly family dinner for two at a Western restaurant in a shopping mall costs between RM150 and RM200, according to Juliana. Liow also sets aside RM300 every month to go on vacation or dive trips.

But Lim, who sells insurance on the side, is optimistic about buying his first home before he turns 29.

“Different business opportunities may open. So, there’s not only one source of income,” he said.