Community projects and ‘collabs’: How Bangkok’s fine dining chefs are redefining themselves

This is kaeng pa pla or fish jungle curry. Half of the bento contains this aromatic and spicy curry; the other two sections hold the purplish-black riceberry and steamed vegetables. Florets of broccoli and cauliflower; wedges of pumpkin.

A complete meal, albeit in the form of a microwavable bento.

Would it surprise you to learn that this grab-and-go meal was crafted by the executive chef at a two-Michelin-starred restaurant and winner of Iron Chef Thailand?

For most of us, fine dining or haute cuisine has long been associated with the elite or extreme gastronomes.

These are the sort who would make reservations two years in advance (for it could certainly take that long to nab a table) and fly halfway across the globe to Copenhagen, Denmark for a meal at Noma, once ranked as the best restaurant in the world by Restaurant magazine. 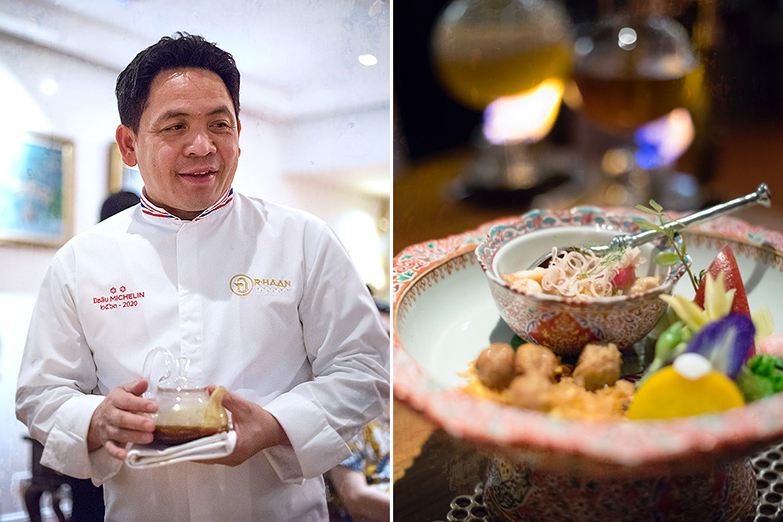 Perhaps these are merely well-heeled gourmands, ardent followers of Noma founder chef René Redzepi? But we have seen this closer to home too, up north in the Land of Smiles, particularly after the first-ever Michelin Guide Thailand was unveiled in 2017.

The contrast of street food vendors in a congested soi and the ironed white tablecloths of Michelin-starred restaurants in Bangkok couldn’t be greater.

Sure, many of the patrons were affluent Bangkokians and expatriates but tourists on a fine dining food crawl contributed to the bottom line too.

Then the pandemic happened. Flights were cancelled and borders closed. Over the past year and a half, many of these restaurants have struggled. Some, such as the formerly one-Michelin-starred Bo.Lan, have shuttered. The chefs who have weathered the storm, whose restaurants remain open, are now the stalwarts of Bangkok’s fine dining scene. The harsh times have also presented them with an opportunity to redefine themselves and how they might reach out to a wider audience.

Take Chef Chumpol Jangprai, executive chef at the two-Michelin-starred Thai restaurant R-Haan. His simplified yet dignified take on kaeng pa pla is part of his collaboration with the Chef Cares Foundation, a ready meal project where 100 per cent of the profits go directly towards the foundation’s charitable activities.

Chef Cares was founded in March of 2020 by Marisa Chearavanont, roping in over 70 of Thailand’s top chefs as well as corporate sponsors to donate nutritious meals to the country’s Covid-19 frontliners.

This meant that Chef Chumpol’s delectable fish jungle curry had to have more than exquisite flavour; the riceberry and vegetables upped the nutritional value of the meal, which makes it quite a find at the local convenience store.

It’s quite a change from Chef Chumpol’s standard fare. When I last dined at R-Haan (prior to the pandemic), I was delighted by dishes such as kaeng hang lay, a Northern Thai curry with Kurobuta pork, and charcoal grilled Thai Royal Project pheasant with Sichuan peppercorns.

But perhaps not. I remember how affable and attentive Chef Chumpol was, taking the trouble to visit every table and have a chat with his patrons. This is someone who cares about the well-being of others, so it makes sense that he would search for a way to give back. 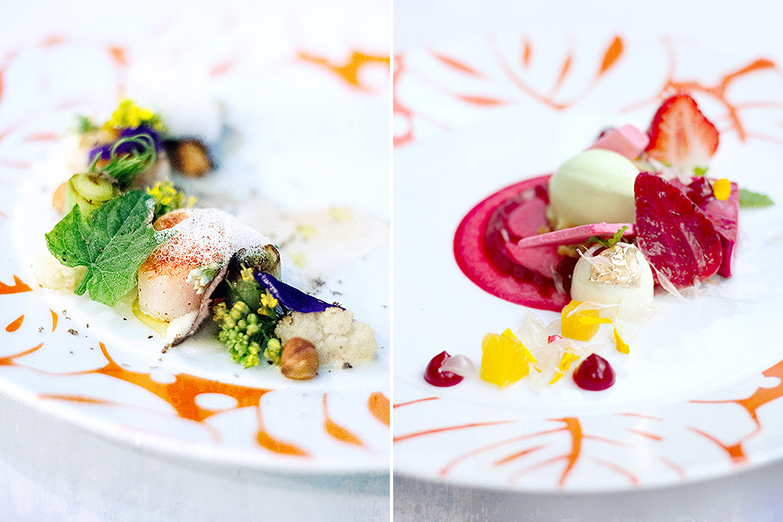 The exquisite dishes at Savelberg, a one-Michelin-starred restaurant in Bangkok.

Another chef who is participating in the Chef Cares Foundation’s ready meal project is Chef Henk Savelberg, originally hailing from the Netherlands. Executive chef of his eponymous one-Michelin-starred restaurant, he remains the only Dutch chef to be awarded a Michelin star in five different restaurants.

A master of French fine cuisine, there’s still much of the typical Dutch in Chef Savelberg – disciplined, practical and thrifty. So it makes sense that his Chef Cares meal is a substantial and no-nonsense dish: tender pork in rich cream sauce with macaroni.

Again, this seems a far cry from the elegant creations served at Savelberg (which has moved from Wireless Road to its new location on Soi Yen Akat 2): the daintiest courses such as foie gras encased in brioche pastry and warm oysters with sage-infused cream, all served on startlingly white plates with swirls of orange, the Dutch national colour.

But one gets the feeling Chef Savelberg would relish the pork and macaroni just as much, especially on a busy day when comfort food is just the balm we all need. 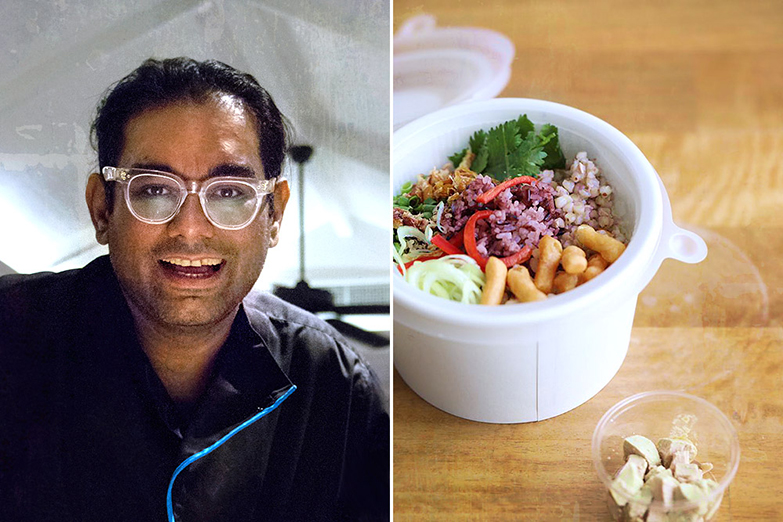 Chef Gaggan Anand has partnered with Greyhound Café and GrabFood Thailand to create a delivery-only menu.

Comfort is one thing but let’s not forget to have some fun. Chefs need to be playful and no one knows this better than Chef Gaggan Anand, whose previous two-Michelin-starred restaurant, Gaggan, was voted the fourth best in the world in 2019.

Chef Anand has since opened a new restaurant, Gaggan Anand, after closing his first. Perhaps revived by this new direction, he has expanded to the mass market by teaming up with the popular Greyhound Café and GrabFood Thailand.

The resultant Lunch Box (and Dinner) Project meant Chef Gaggan’s creations such as chicken tikka masala rigatoni, nasi goreng komplit with Australian wagyu beef, foie gras and chicken curry puffs with truffle aïoli, and his mango-centric version of the classic tiramisu could be delivered to the doorsteps of eager foodies in Bangkok. Perhaps the star of this truly fusion “collab” is Chef Gaggan’s multigrain khao tom with smoked foie gras. Khao tom is a style of Thai rice congee served with patongko fritters (imagine tiny yau char kwai). The smoked goose liver would be the touch of decadence, in case you’re wondering.

To assemble this at home, after the food delivery rider has promptly dropped it off, is almost as enervating as the appearance of Chef Gaggan at your table in his restaurant. Fewer jokes and laughter, but there is still a smile on your face as you wonder how a professional would plate this.

When things get better, and they will get better, there’s always finding out first hand by visiting these restaurants. Who knows what these chefs, full of passion and perseverance, will think of next?