Sunday, 15 Mar 2015 8:05 AM MYT By Devi Asmarani
Follow us on Instagram, subscribe to our Telegram channel and browser alerts for the latest news you need to know.
By Devi Asmarani

MARCH 15 — The recent leadership change in Golkar, a political party that was a significant part of the government opposition, is seen as a victory for President Joko Widodo’s administration. In its national congress this week, the second most voted party chose Agung Laksono to replace its controversial chairman Aburizal Bakrie.

In no time under its new leader, the party jumped ship, leaving opposition Red-White Coalition to join up with pro-government Great Indonesia Coalition. More parties on his side means Jokowi, as the president is popularly known, will see his grip strengthened in Parliament, ensuring his policies are safe from legislative obstructions.

But as the president consolidates political power, he is losing significant support from the public who sees him as losing his momentum in fighting corruption in Indonesia. His poor handling of the events in the past month and a half has raised questions over his political independence, his decisiveness, and his commitment in eliminating corruption, perhaps the most crucial problem preventing Indonesia from moving forward.

It began in January when Jokowi submitted the name of three-star police general Budi Gunawan to Parliament as the sole nominee for National Police Chief, to the disappointment of many, because the latter has been named in previous reports as one of the police officers with suspiciously “fat” bank accounts.

A few days later, the Corruption Eradication Commission (KPK) named the general as a suspect in irregular financial transactions, thus beginning weeks of a tense stand-off between the police and the commission. The police followed suit by going after KPK’s top four officials, charging them with violations in cases that stretched as far back as 10 years — a move that smells too much of retaliation.

The attacks happened on all fronts, both legally and personally. Online, photos of KPK chief Abraham Samad — some appeared to be digitally doctored — allegedly revealed his premarital affairs. While he is accused of document forgery, his deputy Bambang Widjojanto was named a suspect in a 2010 perjury case over elections results. 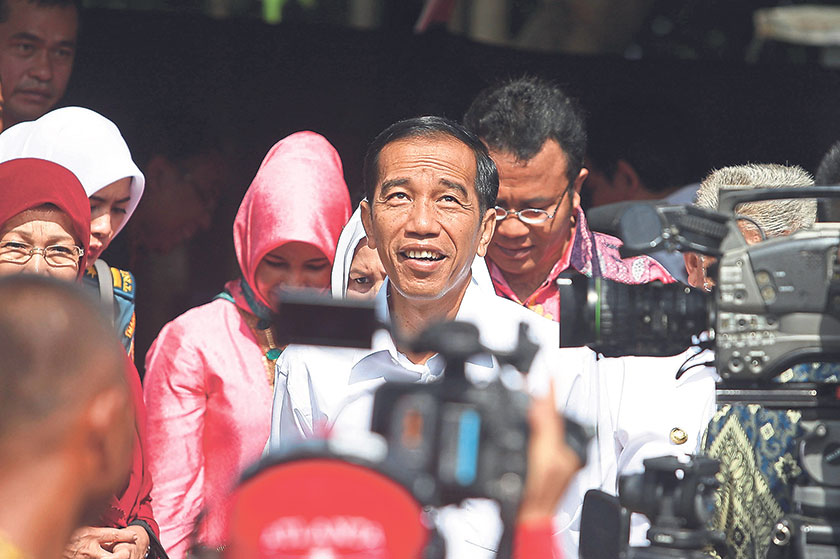 Indonesian President Joko Widodo speaks to journalists during his visit to Zero Kilometer, the northernmost point of the Indonesian archipelago, at Sabang in Aceh Province on March 10, 2015. — Picture by AFP

At the centre of this storm was the president himself, sitting indecisively and ambiguously for an uncomfortable period of time and worsening the feud. When he finally dropped the unpopular general from the nomination in the middle of February, it was seen as too little too late, and the decision was seen to be rife with compromise. He replaced both Abraham and Bambang, putting in place three interim leaders, including KPK’s former chief and retired police officer Taufiqurahman Ruki.

But if he failed to satisfy his supporters, neither did he impress his own party.

Among General Budi’s biggest supporter is Jokowi’s own party, the Indonesian Democratic Party of Struggle (PDI-P). The general was once an adjutant to PDI-P chairman Megawati Sukarnoputri while she was president in 2001 to 2004. His decision to drop Budi’s nomination split the party, with some strongly criticising the president.

His slow response to the feud seemed to have emboldened the police to become even more aggressive towards its critics. Despite Jokowi’s later appeal for the police to stop going after KPK and anti-corruption activists, they continued to pursue cases against KPK officials and other public figures who defended them.

These include former deputy minister of law and human rights Denny Indrayana and Tempo magazine, which published an investigative report on Budi’s financial activities. Last week, police demanded the National Commissions for Human Rights to apologise and retract its public claim that the arrest of suspended KPK deputy Bambang is a human rights violation.

Jokowi’s biggest lesson from this episode is that while playing politics is important to the survival of a presidency (his predecessor Susilo Bambang Yudhoyono’s legacy was his ability to keep his political enemies in check), he was not voted to be a sitting-on-the-fence kind of leader.

His handling of this episode cost him dearly. According to the Indonesian Survey Circle (LSI), Jokowi’s approval rating stood at 42.29 per cent in the last week of January compared to 71.73 per cent in August.

A leader of an independent team tasked by civil society organisations to look into the police-KPK stand-off, Syafii Maari, said the tension had turned the country into a “leaderless land.”

“Why does the president keep silent if the police are directly under his control?” asked Syafii, the former chairman of the one of the country’s largest Muslim organisations Muhammadiyah, last week.

That was exactly what was in the minds of many. Jokowi’s mishandling of the situation seemed to have unleashed the “monster” in the police, making it — as political analysts said — the biggest threat to democracy in Indonesia. It recalled the days of extrajudicial arrests of pro-democracy activists by the Indonesian military in the Suharto years.

“They use politics of fear to discourage people from telling the truth,” analyst Ikrar Nusa Bakti from the Indonesian Institute of Sciences said. “An appeal is not enough to tackle this. Jokowi must do something real.”

There’s a world of difference between campaigning and governing, but when it comes to fighting corruption, Jokowi seemed worryingly stuck in neither mode. The police’s seeming defiance threatens to reveal a weakness in his leadership, something he cannot afford so early in his administration. But even worse, he seems to be turning the other way to a concerted move to undermine KPK and weaken the fight against corruption, essentially reneging on his election promise.