When compassion gives way to arrogance

Tuesday, 08 Jul 2014 7:50 AM MYT By Aerie Rahman
Follow us on Instagram, subscribe to our Telegram channel and browser alerts for the latest news you need to know.
By Aerie Rahman

JULY 8 ― There was this guy ― a Hare Krishna follower ― who would cycle to my university every day at lunch-time. He would come with a big bucket of food.

A long queue would form and he would diligently distribute the vegetarian meals. Sometimes, one or two of those waiting for the food would assist him in the process. Donations were encouraged but were not prerequisites to getting the food.

I write this to record my appreciation to the Hare Krishnas. London is one of the most expensive cities to live in. It is a relief to have people like these who care about the underprivileged.

While writing for the student newspaper, I had the opportunity to interview the guy (he told me he wasn’t a priest). He told me he chose that spot because the location was strategic and the people who needed food were concentrated there. He also said that there were other Hare Krishnas who distributed food in other parts of London.

I found myself in that food queue a few times just so I wouldn't go through the day on an empty stomach. The Hare Krishnas are of course not the exception. During the month of Ramadan, Muslim groups camped in front of my university and gave out free food after “iftar”, irrespective of race or religion, or the fact that some chose to “break the fast” with wine.

The bottom line is this, these groups were motivated by one thing: compassion. They did not expect anything in return. No one needed to convert in order to receive aid, no one needed to even show gratitude.

Altruism is the basis of charity and it would appear that these virtues are absent in the Malaysian government’s worldview.

Poverty is not a crime

First, he wanted the giver and receiver of alms to be fined. Secondly, soup kitchens are to be banned within a radius of two kilometres from the city centre.

The reasons that he furnished were simplistic. He indulged in reductionism, homogenising all beggars as lazy and as such they will be forever dependent on soup kitchens. He also said that soup kitchens are dirty, drawing rodents that spread diseases.

Clearly, something is wrong here. Tengku Adnan recognises that there are homeless and indigent people in Kuala Lumpur. But instead of providing a constructive solution, he prefers to sweep the problem under the carpet by pushing them out of the city centre. The already invisible poor are to be further made invisible!

What is categorically unacceptable is the purpose that Tengku Adnan forwarded. He had the courage to tell us that these policies ought to be instituted in order to enhance KL’s image among tourists!

Tengku Adnan’s logic of poverty ― which is shared by our Welfare Department’s director-general ― reflects a poverty of logic.

Statements by these members of the government are cavalier at best, arrogant at worst.

Down and out in Kuala Lumpur

While one may choose to be an ascetic or a monk, no one chooses to live in destitution. The statements made by our leaders are downright dehumanising and humiliating ― not only to the victims but also to our intelligence. 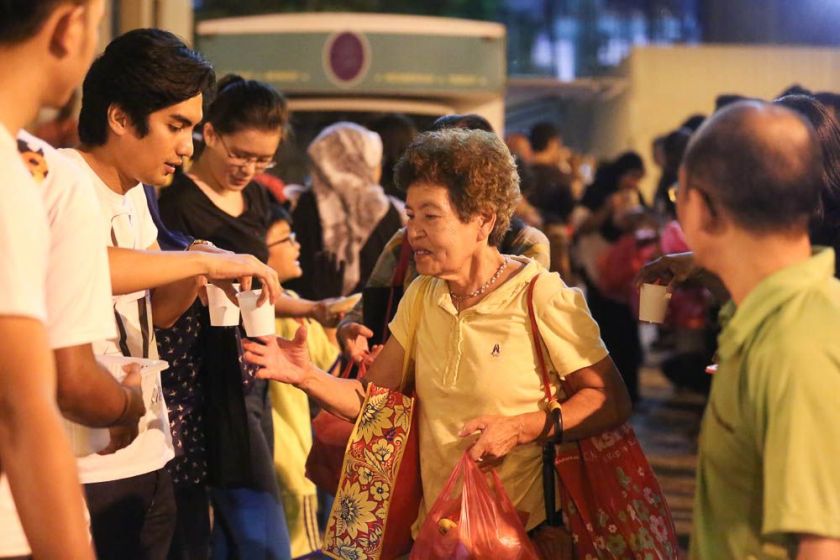 An elderly woman receives food given out by the Pertiwi soup kitchen at Jalan TAR, July 4, 2014. ― Picture by Choo Choy May

If the government was effective in minimising poverty and have their own mechanisms to feed the poor, soup kitchens wouldn’t have to be there in the first place. The long queues and the various soup kitchens in KL demonstrate that there are so many individuals who are dependent on them just to get by.

In effect, our government has already failed its people. It’s just that we’re too much of a forgiving lot to hold them to account.

Rather than proposing solutions to co-operate with NGOs, the government has arrogantly dismissed them and failed to consult them when giving their ultimatum.

For our ministers, who are ensconced in their ivory towers, they are not allowed to see suffering. Protocol forbids it. God forbid what would happen if a minister sees suffering, he might follow the path of the Buddha and forsake the material life!

Tengku Adnan acts as if he has never been to London. Take a walk on Oxford Street or King’s Cross and you’ll see that First World countries have beggars and homeless people as well. It’s a universal problem and it is part and parcel of urban life.

Poor people will always exist in capitalist societies. What differs is how you deal with them and how you treat them.

There are people who are impoverished materially, but they aren’t stupid nor do they lack dignity. If material wealth is the standard employed by the government to measure a person that just shows how low our government has descended.

Arrogance has dominated the administration who are blind to compassion. The best course for these people in order to preserve any shred of dignity is for them to show a little contrition.