Can you get Malaysian citizenship if your dad is Malaysian but your mum isn’t at the time of your birth? The Federal Court weighs the case of Boy B

Boy B is currently asking the Federal Court to decide if it is enough to have a Malaysian father in order for him to be recognised as a Malaysian citizen, or if other matters, including his birth outside marriage, would affect his citizenship bid. — Picture by Yusof Mat Isa
Follow us on Instagram, subscribe to our Telegram channel and browser alerts for the latest news you need to know.
By IDA LIM

KUALA LUMPUR, Feb 4 — Not many children have to face a citizenship crisis at age 10. That’s not the case for Boy B, whose birth father is Malaysian and birth mother is Filipina.

The boy, whose name cannot be published due to a court directive, has been seeking Malaysian citizenship since 2011, before he was even a year old, and has been repeatedly rejected over the years. His case is now before the Federal Court.

Boy B is currently asking the Federal Court to decide if it is enough to have a Malaysian father in order for him to be recognised as a Malaysian citizen, or if other matters, including his birth outside marriage, would affect his citizenship bid.

Boy B was born in the Philippines in September 2010 and travelled together with his parents a few months later to Malaysia where the couple married in February 2011.

Living in Malaysia with his parents since then and currently studying at a primary school in Petaling Jaya, Selangor, the boy has so far yet to be able to get the government to recognise him as a Malaysian citizen, despite various efforts including DNA testing which confirmed that the Malaysian man is his biological father.

As early as April 20, 2011, Boy B’s father had applied to the National Registration Department for his child to be registered as a Malaysian citizen through Article 15A of the Federal Constitution, but this application was rejected almost a year and half later on September 6, 2012 without any reasons given.

When he was six, Boy B and his father on November 11, 2016 filed a lawsuit through an originating summons at the High Court against the National Registration Department’s director-general, the Home Ministry secretary-general and the Malaysian government, in a bid to seek to have the child declared a Malaysian citizen and to be issued a certificate of citizenship and a MyKid or identity card issued to Malaysian children.

Having failed at the High Court in August 2017 and the Court of Appeal in February 2019 to obtain a court declaration that he is a Malaysian citizen, Boy B and his father appealed to the Federal Court and presented four questions of constitutional law to be decided on. Senior federal counsel Shamsul Bolhassan (right) today noted citizenship by operation of law means citizenship that a person automatically has upon birth, without having to make any application for citizenship. — Picture by Yusof Mat Isa

Today was the Federal Court’s hearing of the appeal by Boy B and his Malaysian father before a panel of seven judges, with the hearing conducted online through video-conferencing.

One of the key issues argued by lawyers today in the Federal Court was on whether B’s citizenship status should be decided based on his initial illegitimate status when he was born as his parents were not married then, or whether it should be based on his subsequent status as a legitimate child when his parents’ marriage a few months after his birth made him no longer illegitimate.

Section 1(b) provides that every person born outside Malaysia and whose “father” is — at the time of the child’s birth — a Malaysian citizen, would be a citizen by operation of law.

While the B’s lawyers argued that this meant that the only factor that would have to be met for B to be a Malaysian is for his father to be Malaysian, the government’s lawyer did not agree.

Senior federal counsel Shamsul Bolhassan today noted citizenship by operation of law means citizenship that a person automatically has upon birth, without having to make any application for citizenship.

Shamsul highlighted that the list of conditions to be fulfilled for automatic Malaysian citizenship are subject to the Federal Constitution’s Second Schedule’s Part III, which he said should be applied to interpret constitutional provisions on citizenship.

He cited Section 17 of Part III of the Federal Constitution’s Second Schedule, where it was stated that references to a person’s “father” or “parent” or “one of his parents” should be construed as referring to the person’s mother if the person is illegitimate.

He argued that this meant that for persons who are born illegitimate, the word “father” in the Federal Constitution when it comes to citizenship matters would refer to the person’s mother instead.

Shamsul acknowledged that the Legitimacy Act’s Section 4 provides that a child who was born illegitimate can be legitimised if the parents marry, with the child’s legitimisation to take effect from the prescribed date or from the date of marriage, whichever is later.

But Shamsul argued that Boy B was born out of wedlock to a non-citizen mother, and that the subsequent legitimisation of the child — through the parents’ marriage later — does not change the birth status of the boy as being born outside of marriage.

“The actual factual event in this present case is that the child was born out of wedlock to a non-citizen mother. It is submitted that subsequent legitimisation of the child does not have the effect of changing the birth status of the child.

Based on such arguments, Shamsul’s position was that Boy B is not entitled to Malaysian citizenship under Section 1(b) due to the boy’s illegitimate birth, arguing that the word “father” in Section 1(b) would refer to the child’s mother who is a Philippine citizen and that the child would not be able to take on his Malaysian father’s citizenship. 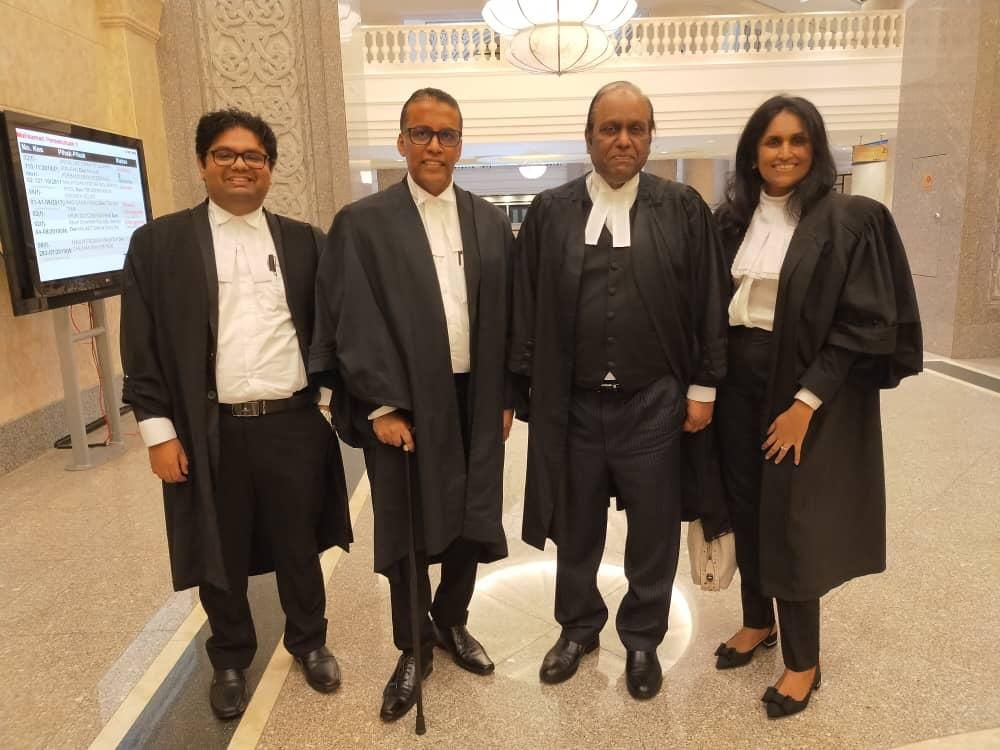 (From left) Pramod Nambiar, Francis Pereira, Datuk Cyrus Das and Sharmini Thiruchelvam are the lawyers who represented the child B in his bid for Malaysian citizenship. — Picture courtesy of Francis Pereira

The boy’s lawyer Datuk Cyrus Das however pointed out that Section 1(b) condition for automatic Malaysian citizenship focuses solely on whether the father is a Malaysian citizen at the time of the child’s birth.

He stressed that the only condition for a person born overseas to be entitled to Malaysian citizenship is that the father is a Malaysian at the time of the person’s birth.

“Article 14(1)(b) and Section 1(b) does not admit of any other qualification, other than the fact that the person born outside of the federation (of Malaysia) must have a father who is a citizen of Malaysia at the time of birth.

As for Section 17, Cyrus argued that the word “father” should only be interpreted to be “mother” for an illegitimate person at the time the person “is illegitimate” based on the present tense used in Section 17, and should not be applied retrospectively to be the child’s past status or when the child was born illegitimately.

Cyrus said that this meant that the parents’ marriage in February 2009 meant that the child B was from that time onwards a legitimate child, due to the legitimacy given to the child from the date of the marriage through Section 4 of the Legitimacy Act.

He said that this meant that the child B was no longer illegitimate, but was a legitimate person in 2016 when he first started his citizenship bid in the courts.

“Therefore under all those facts and circumstances, it is our submission that Section 17 does not apply to the facts of this case. Because on proper construction by applying the grammatical tense of which Section 17 is worded, it applies to when citizenship is sought and not at the time of the birth of the person who is seeking citizenship,” he said.

Based on his argument that Section 17 does not apply to the child’s B case, the word “father” in Section 1(b) would not be interpreted to refer to the child’s non-citizen mother, but would instead refer to his Malaysian father based on the child’s present legitimate status.

After hearing the arguments from both sides, the Federal Court said it will deliver its decision on another date to be fixed.

Lawyers holding a watching brief today were Larissa Ann Louis and Low Wei Loke both for the Bar Council, Ranee Sreedharan for Development of Human Resources for Rural Areas (DHRRA) Malaysia, and Jasmine Wong for clients in a similar citizenship case.